After hitting near-historic highs not long ago, the value of old corrugated containers (OCC) has dropped well below its price at any point in at least two decades.

For instance, a price sheet in June from fiber market research firm RISI indicated the price for the material at that point was at a 25-year low. According to RecyclingMarkets.net, the grade in mid-June was trading for a national average of $28 per ton, compared with $32 in May and $70 at the beginning of the year. The current price represents an 85% decrease from two years ago, when OCC hit a high of $180 per ton.

That’s bad news for recycling facilities and local programs because the fiber grade constitutes a large and growing percentage of the residential recycling stream.

“We have no choice but to store,” said Dale Gubbels, CEO of Nebraska-based First Star Recycling. “We’re sitting on quite a bit of it.”

The company is moving some of its OCC, but the movement is slow and prices continue to decline – Gubbels said he hasn’t seen prices this low for decades, since at least before First Star began operating in the 1990s.

With the consistent downward movement, many recycling operations have begun to wonder where the true OCC pricing floor is, or if there even is a “floor” in the current market.

“The question is, are we going to see a basement?” Gubbels said.

Factors converge to drive down price

Markets for residential recyclables, and fiber in particular, have been hit hard over the past couple years, pressured chiefly by international trade restrictions.

OCC has fared better than mixed paper, which hovers around negative $2 per ton nationally and which some operators in the Northeast say they are paying as much as $35 to get rid of. The OCC impact was somewhat tempered by the fact that the grade increased to record prices shortly before the China turmoil triggered a turbulent market. Experts last year noted that although OCC prices had fallen, they were still above their average over 10 to 15 years.

In recent months, however, OCC has pushed lower and lower.

“Some of this is the hangover, the long-term hangover of Asian markets sort of backing out,” said Joe Jurden, president of Kansas-based Cook Paper Recycling Corporation, a brokerage.

Although OCC, unlike mixed paper, is not banned from import into China, OCC shipments must be far cleaner than in the past. This, along with the general international market turbulence spurred by China’s new policies, has led to OCC price swings.

Jurden also noted a strong U.S. dollar is making it disadvantageous to export, and he postulated that some of the pricing is artificially low due to overreaction to the fast-shifting market.

“In a rising market, you get euphoria. It artificially stimulates the price up,” he said. “The same theory applies to a sinking market.”

“Right now you’ve got a situation where the pricing on OCC is so low that you are having a bunch of stuff dumped into landfills.” – Pete Watson, CEO of paper manufacturer Greif

Meanwhile, a MRF operator in the San Francisco area noted the current recycled fiber market is unlike anything he’s seen in his four decades in recycling.

“OCC was always one of the higher-value fiber streams compared to the mixed paper and the like,” said Louie Pellegrini, president of Peninsula Sanitary Service, which provides recycling service to multiple municipalities. He predicts the price has further to drop before the strife is over.

Like other facility operators, Pellegrini pointed to a variety of international factors influencing the market, including the slowing Chinese economy, the growing trade war between the U.S. and China, and ongoing adjustments following China’s recycled material import restrictions.

Peninsula’s OCC is being exported to Southeast Asia, as is much of the material generated in California. Cook Paper and First Star are selling the material to domestic buyers, according to the executives at those companies. 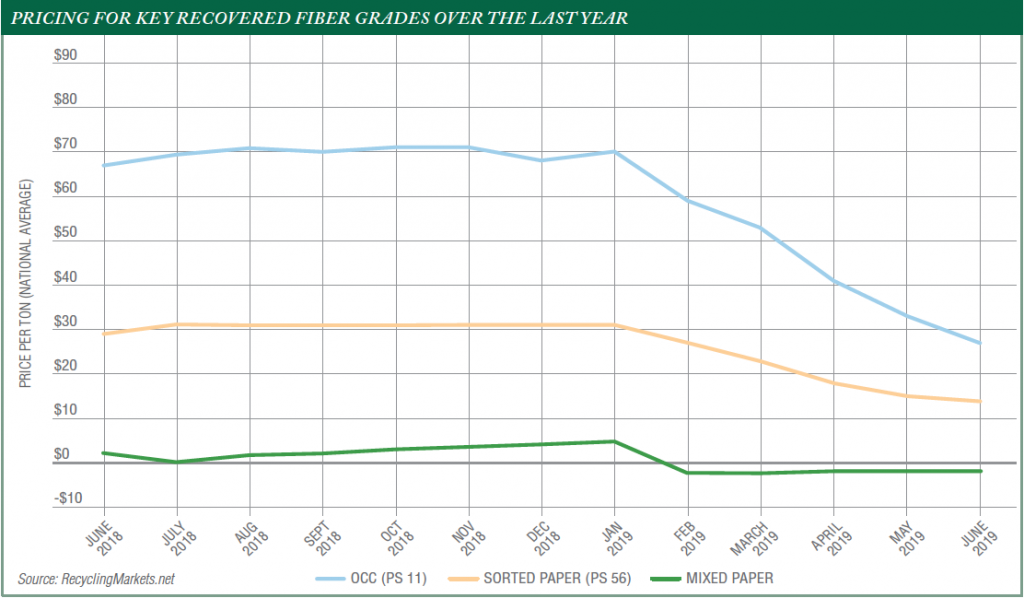 Tip fees are high enough that it’s still more profitable to collect and market OCC rather than landfill it in California, Pellegrini noted. But elsewhere, OCC is reportedly being disposed of due to the market downturn.

In an earnings call in early June, executives with fiber mill operator Greif touched on the trend. Company CEO Pete Watson commented that “right now you’ve got a situation where the pricing on OCC is so low that you are having a bunch of stuff dumped into landfills.”

Sources say the OCC landfilling is mostly occurring when haulers take loads directly to the landfill rather than the MRF. For the most part, companies are not landfilling OCC that’s been separated and baled. It’s a different story on mixed paper, where “we’re nearing the threshold for [it to be] cheaper to landfill it than collect it and process it and try to market it,” Pellegrini said.

In Arkansas, a nonprofit drop-off recycling center that funds itself primarily through commodity sales is feeling the pressure, according to the Magnolia Banner News. The newspaper reported that the Abilities Unlimited recycling organization, which makes most of its money from OCC sales, is asking its local government for financial support, citing rising costs and falling income from the market shift.

It’s a similar situation in North Dakota, where a drop-off recycling operation recently ended public service. The owner of the Carrington, N.D. facility, 4R’s Recycling, told the Jamestown Sun newspaper that cardboard has carried the business financially in the past and that the business hopes to reopen public drop-off if OCC prices come back up. In the same article, another North Dakota recycling company said OCC is “what everybody counts on to make a profit.”

Jurden pointed to another potential shift driven by the pricing slump. Some collectors make the rounds to small commercial generators, picking up a couple bales at grocery stores each week. That type of service, which likely would have been covered by OCC revenues in the past, has become less economically viable as prices push lower. At some point, particularly in areas without landfill bans, generators may decide it’s not worth the extra cost to recycle the material.

Meanwhile, MRFs continue receiving load after load of the material in the residential recycling stream, and even if they can get by for now, it’s a delicate balancing act. Gubbels of First Star said his facility has filled up most of its interior storage space and is already storing OCC outdoors, creating an additional time crunch.

“You can only keep it outside for so long before you will be landfilling it because the mills aren’t keen on sun-bleached paper,” Gubbels said.