Q&A: Rolling with the markets

Kerry Getter is not a man prone to hyperbole.

Here, for instance, is how the MRF executive described his company’s perspective on the blended value of material in the curbside stream, which has fluctuated enormously of late: “We lick our wounds when it goes down, and we celebrate when it goes up.”

Such a matter-of-fact sentiment from Getter makes sense, considering his industry experience. In 1994, Getter founded Austin, Texas-based Balcones Resources, and he has been at the helm throughout. The materials recovery facility company now processes a total of roughly 21,000 tons per month with operations in Austin, Dallas and Little Rock, Ark.

In the Austin market, Balcones is today the primary sorter of residential material, having signed a 20-year processing contract with the city of Austin seven years ago. And the company is investing to stay competitive amid today’s recycling market challenges, announcing in February it would be putting $5 million toward sortation technologies.

With Balcones having just celebrated its 25th anniversary, Resource Recycling talked with Getter about today’s recycling markets, the importance of stakeholder partnerships, the keys to building a strong staff, and why he is definitely not about to stop accepting curbside glass.

Resource Recycling: Your company is very closely aligned with the city of Austin, which is known as a recycling leader in many ways. Could you talk about your relationship with the municipality?

Kerry Getter: We’ve got what I consider to be a very good relationship with the city. We are seven years into a 20-year agreement, but prior to the formal agreement, we had been in this market for 18 years and had established a reputation and working relationship with the city. We work hard being good citizens where we live and work, and I think the city has been very appreciative of that. And we work even harder on that relationship than we have in the past. We have regular meetings scheduled with them to discuss the realities of the marketplace. They get a monthly report from us with comments related to the market and pricing. We perform material composition studies with them where we look at the residue that is not recyclable but is present in the stream, and we’ve been involved in education initiatives. I think our goals are aligned in that regard. 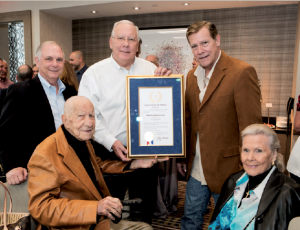 Kerry Getter (in white shirt), CEO of Balcones Resources, stands with his family and holds a letter of recognition from Greg Abbott, the governor of Texas. The photo was taken at an event in February celebrating Balcones’ 25th anniversary.

What is the hauling situation in Austin for residential recycling?

The city collects their own materials, running its own fleet of trucks and hauling residential material to us for processing. There are also third-party haulers, like Waste Management and Waste Connections, that have contracts with other municipalities and they bring material to us under an agreement. In addition to Austin, we do processing for 15 or 16 other municipalities in the Central Texas region.

Let’s talk about National Sword and the import restrictions in many Asian markets on recycled material. How has that affected your company?

It has certainly had a negative effect on pricing at the mills where we have relationships. Price has been the biggest challenge. But everyone in our industry plays in the same sort of prices at different mills within our region. We have been fortunate in that we have contracts for all the materials that have been subject to discussion in China. We have contracts to sell all of our plastics – our 3-7s and our mixed rigid plastics. And we also have contracts to sell all of our mixed paper and the OCC. From a material movement perspective, we’ve really seen very little difference in the pre-Sword and post-Sword eras, if you will. As a company, we turn our inventory over about three-and-a-half times per month.

So even though you have contracts in place, the pricing situation has not remained constant?

Over the years, we have shared in the upside and shared in the downside with our customers. All of our significant contracts are designed to reflect what’s going on in the market. … We try to manage that pricing situation on materials much like a bank would try to manage its interest margin. We try not to get squeezed, but every once in a while, the markets go through this kind of challenge and our inventory is devalued. But the markets can go up as well.

With everything that’s happened with markets of late, does that 20-year agreement with the city of Austin still seem balanced?

There was a balance of risk-sharing built into it [when it was signed] seven years ago, and after the first 36 months there was an opportunity to re-price the agreement, so that would have happened around 2015 or 2016. We did so then, but it was a negotiated deal back when prices were still relatively decent. The same will happen again in another couple of years. So it’s not constant for 20 years. We think it’s fair, and I believe the city of Austin thinks it’s fair. We share the commodity risk, and there’s a processing fee involved. That’s been the case since day one. That’s how we do it with all our relationships.

Does that processing fee vary?

It shifts based on the amount of volume. If the volume goes down, the fee goes down. We’re trying to encourage higher volumes.

Is the $5 million you’re investing in sortation equipment a direct response to National Sword?

I don’t know that it’s a response to National Sword. There is a difficulty in keeping sorters and general labor on site, and I think it’s as much a response to that challenge as it is to making cleaning materials. We don’t hire temps in our company, and the turnover in sorters is higher than in anything else. We’re going to put in Austin three opticals and anywhere from two to four robots. When we built our facility seven years ago, we created placeholders for additional equipment and we’re going to take advantage of that design. Most of the equipment we’re buying is from CP Manufacturing and AMP Robotics. I just got back from Denver to visit AMP and what they’re doing holds a lot of promise and is really a look into the future of what’s going to happen with MRF sorting.

What about that robotic technology is so exciting to you?

Their robots are doing in excess of 80 picks per minute, which is pretty significant. They’ve been able to train their robots to sort a wide variety of materials, paper included. So we’re excited about their technology and what they have to offer. And in respect to CP Manufacturing we’re buying three opticals from them and some screens to enhance our throughput and clean up some of our paper stream. The smaller pieces of OCC we’ve seen in MRFs over the last couple of years we expect to capture with these optical sorters. 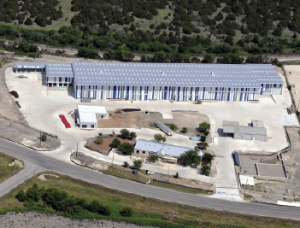 The Balcones MRF in Austin, Texas.

Another big talking point in curbside programs is glass, which some processors want out of the stream because it can be a contaminant. What’s your take on glass?

There’s a lot of glass in Austin – there’s a lot of beer and wine drinkers. In fact, 27 percent of our stream from the city of Austin is glass. We have a pretty aggressive glass recovery cleanup system. We produce between 1,500 and 2,000 tons of glass per month overall, and we’ve got a wonderful relationship with Strategic Materials. We just started putting in some additional cleaning equipment here and we’ve got some other plans in place to address glass quality and stay on top of that. It’s a big part of what we do and a big part of what the city of Austin expects us to do.

How has that relationship with Strategic Materials been helpful (aside from the fact they are of course taking the material)?

They are located a little bit south of Dallas, about 160 miles from us here in Austin, and they have been very sensitive to the transportation needs we have. I would give them a solid grade of “A” in that category. From the communications perspective and having us understand what goes on with them and what their needs are, I would give them a darn good grade as well. Also, we’ve needed some help here recently because some of our equipment is getting a little long in the tooth. They’ve helped us with some maintenance and upgrade suggestions. It’s been a good relationship from our perspective, and I hope they would say the same.

When you think back on the last 25 years, what has really fueled the viability of Balcones and what have been the biggest challenges?

The biggest factor that has spurred our growth is the type of people we’ve been able to attract to the company as employees and shareholders. We have a terrific board of directors. The biggest challenges we’ve faced are really the challenges that everyone else in our industry faces, and that’s creating economies of scale considering the high fixed costs associated with running facilities on a monthly basis and the variable revenue stream on the commodity side. So creating a situation where we’ve been able to insulate ourselves from some of those markets has probably been the biggest challenge.

How have you been able to attract those skilled people at the heart of the company?

From a management perspective, I’ve been involved in the hiring since the company’s inception. We don’t necessarily look for folks who have direct experience in our industry. We look for folks who are passionate about what they do, who are intelligent, who are visionary in their own right and have the ability to be leaders. If we can get folks in the door who want to join Balcones because to them it represents a career and not a job, then we have done something. We don’t hire people to work for Kerry Getter or for Balcones. We try to hire people who share a vision.

Over the next five to 10 years where will Balcones be putting its focus to continue to grow and stay ahead of the market?

In the immediate future, our focus in going to be on utilizing technology wherever it works for us. And whether that’s mechanical sorting of some sort or whether it’s optical sorting or robots, we want to stay on top of what’s most advantageous for us, what’s most cost-effective. I think that’s the most immediate need. We’re also interested in growing and making acquisitions in the markets where we currently have a presence, and we’re interested in growing in other markets in the Southwest where we have some influence. We’d like to be more involved in Houston, in San Antonio and certainly more involved in North Texas and Arkansas. So I would say technology and growth are probably the two primary areas of focus. And, naturally, we want to continue to make money.