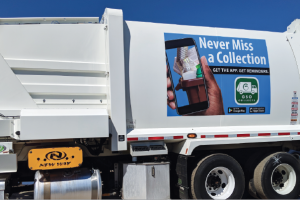 Bucking the usual trend of recycling programs evolving from dual- to single-stream service over the years, the city of Greensboro, N.C. has run a cart-based single-stream program since day one, all the way back in 1992.

That means the city has had nearly three decades of commingled recycling experience. And over the years, the recycling department has learned the importance of outreach and communication with residential recycling customers – so much so that the city last summer launched an expansive communication and cart-tagging campaign to spread the word on maximizing the stream’s cleanliness.

Consistency through the years

Greensboro has city collection crews service recycling customers, and the city has sent its recyclables to the same MRF since day one. The facility, which has had a number of operators and is currently run by Republic Services, is located just down the street from the recycling department.

That’s not to say there hasn’t been change. Collection switched in 2008 to every-other-week instead of weekly service. And, like other communities, the city recently considered changing the materials it accepts in the curbside cart as market shifts have taken place. Currently, the city accepts paper, metal, plastic and glass, and it also allows some unusual items, including metal pots and pans, large rigid plastics and more.

Last year, the city collected 25,000 tons of recyclables, and it achieved a diversion rate of 24 percent as calculated by the Municipal Measurement Program (MMP), which was launched early this year by Re-TRAC COnnect and The Recycling Partnership.

Carle noted one of the hurdles of having always had a single-stream program is that the city hasn’t had the sort of at-the-curb contamination education that comes with a dual-stream program. To respond to those difficulties, the city has taken a variety of educational and enforcement measures.

That single inspector touches about 5 percent of the roughly 90,000 residences in the city, Carle said. That’s clearly only a small portion of households, but “the impacts that he does have are huge wins,” Carle explained.

Last July the inspector began using tablet-based software. “It really streamlines his ability, instead of writing everything down he’s able to virtually tag, so we can keep a record,” Carle said.

The city leaves stickers on the cart lids, providing direct feedback to residents on their recycling quality.

In another contamination reduction push, the recycling department equipped collection trucks with tablets, allowing drivers to easily log when and where they come across contaminated loads.

“When they see contamination either sticking out of the can or in the hopper, then the driver virtually tags that address,” Carle said. “They might not be able to stop the contamination from getting to the MRF, but at least we know it was there. We’re able to track it.”

To avoid the major delays that would be caused by drivers exiting the vehicle to physically tag the cart, drivers simply log the address on the tablet app. Then, every day, the department runs reports for the addresses noted. Department employees create postcards for all the addresses, explaining which day the cart was inspected and what the problems were.

The postcard indicates whether it’s the first, second or third violation for that address within a six-month period. If there are more than three violations in that time frame, the city removes the cart from that address. 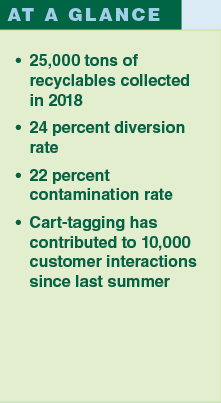 Education is focused on particularly problematic contaminants, notably plastic bags, which were responsible for 50 percent of all contamination tags in the first six months of the tagging program.

Many touchpoints with residents

Last year, from July through December, the city sent out more than 6,000 postcards, Carle said. The program has also increased communication between the public and the recycling department in other ways.

“In eight months, we’ve had over 10,000 interactions with residents,” she said. That figure takes into account postcards, phone calls from residents, social media interactions, email exchanges and more.

Although not all of those interactions start out positive – sometimes it’s an angry caller or social media poster complaining about the cart-tagging program – the exchanges give the department a chance to spread the word and potentially help the resident in question understand the recycling program better. Carle reminds the resident that infrequent contamination isn’t going to cause them to lose recycling service, only repeated and unchecked violations.

“It’s an opportunity for them to correct their mistakes and help us to clean up the recycling,” she said.

Currently the city has a 22 percent contamination rate. That rate, however, was tabulated before the recent updates to the tagging program, and the city is planning a recycling audit in the next couple months, which will bring an updated contamination rate. And so far, the indications suggest positive results: A chart shared by the Greensboro recycling department shows there were 6,743 “first violations” receiving tags from January 2018 to March 2019. “Second violations” were just 880 and “third violations” were 164.

Just 38 carts were removed due to too many violations in that period.

In another initiative utilizing technology, the recycling department rolled out an app for residents to track which materials are recyclable and on which days collection takes place.

One of the great opportunities with that technology, Carle said, is that the app automatically alerts users about their recycling collection day. On the back end, the city department can shift those days as needed, and the user will be notified by the app.

For example, when a collection driver misses 200 houses for whatever reason, in the past about 75 percent of those homes would call the city about the missed collection. City employees would explain what happened and inform the customer their material would be collected the following day.

But in a recent missed-collection incident, Carle was able to use the app to select the homes that got missed and then send them a notification letting them know that a truck would be by the next day.

“I found out the next day, we had three calls,” Carle said. “I thought that was a really fun way to provide customer service that really went above and beyond what is typically expected from municipal communications. We’re really able to be proactive instead of reactive.”