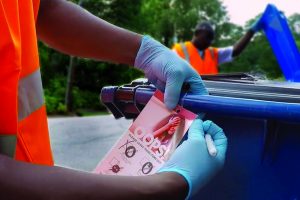 As the need for a cleaner stream becomes clear, haulers and local programs are taking steps to reduce contamination. Some enforcement tactics are proving unpopular among the public.

In the San Francisco Bay Area, for example, local media recently highlighted Republic Services’ move to implement contamination fines. Local residents told ABC 7 News they were unhappy with being charged $26.60 per infraction, but their contention was more about what they described as a lack of communication about the fines. According to Republic, detailed information about violations was available for residents who called.

In the end, city officials responded by issuing a cease-and-desist order, ABC reported, and decreeing that Republic must refund all the fine money. The company agreed but has indicated plans to seek the legal ability to implement a contamination fine in its next contract with the city.

This practice is bringing recycling market problems into focus among the public in a big way – and Republic is far from alone in seeking to penalize contamination. But one industry group believes robust outreach followed by cart rejections, if necessary, is a better approach than fining.

When markets were upheaved by China’s decision to ban imports of key curbside recyclables, each player along the recycling chain naturally pushed responsibility back upstream. The chain reaction is simple: If Chinese importers can’t accept the material, U.S. exporters are left with a growing stockpile and few options for moving it. Brokers begin taking less material from MRFs, which begin taking fewer loads of contaminated recyclables. The hauler ultimately tightens what it will accept.

How the hauler enforces the rules is increasingly a controversial matter in local programs. Some programs opt for a simple outreach and education plan. But increasingly, haulers are seeking to fine customers.

In Nevada City, Calif., the nation’s largest hauler sought the ability to levy a contamination fee for repeat violators. In the proposal, which was approved by City Council, Waste Management laid out a fee scale based on the number of occurrences per year. Contamination was identified as a recycling cart containing 10 percent or more non-accepted materials.

“Because at that point, it becomes a behavior pattern that they’re not willing to change,” Tisha Gill of Waste Management told Nevada City councilors when the proposal was introduced. “We hope that the charge will convince them to maybe change that behavior.”

If the customer continues to contaminate more than four times, Waste Management can remove the recycling cart and stop serving that household for up to one year.

A similar proposal was rejected in nearby Grass Valley, Calif., where city officials instead asked Waste Management to try another community education program before implementing fines, according to The Union newspaper.

In Reno, Nev., Waste Management has had the ability to levy fines for years, according to the Reno Gazette Journal, but the company has only recently begun utilizing that tool. During the fall, recycling enforcement ramped up in Lowell, Mass., where collection staff started fining contaminators $25 per infraction.

“We have not seen any data that supports fining being anymore impactful than consistent/standardized rejection of carts,” said Cody Marshall, vice president of technical assistance for The Recycling Partnership, in an email.

When public agencies issue fines, it can also create an added burden on department budgets that are already tight, he said. Fining involves tracking addresses, leaving tickets and then following up to ensure tickets are paid.

“If communities feel they must start fining, we hope that they put a large effort into messaging and educating to residents about the program beforehand,” Marshall said. “You would not start fining for speeding without putting appropriate speed limit signs in a community. And enforcing contamination is a lot more subjective than speeding, so it takes quite a bit of education to inform residents on the dos and don’ts.”