Set up for success

Getting people to recycle is a challenge. Getting them to recycle as much as they can and to do it correctly can feel impossible. After all, different materials and housing environments present enormous barriers when encouraging recycling.

That notion is particularly clear when trying to recover food scraps from multi-family buildings. Is success in that realm even possible? The answer is yes – but an understanding of the human factor in changing deep-seated attitudes and behaviors is a requisite for success.

A food scrap collection pilot program in the Stuyvesant Town (StuyTown) residential complex on the east side of Manhattan shows how residents of multi-family apartment buildings can be encouraged to separate out their food scraps for composting efficiently and effectively.

When food scrap collections were introduced at StuyTown in 2016, a 23-gallon cart lined with a large BPI-certified compostable bag (Biobag brand) was placed in the basement of each building, and collections were made three times a week by the New York City Department of Sanitation (DSNY). Residents were initially provided with a leaflet telling them about the new collections and a list of what could and could not be put in the cart.

Consulting firm Eunomia Inc., along with the Italian Composting Association and bag manufacturer Novamont, in collaboration with StuyTown, carried out a 12-week pilot program in the fall of 2017 to investigate the best options for increasing residents’ engagement with the food scraps program. (The Italian Composting Association was included because the group had successfully engaged in similar projects in densely populated areas of Italy.)

The aim of the project was to see which measures would increase participation, maximize capture rates and minimize contamination. The pilot ran in six buildings, containing a total of 636 apartments and 1,375 residents.

In developing the plan for the pilot project, the leaders of the effort focused on the “6Es” – six steps that can help shift behavior and maximize the impact of any recycling and waste-prevention program. The strategy is already used by many in the U.K.

The Es, displayed in the figure above, are described below:

From theory to implementation

How were those six key considerations put into action at StuyTown?

First, a baseline evaluation of participation and capture rates was undertaken during the first four weeks of the pilot. This showed that, across the six buildings studied, an average of 4.14 ounces of food scraps were being collected per person per week, resulting in an initial average capture rate of 18.9 percent.

The project then moved into the first E – explore – by investigating the issues that were causing such low recovery and determining ways to address them. Common barriers to higher materials recovery are very often tied to ease of use, and the solution here is simply to make the service convenient for users. A second issue, specific to food scraps, is the “yuck” factor – the slime, smell and general unpleasantness associated with food waste as well as problems with pests and vermin. The StuyTown trial examined both of these barriers to see what combination of interventions would overcome them and encourage more people to use the service.

During the trial itself, the six buildings were put under different conditions, which are laid out in Table 1 below.

Building 1 was given educational material so project leaders could determine the impact of a reinjection of communication. Buildings 2, 4 and 6, meanwhile, were provided with 13-gallon floor bins, which were placed on each floor next to the trash chute. These were collected at least three times a week. Residents in these buildings were also given further communication about what could and couldn’t be put in the floor bins. 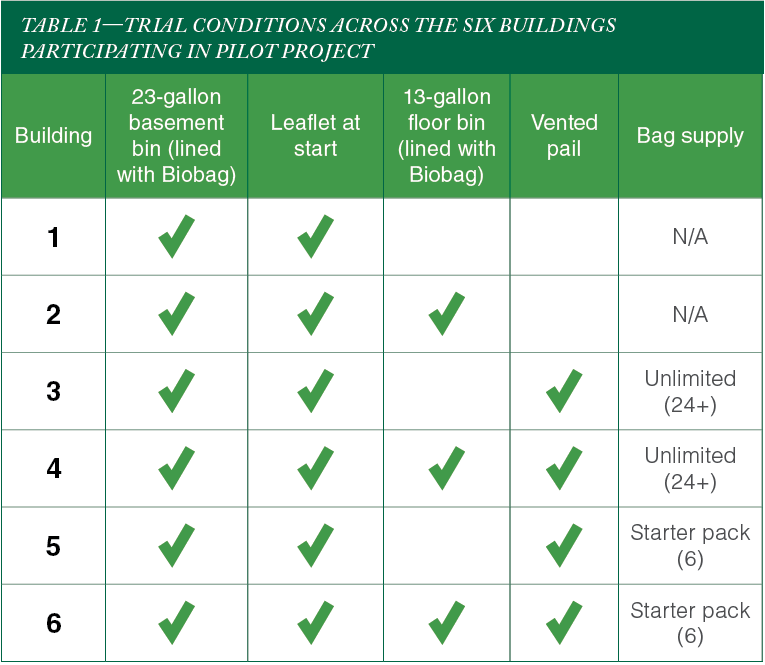 Moving on, all residents in Buildings 3, 4, 5 and 6 were given a vented kitchen pail, which they could empty either into the floor bin or the 23-gallon basement bin, depending on what other tools they were given. Those provided with a vented pail were also given a supply of Biobags: Buildings 3 and 4 received an unlimited supply, and residents in Buildings 5 and 6 received a starter pack of six compostable bags along with information of where they could buy more and a coupon for their first purchase. The aim of this was to see whether residents would go out and actively buy Biobags when they were no longer being supplied for free.

These interventions leveraged different aspects of the 6Es to address barriers:

What worked and what didn’t

The results of the pilot program are presented in Table 2 below.

Buildings 4 and 6 saw the greatest improvement, each reaching capture rates of over 60 percent. Not surprisingly, these two buildings had interventions that addressed the most barriers. Building 2 was the next most successful, with an average capture rate of 57 percent. Building 3 came in at 43 percent, and Building 5 experienced just a small increase in capture rate.

Building 1, which only received basic information about the system and no extra support, saw no increase in capture rate.

Overall, the presence of a floor bin made the largest impact on the amount of food scraps collected. The buildings with floor bins achieved increases in food scraps capture from the residual waste stream of between 200 percent and 400 percent. This is attributed to two interventions. First is the “enable” factor at work – floor bins are more convenient for residents because they mean individuals do not have to go down to the basement to deposit their food scraps. Then there is the “engage” element – the floor bin acts as a daily visual reminder of the food scraps recycling service. 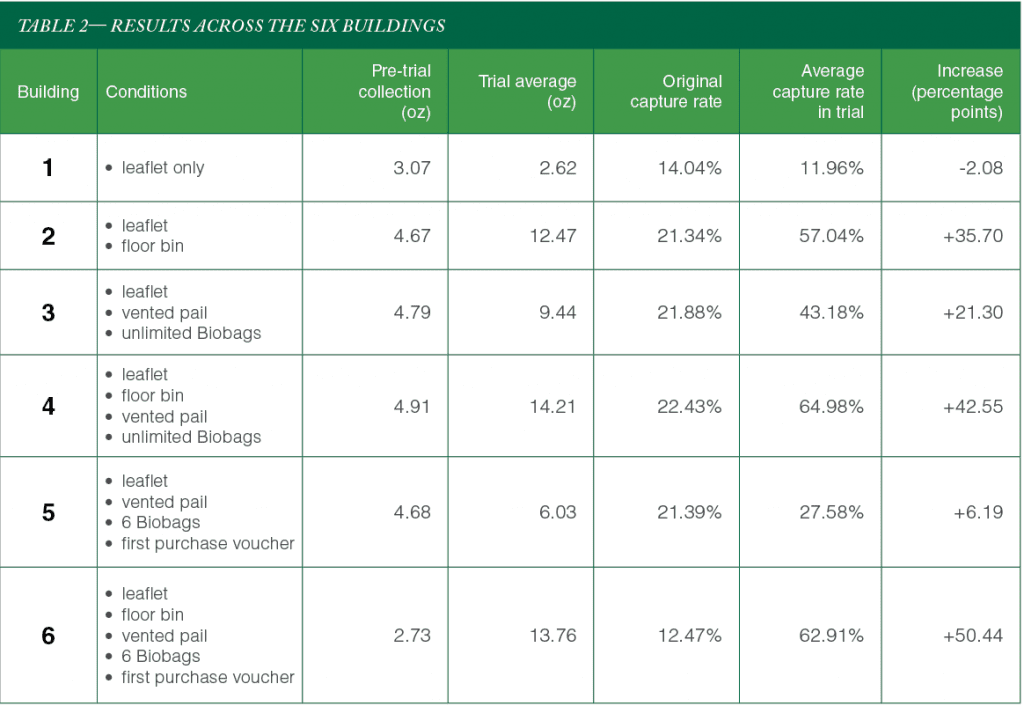 Having a continuous supply of free Biobags – this is an example of “encourage” – also played an important role, with the highest capture rates being achieved where residents had access to an unlimited supply of bags as well as a floor bin. The compostable bags also played a key role in reducing contamination levels.

However, it’s important to point out the buildings with floor bins, despite achieving the highest capture rates, also suffered from the highest contamination rates.

Buildings 1, 2, 4 and 6 had the highest contamination, and this is partly attributed to more improper disposal caused by the increased levels of participation, as well as people simply putting garbage in them. Buildings 3 and 4, in which residents received unlimited supplies of biobags, had the lowest contamination rates during the trial.

Still, overall contamination in the pilot project was less than 5 percent, which is extremely low in the wider context of food-scrap collections.

Also worth noting is that the use of Biobags increased across all of the participating buildings, especially in those with access to an unlimited supply of bags. In Building 4, the use of Biobags reached 91 percent, almost eliminating the use of traditional plastic bags.

The post-trial questionnaire confirmed that convenience was the biggest factor in driving behavior change. Over 45 percent of residents stated that the presence of the floor bin was the most helpful tool, with the starter set of compostable bags and the kitchen caddy identified as the second and third most helpful, respectively.

Barriers to convenience have the potential to be eradicated completely when recycling and waste management best practices are factored into the design of new multi-family developments. In the summer of 2018, Eunomia completed a study on waste in large buildings in the U.K. to model potential recycling systems for multi-occupancy dwellings. It considered a range of factors to ensure that participation and recycling rates would be as high as possible.

When key aspects – such as the distance traveled from the residence to the bin storage areas, ease of access and the volume of kitchen bins – are considered in the design of buildings, participation is much easier for residents and participation rates will consequently be much higher. The report examined the benefits and issues with communal bins, gravity chute systems and public realm deposit points.

The inclusion of these easy-to-use waste systems in the core design of the developments enables residents to make the most of their recycling systems. There are municipalities in the U.S. that are doing exactly this. In fact, Eunomia is currently working with the city of Raleigh, N.C. to produce guidance for developers and architects of multi-family and commercial buildings to ensure waste and recycling systems are integrated into their designs and can be approved before development starts.

Those projects and pilot efforts like the one at StuyTown show that behavior change around multi-family food scrap collection is possible, leading to recycling systems that are much more effective. The main hurdles can be tackled by providing housing managers and developers with the right tools and knowledge around operations and infrastructure at the beginning of the design process, and the rest falls into place with consistent and persistent communication to residents.