Nevertheless, programs in a number of small towns and rural jurisdictions in Maine, Massachusetts and Vermont show that food scrap recovery can gain momentum – and be cost effective – in these environments.

The keys to success will not surprise most veteran recycling coordinators. The programs outlined in this article have flourished thanks to solid strategic planning, dedication on the part of local stakeholders, and a focus on resident education and involvement.

From pilot effort to financial boon

Through the initiative of its contracted waste and recycling hauler, Brattleboro, Vt. (population 12,000) jumped ahead of the requirements of the state’s universal recycling law (see sidebar on page 48) with a pilot curbside food scraps collection program. Triple T Trucking, which had been hauling commercial organics since the early 2000s, offered to start the pilot with no additional cost to the town.

The pilot, initiated in 2013, started with 150 participants. The town hired a part-time organizer to work on promotion and enroll participants.

Meanwhile, the Windham Solid Waste Management District (WSWMD), which includes Brattleboro, applied for a “small food waste composting permit” from the Vermont Agency of Natural Resources (ANR). Having available land in a suitable location, a front loader, and an executive director (Robert Spencer) with decades of organics management experience, helped ensure success for the budding partnership.

The pilot went town-wide in 2014 with free curbside food scrap collection offered to all 5,300 households (including multi-family properties with up to four units). The expansion resulted in an average weekly collection of 4.5 tons of food scraps and soiled paper.

With the adoption of state-mandated pay-as-you-throw trash disposal in July 2015 (residents had to begin paying $3.00 per 33-gallon bag for trash), collection of food scraps more than doubled to 9.5 tons per week.

By switching to every-other-week trash collection in 2016, Brattleboro’s food scrap diversion grew to 10.3 tons per week. By 2018, the town was diverting 64 percent of its waste stream through recycling and organics diversion.

The WSWMD compost facility now processes 605 tons per year of food waste (and soiled paper) from the Brattleboro curbside collection, along with 627 tons per year of commercial and institutional food waste. An additional 1,035 tons of paper sludge (a nonhazardous byproduct from a papermill) is also processed. Tonnages have increased significantly over the past two years, particularly on the commercial side.

The tip fee is $50 per ton for food scraps. No tip fee is charged for yard trimmings because the compost operation runs short on needed carbon materials to mix with food scraps. The operation is “low-tech,” using turned windrows. WSWMD employees take a Vermont ANR one-day course to become certified compost facility operators.

The facility is a cash-positive operation. As the chart above shows, the facility ended fiscal year 2018 with a surplus of $43,746. WSWMD staff costs for the operation include an operator mixing incoming organics on a daily basis and monitoring pile temperatures (about one hour per day), program administration, and compost marketing. Other costs include rental of a screener and a contractor hired to operate it.

The compost product is branded as BrattleGrow Compost. Retail distributors pay $25 per cubic yard for screened compost, which is sold to customers for $40–$45 per cubic yard. In fiscal year 2018, more than 1,800 cubic yards of compost was sold, with $40,517 in revenues to WSWMD.

This win-win situation saves the town of Brattleboro approximately $35,000 a year in reduced tip fees (landfill tipping charges locally are $105 per ton).

Another solid waste district in Vermont has also worked to bring food scrap processing to a centralized location.

The facility is located in Johnson (population 3,297) where a long-dormant sewage sludge compost facility has been repurposed to compost up to 10 tons of food scraps weekly. Lamoille Soil was developed in partnership with the village of Johnson (which allows the district to use the facility infrastructure at no cost) and with startup financial support from the Northern Borders Regional Commission.

Food scraps are accepted at all six LRSWMD transfer station drop-offs and transferred to Lamoille Soil. Residents are charged $1 for every 5 gallons of food scraps (waste disposal is $4 for a 30-gallon bag). Private haulers collecting food scraps from commercial establishments are also encouraged to tip at the facility.

Lamoille Soil opened in October 2017, with 23 tons of food scraps processed during the remainder of that year. This year, 17 tons of food scraps had been processed as of July. Screened compost is available for purchase at the district’s drop-off sites at a cost of $5 for a 5-gallon pail, or in bulk for $50 per cubic yard at the facility. LRSWMD is also working with member towns to use the Lamoille Soil compost in municipal projects.

Currently, the district covers operation costs, and the operation is anticipated to become cost-neutral by 2020.

The Ludlow Area Community Garden, also in Vermont, began its community food scrap composting operation in 2017. The garden serves Ludlow, population 1,963, and Cavendish, population 1,367. The garden’s “compost team” members were already composting garden waste, but they wanted to incorporate food scraps from the homes of people who were members of the garden. 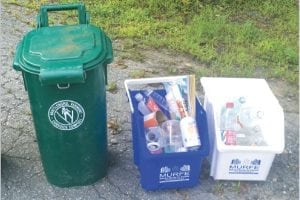 The town of Brattleboro, Vt. launched a pilot curbside food scrap collection project in 2013. The effort has been expanded across the municipality and has helped Brattleboro achieve a 64 percent waste diversion rate.

Members also sought to establish a demonstration site for providing outreach and education about composting. Wanting to make food scrap composting as appealing and accessible as possible, their system showcases different types of bins and tumblers.

Around 90 percent of member gardeners participated in the first year, and compost outreach was extended through the organizing team’s connections with two Windsor County youth shelters. When the garden closed for the winter, a large bin installed at the girls’ shelter continued operation through the winter.

The compost team notes that contribution of food scraps decreased toward the end of the 2017 gardening season, in part because many of the gardeners had started composting food scraps at home. Since promoting home composting was one of the site’s educational goals, the team took this as a positive sign.

In the spring, the garden compost site resumed full swing. All bins and tumblers were emptied and a sizeable volume of rich, ready-to-use compost was collected. The garden resumed collecting food scraps and filling their bins and tumblers.

This year, the compost team stepped up its efforts by providing a compost tumbler for the Windsor County boys’ shelter. The boys have been coming to the garden almost daily so they are familiar with food scrap composting and will be able to run the tumbler for most of the year. The girls’ shelter uses the ready compost for its flower garden, and the boys’ shelter will use their compost for their vegetable garden on-site.

This summer, the Ludlow garden has welcomed many visitors from Massachusetts, New Jersey, New York and Pennsylvania as well as local residents and organizations such as the University of Vermont Extension Master Gardener Program and the Vermont Community Garden Network.

Another case study from the Green Mountain state shows how effective sites can be established at multi-family complexes (even when some residents have initial concerns). 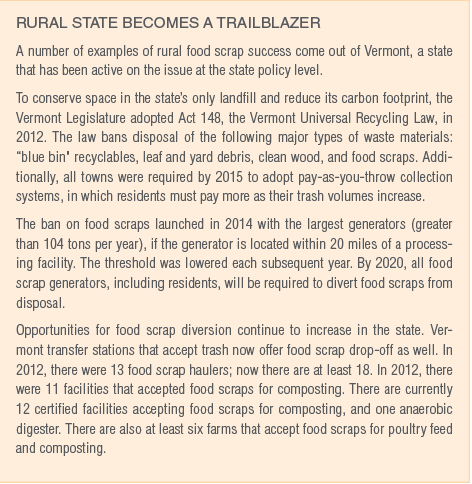 At both complexes, food scraps are composted in a tumbler. After three to four weeks, materials are moved to a three-bin system lined with one-quarter-inch hardware cloth. This approach, used at other community compost sites in Vermont, makes food scrap composting more palatable to those with concerns about vector control and odors. While both projects started with only a few volunteers, and were initially met with some resistance or caution, once the tumblers and three-bin systems were in place the majority of residents were excited to join the project.

The participation rate at Quarry Hill grew by so much in the initial weeks that plans are in the works to increase the size of the tumbler in order to accommodate the volume of food scraps being diverted. One of the challenges faced by both projects is the diversity of households at each complex, as well as the number of participants.

The organizers agree they need to improve signage to better control the compost recipe – some residents have been adding too many “browns” (along with food scraps), and others forget this step all together. As the original compost “champions” refine their composting systems, signage and communication, they are excited to see so many of their neighbors embracing the project.

The state of Maine is well known for hosting the Maine Compost School, the longest running compost training school in the country. The state tends to shun regulatory mandates, but through grants, training and technical assistance, the state has demonstrated a longstanding commitment to organics diversion and value-added compost products.

King provided technical assistance to Skowhegan (population 8,302) when the town started adding food scraps to its yard trimmings compost operation in 2014. The program continues to expand, with about 50 households and a regional charter school participating.

Residents who sign up for the free program receive instructions and a bucket for storing food scraps. Food scraps are emptied into a two-cubic yard dumpster outfitted with an aeration system, covered daily with sawdust from a local sawmill, and composted for up to two months. The Maine Compost School trained facility employees to use a front loader to build and manage windrows of composted food waste, yard trimmings and manure. 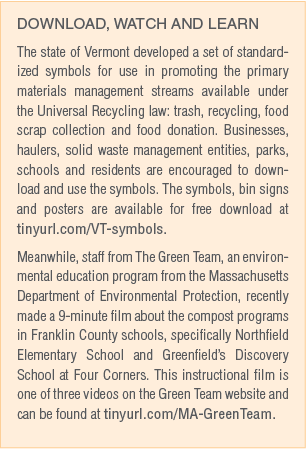 Skowhegan officials, recognizing the facility’s benefits, fully support the operation. The facility processes food scraps and organics for less than the $66 per ton landfill tipping fee, amounting to about $15,000 per year in savings for the town. The operation produces more than 1,200 yards of finished screened compost. This year the volume has grown enough to allow the town to sell between 500 and 600 cubic yards of compost to contractors.

In addition, about 300 yards of compost are mixed with loam, and the resulting material is used by the town highway department for summer roadside projects. And residents can pick up finished product for their gardens at no cost.

A rural county paves the way in Massachusetts

The Franklin County Solid Waste Management District (FCSWMD) in Massachusetts consists of 21 member towns in the less-populated western part of the state. The towns’ population numbers range from 378 to 8,455. Support for the district comes from assessments of member towns, a fee-for-service program and grant income.

Amy Donovan, program director of FCSWMD, starts each school off with a food waste composting presentation. She also provides technical assistance in implementing food scrap collection in each school cafeteria, as well as troubleshooting as needed.

Three of the 25 schools compost food scraps on-site. The remaining 22 schools have their food scraps, along with soiled paper, hauled to a commercial compost facility. Many of the schools have reduced cafeteria and kitchen waste by as much as 80 percent.

Over the past 11 years, FCSWMD has also set up 30 worm compost bins in classrooms across the county to give students a hands-on experience in vermicomposting.

Eight Franklin County transfer stations accept food scraps and soiled paper from residents at no cost. The district also lends its special event signage and recycling and compost bins to over 40 special events each year.

Franklin County is fortunate in that it has one commercial compost operation (which also provides hauling) and two farm-based operations. Triple T Trucking out of Brattleboro provides the bulk of the hauling services for the county.

Across the country, rural and small communities are taking on food scrap diversion in unique ways, building partnerships and engaging material generators.

The programs explored in this article show that food scrap diversion in small communities can be cost-effective, efficient and beneficial to those jurisdictions in a multitude of ways.

Athena Lee Bradley is the projects manager for the Northeast Recycling Council (nerc.org) and can be contacted at [email protected]

Natasha Duarte is the director of the Composting Association of Vermont (compostingvermont.org) and can be contacted at [email protected]

For more on community composting in Vermont, please see “The Middle Ground,” a feature story in the January 2018 edition of Resource Recycling.