Out of the woods

The village of Milan, with a population of just over 3,000, sits at the base of Mount Taylor in northeast New Mexico. That’s the highest peak in the San Mateo Mountain range and one of four sacred mountains of the Navajo Nation.

The mountain is also the namesake to Mount Taylor Manufacturing (MTM), a family-run business that began as a wood molding plant in 1965. At its height of production, MTM had 96 employees working double shifts to create baseboards and casings for homes throughout the United States and Canada.

Matt Allen, the current owner and son of the founder, is a firm believer that manufacturing is the best way in this country to build wealth. This belief helped fuel the expansion of his family business into four separate entities all under the Mount Taylor name: a sawmill, an industrial machine shop, a wood pellet manufacturing division, and a grinding yard. Each of these different operations generates residual material that is managed by another part of the business, and, together, the company divisions are helping to divert significant tonnages of wood waste from disposal.

Allen noted he “probably runs one of the greenest companies in the state, partially by design and partially by happenstance. The only thing that really goes to the landfill at our operation is office trash.”

Recycling stakeholders across the U.S. are looking for businesses like MTM to pop up more frequently. The company is economically viable and plays a role as an end market for locally generated material. Its success is certainly a factor of Allen’s strong leadership and vision. But a number of government bodies and outside groups have also played a role.

In this case, the end result is wood diversion in one corner of New Mexico. However, the takeaways from the MTM story can be applied to recycling market development efforts related to a variety of different materials and jurisdictions.

Significant portion of the waste stream

In New Mexico, it’s long been understood that solutions are needed for discarded wood.

The New Mexico Environment Department: Solid Waste Bureau’s (NMED:SWB) Solid Waste Management Plan from 2015 identifies increased diversion of organics and development of local markets for recyclable materials as key diversion objectives. While the amount of wood waste landfilled in the state each year is unknown, NMED: SWB reports that 63,848 tons of brush/yard trimmings and wood were composted or mulched in 2014 (the most recent year for which data is available). And assuming New Mexico follows the national waste characterizations as outlined by the U.S. EPA, out of its 1,896,159 total tons of MSW in 2014, 305,903 tons of wood and yard trimmings went to landfills.

Most solid waste facilities in New Mexico accept yard and brush waste through drop-off programs that often include incentives to divert the material, such as reduced tipping fees. However, many of these programs do not accept manufactured wood waste, such as construction debris and pallets, as part of their wood diversion programs.

It’s here that MTM can play an important role. The company prefers this dry, clean manufactured wood as feedstock for its wood pellet manufacturing operation. And company representatives have in the past cold-called potential generators of this kind of material.

But though MTM is now a clear cog in New Mexico’s wood diversion infrastructure, the road to that point has had a few twists.

From its inception, the company’s sawmill work generated a large amount of sawdust that had to be managed. Allen explained that the sawdust was originally going to a local press board company, but when that company went under in 1999, he went on the hunt for new markets. After he received a payment for half of what he had expected for his sawdust from a wood pellet manufacturing plant in Arizona, he decided to open his own pellet mill to manage the byproduct himself. 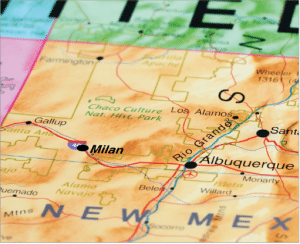 During the housing boom of the early 21st century, Allen became uneasy knowing that the housing bubble would burst and take his molding manufacturing operations with it. With this in mind, he sought to diversify to continue to be able to create feedstock for his wood pellet plant. In 2007 Allen purchased a rough, 5-acre parcel across from the Southside Wastewater Reclamation Plant near Albuquerque, which is about 80 miles east of Milan. The land was essentially an illegal dumpsite. Allen demolished buildings, cleaned up waste, fenced the perimeter and put in a wood grinding operation, which he named Wood You Recycle. This business accepts dry wood waste from customers, as well as from the MTM sawmill operations, and makes garden mulch, animal bedding and playground wood chips.

Sawdust from the sawmill and Wood You Recycle grinding yard feeds the wood pellet manufacturing facility, the machine shop serves as an in-house means to repair items and keep equipment working smoothly, and the grinding yard diverts clean wood waste from the landfill.

Today the company receives dry wood waste from approximately 15 businesses, ranging from educational institutions to private manufacturers. The operation helps customers save money on solid waste disposal fees – MTM charges a fraction of what it would cost to landfill the material, and in some instances the company accepts the material at no charge.

MTM has a total of 46 employees across the Milan and Albuquerque sites and provides ancillary trucking jobs associated with its operations. Allen estimates they grind between 10 million to 12 million pounds per year to create wood pellets and garden mulch. MTM’s internal operations provide about 75 percent of this material, with the other 25 percent coming from customers at the Albuquerque grinding yard.

As Allen predicted it might, MTM’s wood molding production ceased in 2010. However, the company’s sawmill is still in operation, thanks in part to two unlikely partners: the U.S. Forest Service, which is part of the Department of Agriculture (USDA), and the National Wild Turkey Federation (NWTF).

The USDA’s Collaborative Forest Landscape Restoration Program (CFLRP) and Collaborative Forest Restoration Project (CFRP) provide grant funding to encourage collaborative ecosystem restoration of priority forest landscapes. The CFRP is specific to New Mexico, and the CFLRP is a competitive, nationwide grant program. Under the CFLRP, the Cibola National Forest in central New Mexico has a stewardship agreement with the NWTF, which serves as a financial vehicle to manage wildlife habitat.

MTM has a contract directly with the NWTF to handle the processing of small-diameter trees that are harvested through the project. MTM pays for freight to bring those harvested logs to the sawmill, and the company received CFRP grant funding to help purchase some of the equipment needed to transform their molding operations into a sawmill that specializes in processing small-diameter timber.

The stakeholders say removing trees in a responsible manner is beneficial for the environment. At the time of this writing, the mountains around Milan were on fire. The winds blew the flames into areas that hadn’t been harvested, causing the fire to spread and become more difficult to manage.

The U.S. Forest Service funding aims to restore the natural ecosystem and to mitigate the likelihood of extreme wildfires, but without an end market for the harvested material, the wood slash is often burned or stockpiled on site. MTM provides a solution to this, with the sawmill cutting the trees into rough grain lumber that is used primarily for wood pallets and fencing material. Any byproducts are used for either pellet manufacturing or ground into playground wood chips.

The Cibola National Forest program is one of 23 nationally recognized projects in the country. Ian Fox is the Cibola National Forest and National Grasslands Resource Staff officer overseeing the CFLRP partnership with MTM and the NWTF. “Without the end market provided by MTM, we would not be able to restore acres of forest at the current scale and pace,” Fox said. “For our project, it’s imperative to remove the material from the site and not create additional fuel that increases fire dangers.”

Fox’s economic analysis over the past few years notes that this project supports 70 direct and indirect jobs in one of the most economically depressed counties in the country.

Scott Lerich is the district biologist for the NWTF across Arizona and New Mexico. Lerich has seen the positive benefits within the Cibola National Forest with an increase in the native grasslands and the associated increase in wildlife species, including more wild turkeys in the area. “This project is a true collaboration amongst disparate partners all working towards the same goal: restoring the natural ecosystem in a sustainable manner while bringing good jobs to the region,” Lerich noted.

In 2017, MTM began investing over $1 million to expand operations at the Wood You Recycle grinding yard in Albuquerque. During this process, the company gained another partner and received $100,000 from the New Mexico Economic Development Department’s Local Economic Development Act (LEDA). The LEDA program provides public support for economic development efforts and is used to push ahead public-private partnerships.

The expansion will create five new manufacturing jobs and allow MTM to construct a new fence to help mitigate dust. It will also enable the company to install a fire suppression system and purchase a new pellet mill that will be identical to the pellet mill operating at the Milan location. The updated facility means MTM should increase its volume of garden and animal bedding products as well as boost wood pellet production.

The development will also allow the company to launch new products, such as a compressed, clean, long-burning firewood, which will carry “New Mexico True” certification (a designation from the New Mexico Tourism Department that signals a product is 100 percent made in the state). The company can use that fact to take advantage of state merchandising opportunities.

Allen has set up his operations to ensure that the pellet mill can operate independently from the sawmill if needed. This is simply because the sawmill is dependent on federal funding to harvest the small-diameter trees. Earlier this year it appeared Congress would not appropriate funds for the CFLRP grants. However, pushback from stakeholders, including Allen, helped to ensure appropriation.

It’s true that the wood pellet mill operates more efficiently when sawdust from the sawmill is available, but the recent expansions of Wood You Recycle’s wood collection and grinding operations guarantees that the company will have enough feedstock to continue to operate their two pellet mills even if the sawmill closes.

MTM’s expanded operations aren’t going to divert enough new material to significantly bump up New Mexico’s current 16 percent recycling rate for all materials. However, the company is providing a niche domestic market that doesn’t depend on China’s appetite for foreign scrap.

Like any manufacturing business, it is still affected by supply and demand, but the market highs and lows of the wood pellet industry are more dependent on local factors, such as whether or not a cold winter is in the forecast.

At a time when many recyclers in the country are feeling the stress of global markets, there is some comfort in knowing that healthy local markets are expanding and needing more scrap material to fuel that expansion.

Sarah Pierpont is executive director of the New Mexico Recycling Coalition and can be reached at [email protected].