By now, anyone involved in electronics recycling knows the CRT story all too well. As technology for computer monitors and TVs transformed over the last two decades, the older lead-laden cathode ray tubes (CRTs) that entered the waste stream had limited appeal for end users and could no longer be easily moved through the market in a profitable way.

Startups have tried to leverage technology to create more end outlets, state programs have shifted their payment structures to try to cover processing costs, and e-scrap firms have retooled their business plans to avoid handling the material. But still the CRT problem looms large, spurring lawsuits, bankruptcies and frustration for all types of groups and businesses.

Below is a look at four important CRT developments that have unfolded in recent months. They help highlight the way in which an old problem continues to spur new challenges for the sector.

Property owners spent millions of dollars cleaning up CRT storage sites left behind by shuttered East Coast processor Creative Recycling Systems. But E-Scrap News, sister publication to Resource Recycling, confirmed in February much of the glass went to companies that ultimately failed and abandoned stockpiles of their own.

The earliest cleanup was conducted in Maryland in December 2014 and the last cleanup was completed in September 2016 in South Carolina.
State records indicate most of the material was sent to a handful of downstream processors: Ohio-based Closed Loop Refining and Recovery, Kentucky-based Global Environmental Services (GES) and Illinois-based Kuusakoski Recycling.

Closed Loop and GES received more than half of Creative’s stockpile and have since closed, leaving behind millions of pounds of their own CRT glass.

Both firms have been the subject of lawsuits and regulatory action. Kuusakoski continues to operate its CRT operation.

By December 2014, 7.8 million pounds of material had been removed from Creative’s former Elkridge, Md. processing site and sent to GES in Kentucky, said Jay Apperson, a spokesman for the Maryland Department of Environment.

While the GES Georgetown, Ky. site has been largely cleaned out, a facility in Cynthiana, Ky. has an estimated 1.8 million pounds of CRT material in gaylords, Maybrier said. A third site, in Winchester, Ky., also contains some unprocessed material, including whole CRT units. “We haven’t really gone in there and given a total assessment,” Maybrier said.

Closed Loop closed in 2016 and left behind more than 200 million pounds of CRT glass in Arizona and Ohio. The company has faced legal issues as a result of its abandonment of material. It lost an $18 million lawsuit in Ohio and has been sued by an insurance company in Arizona, court records show.

Most of the rest of the material from Creative’s locations made its way to Kuusakoski. That firm received 8.3 million pounds from two Creative sites in Florida and another in Illinois, officials from those two states confirmed.

Finally, officials in South Carolina confirmed that 6.7 million pounds of material had been removed from Creative’s former site in Blythewood, S.C.

The state said it was not aware of where the property owner sent the material downstream.

India-based electronics manufacturer Videocon has long served as a major outlet for recovered CRT glass. But in late January the company confirmed with E-Scrap News it is taking in only “limited” tonnages through its closest North American partner, and former suppliers contend that Videocon has ceased production of new CRT devices altogether.

Videocon has typically received much of its material from the U.S. through a company called Technologies Displays Mexicana (TDM), which has worked alongside partners Cali Resources and Glassico.

Separating and cleaning the material at its plant in Mexicali, Mexico, TDM has shipped hundreds of millions of pounds of glass directly to Videocon, which has processed the material at a site in Bharuch, India to manufacture new CRTs. Videocon representatives have said that CRTs continued to see modest demand in India and other developing markets.

Bessa also would not elaborate on the specifics of the company’s CRT demand or its handling of material. Industry members who have worked with Videocon in the past, however, say the company is reducing its consumption because its glass-to-glass operation is no longer running. 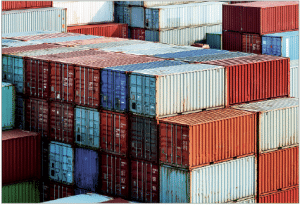 Significant tonnages of North American CRT glass have for years been sent overseas for end use by India-based Videocon. But the company now says its demand is “limited.”

“They were no longer turning the glass into a new CRT and they didn’t need the volume they previously needed,” Gloyd said.

He noted Videocon is now “working on a new project … so they can use the CRT glass.” He declined to provide additional details on the initiative or current glass capacity of Videocon.

ERI, one of the largest e-scrap processors in the U.S., has also stopped supplying Videocon. Aaron Blum, ERI’s chief operating officer and chief compliance officer, said his company hasn’t sent material to the Indian firm for almost two years due to a lack of demand.

Videocon has been the subject of uncertainty for some time. In October 2015, E-Scrap News reported on Videocon shutting down its CRT processing furnaces due to a variety of maintenance issues. After reopening for a brief period of time in 2016, the operation faced another shutdown in August 2016.

In January, state officials in Iowa announced they were filing suit against an electronics recycling operation accused of stockpiling and improperly managing millions of pounds of CRTs.

In at least one unpermitted storage site, Recycletronics delivered boxes of glass that were later dumped out and burned, the lawsuit alleges. Any metal content was removed and the remnants were dumped on the ground. The U.S. EPA, which has been monitoring the company’s sites in recent years, estimates that nearly 1.2 million pounds of leaded glass materials are mixed in with the soil at that unpermitted location.

At another site, nearly 3.4 million pounds of crushed leaded glass were stored on a concrete pad, and nearby soil and water tests showed the presence of lead.

Recycletronics, which closed its doors in mid-2017, used Closed Loop Refining and Recovery and Technologies Displays Americas as its downstream outlets, according to the U.S. EPA. Closed Loop collapsed in 2016 after amassing the largest known U.S. CRT stockpile in history.

Nulife closing down and giving up on U.S. business

Last September E-Scrap News learned Nulife Glass, a company that built its own furnace to recycle CRT glass in the U.S., was shuttering.

The firm, led by Simon Greer, struggled to clear regulatory hurdles related to its accumulation of CRT material in New York, Pennsylvania and Virginia. Greer told E-Scrap News the company, which was founded in England, was nearing completion of a multi-million-dollar cleanup effort in Pennsylvania and would be focusing on cleaning out its Bristol, Va. and Dunkirk, N.Y. sites.

Despite regulatory issues dating back to its founding, Nulife emerged as a significant downstream outlet for U.S. CRT glass. It maintained several warehouses in Pennsylvania.

According to Greer, the undoing of the company ultimately came in March, when the Pennsylvania Department of Environmental Protection ordered the company to remove more than 17 million pounds of glass in storage by February 2018.

Nulife suspended its operations in June 2017. Greer said Nulife was attempting to safely manage its remaining material as it winds down its business.

“We’re not running away. We’ve hit a crash point and we’re doing the best we can,” Greer said. “People have buried stuff in the ground, people have run away – our business has failed, but we’re trying to make sure the places where we’ve operated are not affected.”