Q&A: Rolling with the markets

By now, most recycling professionals are well-aware that major market shifts have been occurring for many materials collected curbside.

But market evolution has also occurred in recent years for tires, a material type that might not show up in municipal programs but can still have a major effect on local sustainability efforts.

To get an understanding of where collected material is moving and how new end uses are opening opportunities for tire processors, Resource Recycling spoke with Brad Swenson, an industry expert who is president and founder of tire recycling equipment provider Eco Green Equipment.

Resource Recycling: In today’s market, where are most scrap tires heading?

Brad Swenson: The big volume mover in the industry is tire derived fuel. In TDF, we’ve got a lot of different forms. Some places can buy whole tires, but not many can do that. The major users are cement kilns, pulp and paper mills and some waste-to-energy plants. The majority of them are taking a shredded chip and mixing them in with coal or oil. It’s just fuel for their boilers.

But that market is going through some interesting changes. In the past, typically a 2-inch to 4-inch size of TDF is what most people were using. But what we’re seeing is that these plants have been starting to want it to be down to a 1-inch chip, and they want it to be 95 to 98 percent free of steel. In those cases, they’re able burn a lot higher percentage with their coal, which is an advantage to them because the BTU value of TDF is on average 30 percent greater than the BTU value of coal. 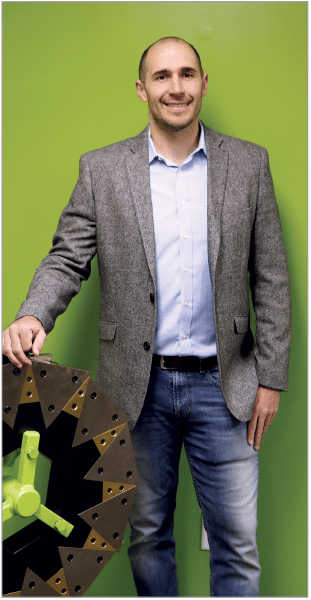 We have a customer down in Costa Rica that sells TDF to a cement kiln. When they first started, they did all 2- to 3-inch nominal chips, and they could burn 10 tons of rubber a day mixed with their coal. They switched that down to a 1-inch, mostly wire-free product. They increased to 90 tons per day of rubber. That’s an evolution in the market we’ve started seeing in the last two years. The plants have to make some modifications so they can feed it correctly, but that’s helping to consume a lot more tires.

Are there other emerging end markets developing for recovered tire material?

The real future we’re seeing in tire recycling is thermoplastics, where you mix in a percentage of rubber with your plastic.

This acts as a filler to reduce the costs of the plastics. At the same time, it gives the product valuable traits such as better elasticity, and it’s less brittle so strength goes up. It doesn’t work in every plastic, but it’s still a big market. For instance, on the new Ford F-350 trucks, all the mud flaps are thermoplastics with a percentage of rubber.

What is the relative breakdown of plastic to rubber in a product like that?

It depends on the product you’re making. There are applications where they’ll go up to 70 percent rubber and 30 percent plastic. Those are new markets. Over the next 10 years, that’s where the explosive growth is going to be.

And so what does all that mean for processing? What is required to open up those markets?

To be able to do these thermoplastics, you’ve got to be able to shred the tire down and remove the steel, remove the fibers and then grind it down to a powder finer than 20 mesh. Typically the target range is 30 to 40 mesh, but it can go as high as 80 mesh.

You said the material needs to be ground down very finely. Can you compare the fineness to something a layman might be familiar with?

It’s like a really fine sand. Not quite a flour but a fine sand.

In talking about thermoplastic, what do the economics look like?

The injection molders that are doing the thermoplastics would buy the processed rubber as a raw material. They’ll buy that anywhere from 20 to 30 cents a pound depending on the application. For them it’s a total win because they’re reducing some of the materials they use that are costing them 50 cents, 60 cents, sometimes a dollar a pound for similar attributes.

Are significant tonnages of recovered tire material moving into that market?

This is new. It’s over the next five years something that will grow to significant volumes. Today it’s a smaller volume in the industry.

What other market possibilities are emerging?

We have clients producing blocks for mounting solar panels on roofs. The product doesn’t deteriorate, it helps with vibration and it’s affordable. The same idea can be used for mounts for heating and air conditioning units on roofs. A lot of these things are just little pieces that support other industries.

Another big one you’re seeing is sound insulation and underlayment in multi-story buildings. No one likes to hear an upstairs neighbor having a party. Companies are making underlayment that goes under your wood floor or tile, and it serves as a real good sound barrier. The benefit in addition to that sound barrier is it’s one of the highest LEED credits you can get. It’s 100 percent recycled material, which is a big deal for big contractors nowadays.

The issue of stockpiling really helped promote tire recycling in the U.S. in recent decades. Where does that issue stand, both in this country and around the world?

Here in the U.S. market, tire recycling programs are in place, and there are processors in just about every state. Stockpiles have been reduced substantially. For our company, for instance, in the U.S. we are selling more downstream grinding equipment to take material down to a smaller size than TDF.

But in developing markets, we’re seeing more of an environmental focus. The Zika virus created a lot of momentum in getting rid of tire piles because they are a health disaster. In some places, though, there is no system in place for collecting tires. So recycling interests have got to go in and figure out how they can get the tire collection system in place so they have tires to process. They also have to figure out how to get government on board and to get people to understand you’ve got to pay to get rid of this material just like any other garbage.

The biggest way municipalities can help the tire recycling sector is supporting and providing grants to groups that want to create new products with recycled rubber.

Moving the focus back to the U.S., what challenges do you see in continuing to develop the tire recycling market?

There’s not a lot of material oversight in tire recycling as far as giving your crumb a certain grade or it meeting a certain standard or spec. Groups have come in and tried to do that, but they’ve all been outside groups. They’ll print a spec, but it doesn’t seem to meet what is actually needed or it’s impossible to meet. For example, the International Play Equipment Manufacturers Association (IPEMA) came in for playground mulch and they put in a spec that said you couldn’t have any steel in the material even if it is encapsulated. That’s virtually impossible to do unless you reduce it to a smaller size. ASTM and IPEMA are working to develop better specs, but this will take some time.

Do you think some level of spec development is needed?

Yeah, I think it would be really helpful, but it has a lot of challenges. It’s not like it’s material that gets used for a few different things. Just in thermoplastics you’ll have one person that says it has to be this size and it can’t be processed above this temperature. Then you’ll have someone else who says it needs to be a little smaller, and it’s actually OK if it’s processed above that temperature. So you just have so many variables.

How can municipalities approach tire recycling to help move the sector forward?

The biggest way is supporting and providing grants to groups and companies that want to create new products with recycled rubber. There are a lot of processors out there, and though some areas could still use more processors, at this point the majority of tires are being handled by a processor in the U.S. Where the challenges are is there is not enough promotion and support to develop downstream markets. There are processors being forced to shred material and throw it in a landfill, wasting a valuable resource.

Cities and municipalities can be supporting groups that manufacture safety and traffic products that are then used by the city. There are a lot of products – for instance, rubber-modified asphalt or safety and traffic products that go through thermo- or compression molding – that go back to benefit municipalities. So there are lot of ways where local government could promote market development and it where they would actually get the benefit.