How China fallout is shaking recycling in California 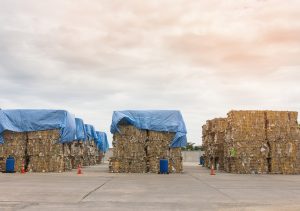 About 85 percent of mixed paper and OCC exported out of California has been bound for China in recent years, and as the Asian behemoth closes its doors to some of those imports, the state’s recycling industry is feeling the hit.

In 2016, California’s exports of recyclables amounted to 15 million tons, worth an estimated $4.6 billion. Some 62 percent of that exported material went to China in 2016, according to a presentation from a state recycling official at a meeting held Jan. 23.

China’s import policies were a major part of the discussion at the January monthly public meeting held by California’s Department of Resources Recycling and Recovery (CalRecycle).

Along with CalRecycle staffers outlining the potential impact of China’s recent restrictions on the state in terms of export tonnages, the roughly hour-long China discussion featured perspectives from a range of California stakeholders who discussed opportunities in local market development, changes needed in recycling funding, and the significant turmoil already being felt on the ground by California materials recovery entities.

“It’s a day-to-day battle of moving this material,” said Dave Vaccarezza, owner of private hauler and materials recovery facility (MRF) operator Cal-Waste Recovery Systems  “We can only warehouse it so long and then it has to go to landfill. We have no other options and we’re that far away from it.”

In 2016, China received roughly 9 million tons of recovered fiber and 500,000 tons of low-grade plastics from California, according to CalRecycle. Overall, nearly two-thirds of recyclables exported out of California have been bound for China in recent years.

Mixed paper, which CalRecycle defines to include OCC, made up a majority of the recovered fiber exported to China, at roughly 7 million tons. China has been California’s largest mixed paper customer.

But the volume dropped off noticeably as China pushed toward its import restrictions in 2017. California exports of mixed paper to China decreased by about 1 million tons. A large portion of the drop was in OCC, which had 500,000 fewer tons shipped from California into China over the course of the year. Unsorted paper and bleached chemical pulp also saw decreases.

Plastics, which in 2016 made up about 6 percent of all exports of recyclables, had less of a hit. According to CalRecycle, with the exception of PVC loads, exports of mixed and low-grade plastics decreased only slightly in 2017.

“We have heard particular concerns about the impacts of plastics 3-7 and whether they will continue to have viable markets,” said Larry Stephens, environmental scientist at CalRecycle.

Representatives from the department noted that in response to the market turbulence, they are putting a focus on strengthening a number of facets of California’s recycling system, referencing CalRecycle’s ongoing packaging policy development process as one example.

CalRecycle also estimates up to $3 billion in investment is necessary for new infrastructure to support the state achieving its recycling goals, said Evan Johnson of CalRecycle’s policy office.

Opportunity is a recurring theme in discussions about the China ban and its U.S. implications. For some in the industry, that means giving more attention to new technologies. Chuck White, an advisor focusing on consumer products and environmental issues for Manatt, Phelps & Phillips, described the “huge demand” in California for low-carbon fuels, which he said presents an opportunity to make use of recyclables.

“These papers and plastics are a tremendously valuable feedstock for producing these low-carbon fuel standards,” he said. But he added that the gasification and pyrolysis technologies required to convert the materials to fuel are discouraged by the state government. They are not considered a form of recycling but rather of disposal, he said.

If the barriers to these technologies were lifted and they were encouraged, he noted, it could “provide a market for these materials for which one really does not now exist.”

However, Nick Lapis of environmental group Californians Against Waste offered an opposing view of the notion of using recovered materials to generate fuel.

“We’re in an interesting situation right now where a lot of the recycling we were previously doing we can no longer do,” Lapis said. “That does not mean that we need to now start calling destruction of resources recycling. We don’t need to cook the books in order to artificially hit numbers.”

Instead, he said, the focus should be on market development and on building domestic remanufacturing capacity.

A handful of MRF operators and industry stakeholders recounted their experiences with the Chinese fallout so far.

“In order to meet the diversion requirements here and the quality standards overseas, the curbside processors have to invest more capital and more labor right now, and they’re going to get less revenue even after they do that,” said William Winchester, chief operating officer for Los Angeles-based Berg Mill Supply. “That is a very bitter pill to swallow.”

Winchester said the recycling industry needs to reframe the way it views itself. Rather than talking about materials diversion out of the waste stream, he said the industry should be considered the “first step in the supply chain for a manufacturing environment.”

“We haven’t looked at ourselves that way, but that’s how China wants us to be,” he said, citing the recently finalized 0.5 percent contamination threshold for imports of materials not named in the ban. “That’s what they want us to be, a provider of very clean, raw materials.”

Winchester said that needs to translate into education and outreach to clean up the curbside stream. But he said it also means residential customers need to pay increased fees in acknowledgement of the new environment.

“The money is not going to come from the sale of the commodities,” he said.

Vaccarezza of Cal-Waste Recovery Systems offered a stark picture of the impact his operation has felt. His company processes about 200 tons per day of material from 125,000 households, he said.

“I can tell you that, on a day-to-day basis, this is dramatically impacting our company in terms of our ability to market the product, get paid for processing the material, and moving the waste stream onto a user,” he said.

He urged CalRecycle to offer support to the recycling industry by helping to educate the public. That step won’t return material prices to where they were before, he said, but it would be a start. Currently, the cost of processing recovered material “is skyrocketing,” he said, and it’s a struggle to find an outlet.

Vaccarezza added that to meet the new standards set by China, he’ll have to spend $6.5 million to upgrade a Cal-Waste facility he spent $11.5 million on five years ago.

CalRecycle Director Scott Smithline said the department is very committed to assisting the industry as the disruption unfolds. But he noted there are other considerations when it comes to the state agency’s role in this situation.

“The local diversion programs are an item of local control, and historically have been held tightly by the local governments as such,” Smithline said. That means the department will be communicating information all throughout the recycling chain. But he noted the CalRecycle has to “be careful to not overstep our bounds and start telling local governments what they can and can’t have their consumers putting in their recycling bins.”