Power in the people

Around the country, more local programs are adding organics collection to their service offerings. This is an admirable endeavor – as has been well-documented, food scraps and other organic materials very often make up the largest segment of the MSW stream being sent to landfill and incineration in cities and counties of all sizes.

But for a community to actually reach its organics capture potential, securing receptacles and ironing out hauling contracts is only part of the battle.

Resident outreach is also a crucial part of the process, and this area can be challenging. How do you build effective communication to households that may be resistant to a new process and wary of the “ick” factor?

The story behind New York City’s effort to roll out curbside organics over the last two years shows that a key to successful organics outreach is instilling energy and enthusiasm into the wider community. New York was able to develop a strong network of master composters among its resident population to sow the seeds of organics education. Then, when the program was implemented, dedicated teams of city staffers worked to get the city’s diverse population into the action.

Masters amid the masses

Though New York’s recent efforts to move into organics collection have grabbed headlines, the city actually began a composting program back in 1990, around the same time as the start of its municipal recycling initiative. Unfortunately, the city experienced high volumes of contamination in the collected compost stream, and complaints from the public skyrocketed. Anxieties about rodents, odors and all the other classic organics issues eventually led New York to cut the program.

However, there was still funding for organics initiatives, and New York used those dollars to start a master composter training program, which helped educate select residents to create community stewards who could then spread the word to the wider public. The idea at the time was that when organics collection relaunched, New York would be as prepared as possible to combat all the issues seen the first time around. 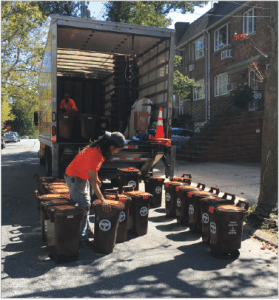 New York City began an organics collection pilot program in 2013. And since 2015, the city has been rolling out service to select neighborhoods across all five boroughs.

To date, the master composter program has certified hundreds of New Yorkers. Participants learn the basics about the science of composting, the process through which organic material decomposes to become an incredibly valuable resource that can be put back in nature. Individuals are also instructed on how to avoid common pest nuisances (“the big, the bad, and the furry”).

But most importantly, master composters develop the tools to approach organics diversion with the public. Knowledge basics in this realm can be different for everyone, and this fact is amplified in New York and its wide swath of cultural communities. To get their certificates, master composters must create a project geared toward creating a local composting opportunity. One example is a program participant who created a collection system at her place of work and then transported the material (via the subway, naturally) back home to a compost system constructed in the yard of her apartment building. The finished “black gold” was then distributed among friends and others in the community.

Once master composters achieve certification, the real work begins. These volunteers attend environmental events, collect food scraps at farmers markets and other venues, and give composting demos at schools, offices and other locales. For participants in the program, it soon becomes clear just how much small-scale composting exists around them.

Relaunch of the city program

After years of training master composters – and also researching waste impacts and costs – the New York Department of Sanitation Bureau of Recycling and Sustainability (BRS) decided to bring organics collection back into its service, with a pilot project starting in 2013 official and rollout in select neighborhoods in 2015. The effort was part of Mayor Bill de Blasio’s plan to send zero waste to landfills by 2030.

The bureau started small, with the pilot program focusing on a few neighborhoods made up of mainly single-family homes and duplexes. While targeting multi-family buildings would have a considerably larger impact on the waste stream, New York’s goal in getting the program off the ground was to prove its effectiveness in single-family and develop it from there.

One of the particular challenges in creating outreach around this initiative is the scale and diversity of the city. The five boroughs cover over 300 square miles and encompass more than 8.5 million people from a remarkable number of cultural backgrounds. In addition, city neighborhoods range from high-rise apartment buildings in Manhattan to large single-family homes on sprawling cul-de-sacs in Staten Island to 1970s public housing projects in the Bronx.

To take on this challenge, the city has enlisted an organics outreach team. The crew, much like the master composters, is made up of diverse, enthusiastic individuals that are on a mission to help educate the public about the organics program in each neighborhood. Unlike the master composters, however, the outreach individuals are paid and trained by BRS.

Once a neighborhood has been designated for organics collection, fliers go out in the mail notifying residents of their upcoming collection service. Around that time, the outreach team may start setting up information tables in public areas where residents can come to ask questions or express their excitement and grievances. Fliers are distributed in Arabic, Chinese, Hindi, Italian, Korean, Polish, Russian, Spanish and other languages.

Members of the organics outreach team typically speak a number of these languages to assist with communicating. 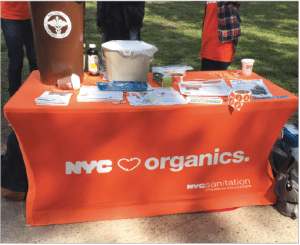 Once a neighborhood has been designated for compost collection, city outreach teams set up training tools at local events and in public spaces.

Once word has gotten out in the community, lidded collection bins are distributed. Teams use a highly organized and synchronized delivery process in which fleets of trucks containing hundreds of brown bins are delivered to each eligible unit in a rollout neighborhood. The organics outreach team is on hand with the bin delivery trucks to answer questions posed by residents. Emotions from residents range from extreme excitement (hugs are common) to anger (hurled bins have been reported). Often, the overarching sentiment is one of concern about getting charged for using the bin incorrectly.

The outreach team is prepared with reassuring answers to common questions, such as “When do I put this out?” and “Do I have to use this if I never eat at home?” Usually, after a brief exchange and perhaps a few extra coupons or other swag items, residents are content to take their bins with them to the recycling area of their homes.

After bin delivery in a neighborhood is complete, organics collection will start up within a couple weeks. The organics outreach team continues to maintain an on-site presence for a few more weeks to answer questions and handle concerns.

And these workers find ways to bring a little fun into the process. Around Halloween in 2016, the entire organics outreach team, plus some staff from BRS, dressed up in costumes and went around the Ridgewood area of Queens shoveling compost onto sad looking trees in commercial districts and handing out fliers to onlookers.

A composting werewolf? Now we really can say that New Yorkers have seen it all.

The goal of the New York program is to eventually bring organics collection to every neighborhood in all five boroughs. Clearly, hitting that mark is going to take some time, and the reality is that only a percentage of the bins will be used.

According to city statistics, New York’s diversion rate is 16.7 percent. Recent studies have shown that having organics collection will increase the rate of recycling in a neighborhood, so the two are mutually compatible – and the two service offerings can hopefully feed off one another to gain momentum. 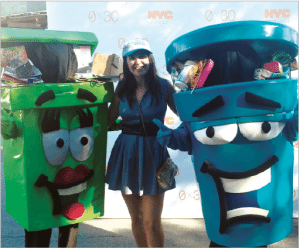 City staff make an effort to bring a dose of fun and enthusiasm to the organics education process.

But even if New York doesn’t hit all its goals, it’s imperative that program improvements continue. As the largest city in the United States and by far the largest creator of greenhouse gas emissions associated with waste, any push to handle materials better could have a significant impact. Also, the lessons from New York’s efforts can help inform other big cities around the globe.

Finally, it is this writer’s opinion that although significant strides are being taken, a stronger emphasis needs to soon be placed on working with multi-family buildings.

And this may take more than just a team of optimistic young people ready to work hard. To really make some progress within multi-family, a local law requiring buildings over a certain number of units to begin composting may be necessary. Similar local laws are in place at apartment and condo complexes to enforce energy policies. Why should waste be any different?

Celeste McMickle is founder of Celestial Solutions, a zero waste, compost, design and sustainability consulting company offering whole system solutions in the private and public sectors. She is a certified master composter with 10 years experience in the environmental and sustainability sector. She can be contacted at [email protected] and more information about her services can be found at www.celestial.solutions.