Taking it to the streets

In densely populated areas, there’s significant potential to help improve materials diversion by coordinating public-space recycling standards and communication with those elements already in place in the residential recycling sphere.

A recently wrapped up pilot project in Vancouver, British Columbia provides some hard data that can move this important conversation forward. The project was initiated by Recycle BC, the nonprofit stewardship group that works on behalf of companies mandated to fund and manage recycling of printed paper and packaging under British Columbia’s extended producer responsibility law.

The public-space initiative brought collection stations into a busy section of Vancouver, and it sought to leverage colors and other design elements that residents were already familiar with. Pilot project researchers then used waste composition audits and observation of behavior to determine in what ways the specially designed stations were leading to correct recycling action as well as identify where there remains room for improvement.

Details on the project

Recycle BC is responsible for residential packaging and printed paper recycling in British Columbia. Recycle BC services over 1.8 million households, more than 98 percent of the province, through curbside collection, multi-family collection or depot collection.

As part of Recycle BC’s commitment to improving residential recycling through a combination of increased access and awareness, the group designed the pilot project, in partnership with the City of Vancouver, to continue an ongoing investigation of the efficacy of on-street recycling bins for packaging and printed paper. Two other studies in this realm had already been completed by the group. This third study ran for nine months (from August 2016 to May 2017) and took place in a densely populated area of Vancouver to assess whether recycling behavior could feasibly be changed to divert waste away from landfill. 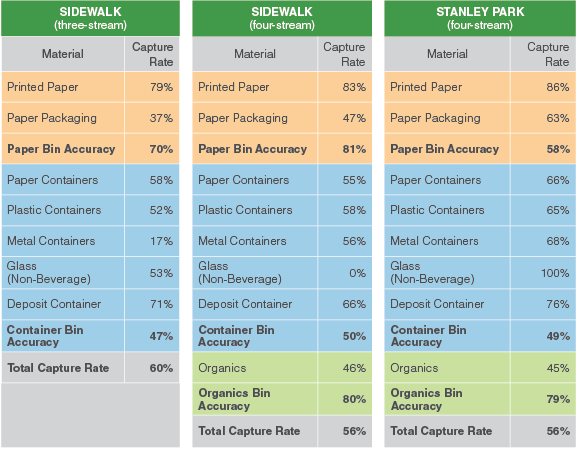 Recycle BC collects and processes a standard set of materials province-wide – every collector that’s part of the program uses the same list of acceptable recyclable materials. Such coordination allows for consistent messaging, and in this study, the public-space collection stations were built around that same “accepted materials” list. The project had the dual purpose of diverting public waste away from the garbage stream and facilitating better recycling behaviors in such a way that they may continue over time.

In August of 2016, a total of 31 recycling stations were installed in on-street venues in Vancouver’s West End, a lively and diverse area in the city’s downtown. The majority of the bins were installed on street sidewalks along a u-shaped corridor encompassing approximately 10 city blocks. Five of the stations were installed in Stanley Park, a popular public park.
Some of the stations had a three-bin design: a garbage bin for non-recyclable materials, a mixed paper bin, and a bin for recyclable containers such as containers covered under the province’s deposit system as well as coffee cups and plastic take-out containers. Other stations included a fourth bin, which targeted organic material. 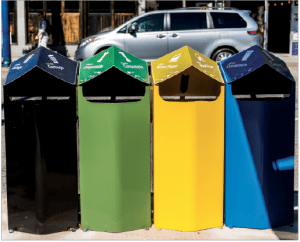 The bins featured bent and welded steel as well as powder-coated, anti-graffiti exteriors (see photo). This was based on a design created for a previous shorter pilot study and developed in partnership with the Emily Carr University of Art and Design and Metro Vancouver. Design modifications made for the 2016-2017 pilot effort included the addition of a bin liner and revised operational access to the bins at the rear. The bin colors aligned with the colors used in curbside and multi-family collection and icons were utilized to denote common materials included in each stream.

Though the study ended in May 2017, the bins will remain in use until the end of 2017. Material from the bins was collected daily throughout the pilot. Bins and processing services were provided by Recycle BC, and the City of Vancouver handled collection services.
Recycle BC created awareness for the initiative through a media launch, transit shelter ads and posters that local businesses could display in their establishments. The bins were also promoted through a Facebook campaign shortly after the project began, targeting residents in downtown Vancouver.

In order to accurately assess whether the bins had been successful in diverting waste and changing behaviors, three material audits and behavioral studies were conducted – one in September, one in January and one in May, each one lasting seven days.

The material audits looked at all the material collected during the given seven-day period. The behavioral study, meanwhile, had two components. Observational data was tabulated via monitoring one set of bins for two hours and another monitoring process that looked at three stations for an entire day. An interactive questionnaire was also distributed.

Through the study it became apparent that the recycling stations can affect recycling behaviors. However, a clear challenge is finding ways to reduce improper sortation of materials, as this was the most common mistake. It should be noted, however, that correct sortation did improve over time. 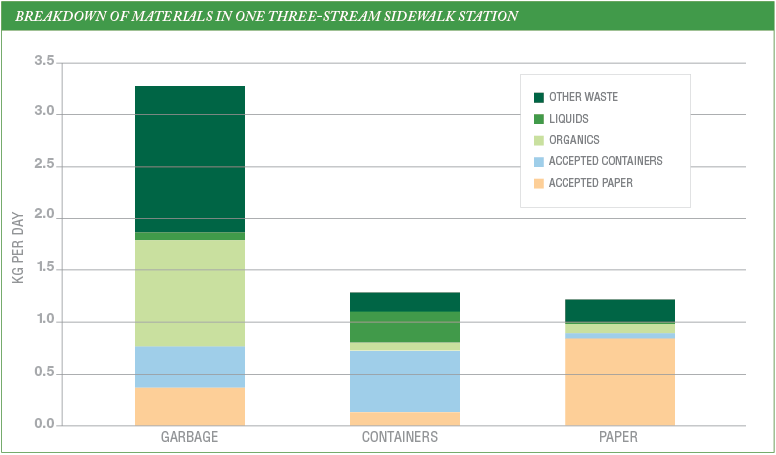 The study found printed paper and deposit containers were the two materials that were most often correctly sorted into the appropriate bin. Garbage bins received the highest tonnages, including many materials that could be placed into one of the recycling or organics bins.
Total material volumes for each recycling station averaged approximately 6 kilograms (around 13 pounds) per day in the sidewalk bins and approximately 3 kilograms (6.6 pounds) per day in the park bins. The total volume of material in the garbage bins was double or more what was placed in the recycling bins. The lowest material volume was in seen January, presumably due to there being less foot traffic in the colder months, with some variation between the actual streams themselves. 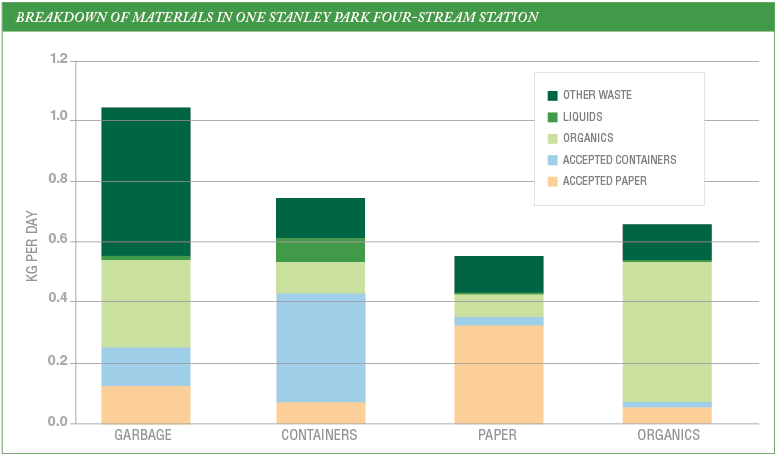 As the charts accompanying this article show, accurate sorting is a challenge with public space recycling bins. While improperly sorted material was generally lower than correctly sorted material, finding recyclable material in the garbage was a common problem. In addition, the amount of organics (including food waste) found in the garbage bins was quite high, even in areas where stations included a separate organics bin.

The behavioral study component of the pilot project also produced a number of important findings for judging the feasibility of modifying recycling action in the public-space realm.
Overall, awareness of the bins was high, with 95 percent of residents noting the style of the bin was familiar to them.

A number of factors influenced how residents selected which bin to put their material in, but the most frequently utilized element was the graphic icons – 39 percent said they used these visual clues to locate the correct recycling bin. In comparison, 32 percent of people said they used the colors of the bin to help them sort, and 29 percent said text descriptions assisted them. Interestingly, a very small minority said they determined where to put materials by observing what materials were already in the bin.

In summary, there is a significant opportunity to improve sorting accuracy across all streams, but the bins nevertheless performed well and the quality of recyclables generated from the streams was acceptable to the processor.

While a number of containers (and to a lesser extent, paper) are still being placed in the garbage stream, the amounts of these recyclables remaining in the garbage are similar to what is found in the single-family residential garbage stream of Metro Vancouver municipalities, according to other independent studies.

How to improve from here

The results from the audits and observation in the Vancouver study indicated sorting improved over time and sorting efficiency would benefit from ongoing promotion and education. Resident education should be a key element to increasing accurate sorting, in addition to the bin design. There were issues with the bin design from an operational perspective, and those should be addressed if future projects like this occur.

The pilot project recycling stations will be left in place until the end of 2017 to continue to give residents an opportunity to recycle packaging and printed paper materials while away from home. Researchers will also collect additional data in peak volume months.

Recycle BC will take the on-street recycling concept to consultation in November 2017 to gather additional feedback from other stakeholders. If further projects like this move forward, Recycle BC will use the pilot report findings to make any operational or promotional modifications to the bin design, collection method and educational programming.

Allen Langdon is managing director at Recycle BC and can be contacted at [email protected]. The full Vancouver public-space recycling pilot report will be available at RecycleBC.ca.