In recent years, Fort Worth officials have begun implementing policies to improve recycling performance in apartments and condo complexes, and these initiatives have included detailed surveying of the practices put in place at properties as well as analysis of how factors such as recycling convenience and rental costs may correlate with materials-diversion behavior on the part of residents.

This research helps highlight the specific areas of difficulty in the multi-family environment and shows how city officials can work with building managers and others to move multi-family forward.

In 1985, the City of Fort Worth formed the Citizen’s Solid Waste Advisory Committee, which marked the beginning of the municipality’s efforts to divert materials from landfill. In 2003, the city began a pay-as-you-throw residential program for single-family homes. In this system, residents were charged varying rates based on trash generation size, and the effort helped usher in weekly single-stream recycling collection in carts. 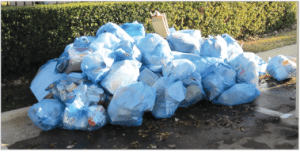 Some multi-family complexes in Fort Worth offer valet recycling service. Residents place their recoverable materials in clear plastic bags and those are then aggregated.

In 2014, Fort Worth started a formal multi-family recycling program by passing an ordinance requiring all multi-family complexes with eight or more units to offer some level of recycling to their tenants (or obtain a waiver). Per the approved ordinance, property owners or managers must submit a recycling plan to the city within 60 days of obtaining their certificate of occupancy.

Respectful of the fact that Fort Worth is an open market in the commercial realm – enterprises, including multi-family complexes, are free to contract with any hauler licensed through the city – the ordinance did not require a specific capacity or mandate accepted materials.

To learn how the policy was playing out, the city surveyed 40 properties in 2015 and again in 2017. Data was gathered by speaking to apartment staff over the phone or in person.

To ensure the study included a range of different types of properties, a stratified random sampling was used. Researchers leveraged information from the firm ALN Apartment Data Inc. to divide complexes into four classes (A, B, C and D), based on the rental price per square foot per month. Ten apartment complexes from each of the four price classes were surveyed.

A primary objective of the studies in 2015 and 2017 was to determine a multi-family recycling rate (defined as the weight of material recycled divided by the total weight of garbage and recycling material collected). Though the recycling rate was calculated by weight, it should be noted recycling weighs significantly less than garbage per cubic yard – according to studies from the U.S. Environmental Protection Agency, a typical recycling load weighs 139 pounds per cubic yard while garbage comes in at 225 pounds per square yard.

The tonnages of recycling and waste generated at each multi-family property were determined by first noting the number, size and type of recycling and waste containers used at each surveyed complex. Survey respondents (property managers or building owners) then told researchers the frequency of collection and fullness of the containers – fullness was estimated by respondents on a scale of 1 through 5. Some properties use a “valet” strategy of recycling collection in which residents place recyclables in transparent bags outside their units and the bags are collected and combined. The same scale of 1 through 5 was used to estimate quantity of recycling and waste for those properties.

Before Fort Worth implemented its multi-family ordinance in 2014, it held several training sessions for property managers.

The multi-family recycling rate for Fort Worth was calculated by averaging the individual recycling rates of all properties surveyed and extrapolating the data appropriately based on the number of apartment complexes in each price class in the city.

It is also important to note that the multi-family recycling rate only reflects properties that are currently recycling. Through submitting a waiver and having it approved by the city, multi-family complex managers can opt out of offering recycling to residents.

Once the city determined the level of recycling occurring at multi-family dwellings, staff began looking into the factors affecting behavior.
Active participation among residents is of course one of the most critical elements in this realm, and convenience underpins participation. The easier it is to recycle, the more likely people are to participate. In multi-family complexes, recycling can be made convenient through a valet bag program or ample distribution of receptacles. Conversely, recycling can be inconvenient to tenants if recycling locations are placed at a far end of a multi-family complex or if very few receptacles exist.

Building managers were asked to evaluate the inconvenience recycling poses on a scale of 1 to 5 (1 meaning no inconvenience at all and 5 signifying extreme inconvenience). Researchers then compared the “inconvenience” response for each property with its recycling rate. Not surprisingly, the properties with the highest recycling rates also had the most convenient access (see chart at right).

Likewise, educational efforts can inspire tenants to recycle. Education can take a variety of forms. The City of Fort Worth provides educational fliers in both English and Spanish that can be hung in common areas around a property to remind tenants of materials accepted for recycling. Also, many properties provide brochures to new tenants during move-in that explain the recycling program. Other properties have signs on recycling containers that remind tenants of what can be recycled as they put materials into the container.

Furthermore, a handful of properties reported having recycling champions, defined as staff members or residents who are in charge of promoting the recycling program. Other multi-family complexes opted to discuss their recycling programs at tenant meetings.

Fortunately, education seems to be increasing. In 2015, eight complexes surveyed offered no educational materials to tenants, but in 2017 that number shrunk to two.

To combat the contamination of recyclables, property managers have taken a variety of approaches. One manager, for instance, reported sending pictures of contaminated recycling containers to tenants. At a few complexes, staff resorted to manually removing contaminants from the recycling container.

Another complex reported using supplemental recycling bins to curb contamination. At that property, staff members lock up a large recycling container but place smaller recycling bins around the complex – if contamination occurs, it only affects the small bins. The method also prevents tenants from using the large receptacle as a garbage dumpster.

Similarly, valet bag programs mitigate the harmful effects of contamination. Since the valet recycling bags are transparent, contaminants can easily be identified at collection, and tenants can directly be notified of non-accepted items.

How indicative is affluence?

When the multi-family recycling ordinance was implemented in 2014, the city provided training sessions for managers. Some of these individuals expressed concern that successful recycling programs could only be accomplished at higher end apartments and that less expensive properties would not be successful.

City staff have attempted to find out whether such assumptions are true.

As part of the research in the wake of the ordinance implantation, the city investigated the relationship between successful multi-family recycling programs and rental price per square foot per month of apartment complexes. This was made possible by the initial effort to organize studied complexes in A, B, C and D classifications based on rental price per square foot.

As the chart below shows, there is a moderate correlation between price per square foot per month and recycling rate. 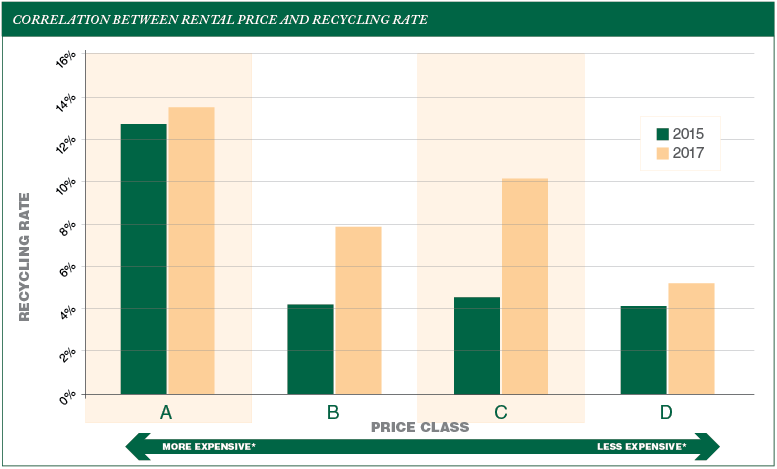 *As measured by rent price per square foot. Source: City of Fort Worth, 2017.

But researchers also found that some of the more successful recycling programs occurred at the least expensive, D-level properties. Additionally, the average recycling rates for the B- and C-level complexes surveyed in 2017 are significantly greater than the numbers seen in 2015.

Prior to the 2014 ordinance, properties with recycling programs were primarily A- category properties. By 2017, multi-family complexes of all price classes had the opportunity to grow and develop their programs. The significant increase in average recycling rates for B- and C-level properties demonstrates that recycling, regardless of price class, can develop over time.

Surprisingly, however, in 2015, only one complex reported reducing garbage frequency collections due to implementing recycling. And of the 40 complexes surveyed in 2017, not one reported a financial benefit from recycling. These properties have thus increased monthly net spending to recycle. 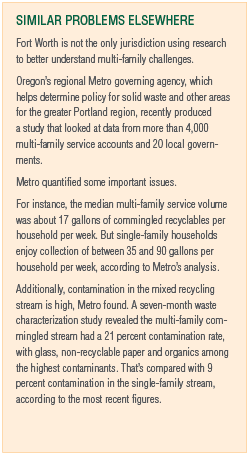 The work goes on

Moving forward, Fort Worth plans to continue taking steps to develop and improve multi-family recycling within the city. The municipality, for instance, is currently implementing a 2017-2037 Comprehensive Solid Waste Management Plan, which identifies several actions to ensure residents of multi-family dwellings have access to convenient recycling.

The city is also working to make obtaining waivers more difficult. Further, the ordinance may be modified to include housing complexes with three or more units instead of only those with eight or more units.

Finally, the city will be working with properties to ensure recycling plans developed by properties are properly implemented, helping with education and providing technical assistance. Building plans should also demonstrate that recycling containers are easy to access and adequate in size.

By working to give residents of multi-family complexes the same convenient access to recycling as single-family households and proper education, a higher recycling rate with fewer contamination issues can be achieved.

Lara Su Turan is currently a student at Columbia University. She worked as an intern at the City of Fort Worth Solid Waste Services Division during the summers of 2015, 2016 and 2017 to study multi-family recycling. She presented her research findings at the State of Texas Alliance for Recycling (STAR) Summit in San Antonio in October 2016.