Some of the most critical recovered commodities generated by materials recovery facilities have been fetching high prices lately, including aluminum and fibers. But China’s recently announced plans for import restrictions have introduced unsettling uncertainties into the market.

That was one takeaway from a markets-focused session at the 2017 Resource Recycling Conference in Minneapolis. Taking the stage to discuss recovered fiber, metals and plastics were DJ VanDeusen of WestRock, Joe Pickard of the Institute of Scrap Recycling Industries (ISRI) and Nina Bellucci Butler of More Recycling.

Those industry insiders made it clear that while the economy has been generally strong, the outlook varies strongly by material. And underlying the entire discussion is a concern about China’s plans. 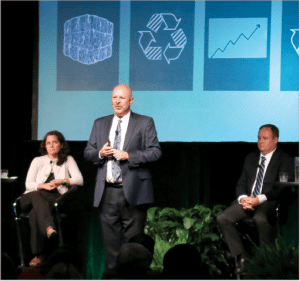 DJ VanDeusen of WestRock speaks on recovered fiber markets at the 2017 Resource Recycling Conference in Minneapolis. VanDeusen was joined by Nina Bellucci Butler of More Recycling and Joe Pickard of the Institute of Scrap Recycling Industries in the markets-focused session.

After laying the groundwork of economic indicators in general, Pickard explored pricing for ferrous and non-ferrous metals.

Aluminum, a key commodity for materials recovery facilities (MRFs), has increased 23 percent from the end of 2016. Prices for recovered aluminum now sit around $2,100 a ton. Copper has increased in value by 22 percent over that time, and it now sits at about $6,700 a ton, or over $3 a pound.
“These are multi-year highs for most of the base metals,” Pickard said.

Part of it has to do with expectations for improving demand from China for those materials not affected by the ban, and part is due to the weaker U.S. dollar, which makes prices for U.S. commodities more attractive compared with those purchased in other currencies. During the first seven months of this year, aluminum scrap exports from the U.S. were up 11.5 percent, compared with the same period in 2016. Exports to China, which receives the bulk of U.S. aluminum scrap shipments, were up 13 percent.

Ferrous markets have also had encouraging news in terms of pricing. In August, three grades of ferrous were up 30 percent compared with August 2016 levels. Boosting the prices are rising iron ore prices, high steel production in the U.S. and improved demand overseas for U.S.-generated ferrous scrap, Pickard noted.

That being said, the U.S. continues to import growing volumes of steel. For the first seven months of this year, U.S. imports of steel increased 22 percent year over year, he said.

VanDeusen, senior vice president of recycling at paper giant WestRock, noted his firm’s unique perspective on recycling markets: It’s a packaging producer that also runs 22 recycling facilities, manages a recycling brokerage business and provides collection service to thousands of accounts. WestRock handles about 8 million tons of recyclables a year. Five million tons are fed into the company’s own mills and the rest is sold.

It hasn’t been evenly distributed, however. While North America and Western Europe’s consumption of recovered fiber has been basically flat over that time, developing countries, particularly China, are using much more now than they did in the 1990s.

Dramatic shifts have occurred in the grade mix for North America. Total demand is essentially flat at 30 million metric tons per year, but the consumption of OCC has increased dramatically, mostly at the expense of the ONP grade, which isn’t as plentiful anymore because of the decline of traditional print newspapers.

“Mixed paper and the others grades have really become export commodities,” VanDeusen said. “It still gets consumed in the U.S., but the majority of that material that gets recovered in North America ends up offshore.” Specifically, estimates put the percentage of North America’s mixed paper that’s exported at two-thirds to three-quarters, he noted.

He cast doubt on China completely stemming the flow of fiber into the country. It needs the material, he said. Over the next two years, factories capable of producing 2 million metric tons of new containerboard are expected to come on-line in China, and while the country does a pretty good job of recovering its own fiber, “there’s no way for them to collect enough fiber to meet the demands of what’s happening with the paper mills,” he said. “Thirty million [metric] tons of fiber needs to find its way to China for those paper mills to continue to run.” 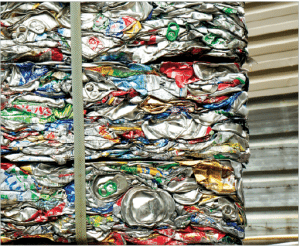 Prices for recovered aluminum increased over 20 percent during the first eight months of 2017.

PP is an emerging material that has seen growing recycling rates, Butler said, but she noted that for it, as with the other plastics, the key is separation to create a quality bale. The weak link isn’t in downstream processing capabilities.

“We have capacity to purchase HDPE, PET, PP and other resins,” Butler said. “We don’t have the capacity to take the material from the MRF, and further segregate it so we can get those discrete resins to market.”

China’s import policies aren’t the only factor affecting recycled plastics prices. The increasing supply and low price of virgin PE is also an important part of the conversation. The availability of low-cost shale gas led to a boom in the development in virgin PE production capacity, Butler noted.

Jared Paben is associate editor at Resource Recycling. He can be reached at [email protected].