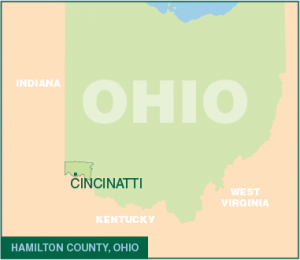 If it seems daunting to tackle contamination and hone recycling efforts in a single community recycling program, try taking on those tasks in four dozen municipalities simultaneously. For one Ohio county, that’s business as usual.

The Hamilton County Recycling and Solid Waste District does not provide actual recycling services for its residents, but the county provides assistance and works to lift diversion rates throughout its more than 400 square miles of land area.

With slightly more than 800,000 residents, the county contains communities that are urban, suburban and rural, and its largest jurisdiction is Cincinnati, a city with about 300,000 residents.

There are 48 political jurisdictions in the solid waste district, Balz said, all of which have local control over how or whether recycling is offered to their residents.

What exactly that service entails varies from program to program. Some municipalities contract with a private hauler to provide curbside recycling collection, some use city crews to collect materials. Other communities provide recycling drop-off receptacles.

Recycling in Hamilton County dates back to the 1980s. A state law passed late in the decade required every county in Ohio to form a solid waste district. In some counties, that meant rolling out an entirely new service, often county-managed, for residents to begin recycling. But when Hamilton County’s solid waste district formed, the area already had a strong private sector recycling infrastructure, Balz said, meaning the county didn’t have to build its own materials recovery facility or landfill.

“We relied on the private sector or on individual communities that had their own collection crews,” Balz explained.

Collection programs began with bins and have evolved over the years to the point where the most common recycling program in Hamilton County is curbside, cart-based single-stream collection. Only a couple communities out of the four dozen rely solely on drop-off efforts.

There are no laws requiring residents to recycle, but the majority of communities have automatic recycling, meaning the residents do not have to opt in or pay an additional fee in order to receive recycling service.

“Those communities tend to have higher participation,” Balz said.

A smaller number of communities use a subscription program in which residents must pay an additional fee to gain access to recycling service. 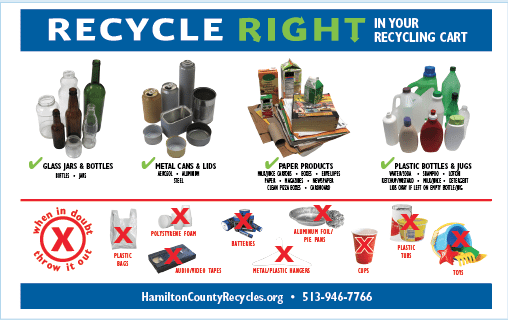 Hamilton County’s residential contamination rate is around 11 percent. It uses a coordinated “Recycle Right” outreach campaign to help residents understand what to put in bins and carts.

County ties it together

With 48 communities and 48 different programs, all managed and operated at the local level, the Hamilton County Solid Waste District takes on a planning and assistance role. The office writes a 15-year solid waste management plan every five years, which looks down the road to gauge whether the county has adequate infrastructure to handle projected service levels.

The management plan also has the county identifying the programming it will use to meet statewide residential, commercial and industrial diversion goals.

“Mainly, our programming is helping anyone that makes trash reduce how much trash they create,” Balz said. The largest program the county provides is called the Residential Recycling Incentive Program, which gives money to communities to help offset the cost of curbside and drop-off recycling programs.

This year, that fund contained $1.05 million that was available for local program assistance.

The county also provides assistance beyond the funding realm. One initiative sends county personnel out to local schools to help them set up recycling programs and educate students about recycling. Under another assistance program, county staff will visit all types of businesses and provide technical assistance and supplies for them to help set up a program.

“We’re not offering the service, but we kind of hold their hand through the process,” Balz explained.
In some cases, the county can fill in gaps in service between its communities. The county has installed three yard debris drop-off sites targeted at residents who don’t have access to curbside organics collection in their local programs.

Much of the county’s work comes down to spreading the word about recycling and educating residents on how best to do it.

A campaign called Recycle Right aims specifically at combating contamination, often by targeting one problem material at a time. The county sends out mailers and uses other paid advertising detailing how to and how not to recycle batteries, for instance.

The county’s diversion rate, including residential, commercial and industrial streams from all communities, sits at nearly 51 percent. The residential contamination rate currently hovers between 11 and 12 percent.

But with the variance in how service is provided from community to community, Balz noted reporting from different programs can leave some discrepancies. Local recyclers are not required to report figures to the county, so the countywide rate is based on a voluntary survey of service providers.

A new year, a new priority

Food scraps have been a particular area of focus for Hamilton County. The county puts on seminars in the spring and fall, regularly drawing 500 attendees and focusing on how to start backyard composting.

But the organics focus stretches upstream as well. For instance, the county has helped develop what it calls school food share tables, which are placed in cafeterias and serve as a space for students to place food they are not going to eat. The food is open to any other students, and if it’s not eaten by the end of the lunch period, it’s donated to a local food pantry.

Part of the county’s solid waste management plan allocates $85,000 per year to work toward a specific priority. Next year, the priority area is organics.

“We’re going to be working on reducing residential wasted food, but then also working on the food recovery aspect of things,” Balz said.