How one state is addressing uneaten food 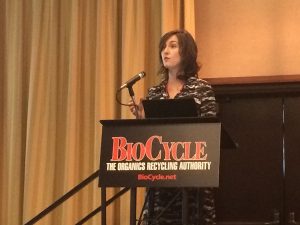 In recent years, efforts out of Oregon have helped set the national pace on topics such as sustainable materials management and recycling metrics. Now, the state is beginning to do the same when it comes to food waste – or, more precisely, wasted food.

At the annual BioCycle Renewable Energy From Organics Recycling (REFOR) event held last week in Portland, Ore., three officials from the Beaver State took to the stage to discuss their ongoing work to intensively study how much potentially edible food is sent to disposal by residents and commercial generators and how those tonnages can be cut down by making adjustments upstream.

The state refers to leftovers and other loads of prepared but uneaten food as wasted food. The term food waste, on the other hand, is a broader category that also includes the inedible portions, such as egg shells and other residuals.

Oregon’s Department of Environmental Quality (DEQ) sees the task of more specifically classifying these different organics subsections as a big part of moving the needle on waste diversion as a whole.

“What we really wanted to do at DEQ was change the conversation,” said Elaine Blatt, senior policy and program analyst at DEQ. “We’re looking to get more of a focus on prevention.”

Reports from Oregon DEQ are cited regularly in industry presentations and conversations across North America. The agency’s “2050 Vision” document has emerged as an influential policy framework, offering an example of how a jurisdiction can try to account for the full life cycle of different materials when making waste decisions.

On the food front, the state earlier this year finalized a formal strategy geared toward limiting wasted food. The plan, which aims to support goals laid out in the 2050 Vision, identifies nine areas in which the state can nibble away at the tonnages of edible food going to disposal.

DEQ points to statistics that lay out the enormity of the wasted food situation. According to the department’s strategy document, between 25 and 40 percent of food produced or imported for consumption in the U.S. is never actually eaten and $218 billion is spent nationally growing, processing, distributing and preparing food that ends up in the waste stream.

In a presentation at REFOR, DEQ’s Ashley Zanolli compared the cost of wasted food to an iceberg. A relatively small amount appears above the surface as disposal fees. But the bulk of the financial impact lurks unseen, with expenses going into growing, transportation and preparation.

“When we only focus on disposal, we’re selling ourselves short,” noted Zanolli, who formerly worked on food waste issues for the U.S. EPA.

A big part of Zanolli’s work at DEQ to date has been a study to better understand both residential and commercial behaviors that lead to wasted food. Such research is one of the nine bullet points noted in the larger food strategy.

The state is currently in the process of finishing a statewide survey to residents, and DEQ staff also undertook qualitative interviews with 32 Oregonians to dive deeper into the specific ways individuals handle food.

Additionally, the state is working on case studies of 15 different commercial and institutional outlets to understand and articulate realities of wasted food in the food-service realm.

“Ideally, the case studies we’re doing in Oregon can be a launch pad for other jurisdictions,” Zanolli said.

Regardless of how much attention DEQ’s work gets from leaders elsewhere, top decision-makers in Oregon itself seem committed to addressing the issue.

In her talk, Sadhir said the average Oregon family spends $1,600 annually on food that never gets eaten.

“The biggest gains can be made when we can reduce this on the front end,” she noted. “We have to be tireless, and we can’t do it alone.”