Realities of a key recyclable

The following is an edited excerpt from “Aluminum Upcycled,” published earlier this year by Johns Hopkins University Press. In the book, author Carl A. Zimring offers readers a complete look at the way scrap aluminum has played an increasingly important role in product design since World War II. Along the way, he lays out the factors that have fueled the growth of aluminum recycling as well as the less-discussed downsides to secondary aluminum production.

These statistics in many ways characterize the relationship between states and the secondary material industry. Attempts to legislate producers’ responsibility led to deposit laws in a few states. More broadly, attention to recycling as an environmental ethic led the federal government to pass solid waste legislation in the 1960s that encouraged municipalities to study and optimize their waste management programs. What resulted was a patchwork system of municipal drop-off and collection programs – more than 10,000 across the United States by 1990, according to Martin V. Melosi’s 1999 book “The Sanitary City.”

European approaches have included somewhat more centralized federal programs. … In Western Europe, aluminum recycling more than tripled in 24 years, expanding from 1.4 million tons in 1980 to 4.7 million tons in 2004. Further, in 2008, the European Aluminium Association estimated that more than half of the aluminum produced in the European Union that year originated from recycled material, a trend that was on the increase. 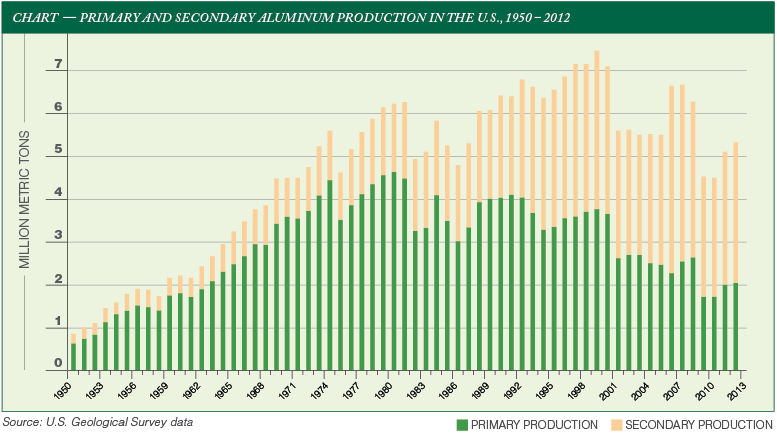 The largest aluminum producers in the world happily welcome these collections of post-industrial and post-consumer metal into their operations. Since 2005, the largest consumer of aluminum cans in the world has been Novelis. The company spun off that year from Alcan, the largest aluminum producer in Canada and a company in business since 1916. Although Novelis is headquartered in Atlanta, since 2007 it has been part of Mumbai, India’s Aditya Birla Group. Novelis now has operations in the United States, the United Kingdom, South America, East Asia, and Europe.

The largest supply of secondary aluminum purchased by Novelis is used beverage cans (UBCs). In 2006, the company recycled 38 billion aluminum cans worldwide, accounting for more than 550,000 tons of aluminum and consuming about 45 percent of the UBCs recovered in the United States and Canada.

Collections from curbside recycling get bundled and sold to Novelis. Scrap from construction, demolition, and post-industrial uses gets combined by brokers into larger shipments, which are purchased by Novelis, Alcoa, Reynolds and their global competitors. Unlike most industries, the scrap aluminum trade has many suppliers providing material to a small number of large customers.

This system works because of the materiality of the metal. For example, alloy 7074 made by Sumitomo, Reynolds and Alcoa has been well-suited for both trading and processing. Aluminum’s malleability has allowed for secondary trading and processing at a large scale. (It also makes it, like other metals, grist for theft since tracing stolen aluminum bleachers or siding, once it has been shredded and re- melted, is difficult.)

How exactly did this recycled aluminum sector develop? By 1960, the large technological system that produced aluminum had incorporated an additional industrial loop. The use of secondary material reduced the damage of mining and lowered expenditures on energy. Recycling aluminum allowed more goods to be made at lower cost, providing market incentives for salvage. The governmental interventions of the late 20th century were an augmentation of existing scrap aluminum programs and helped to make the metal a material of mass consumption. Producing secondary aluminum is an affordable alternative to mining more bauxite, and the abundance of aluminum to salvage from cans, old aircraft, packaging and the sundry other uses developed during and after World War II means this affordable alternative is available at a scale large enough to make it a significant input in industrial production.

For these reasons, secondary aluminum now has cachet as a sustainable material. The U.S. Green Building Council considers use of recycled materials in its Leadership in Energy and Environmental Design (LEED) rating system of architectural sustainability. Recyclability is why sustainable architecture employs aluminum despite the destructive toll of the metal’s primary production. 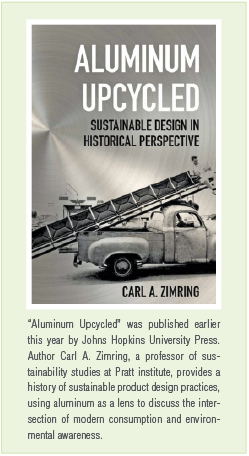 In addition, the economics of recycling aluminum have made reclamation a success. One researcher has estimated that 73 percent of all aluminum produced globally since 1950 “was still in service” in 2003, and another estimated in 2013 that more than two-thirds of all the aluminum that had entered the United States since 1900 was still in use. Moreover, secondary material has represented a significant fraction of all aluminum produced for most of its history. By 1950, scrap made up about one-third of all aluminum used in production in the United States; in 2009 the proportion of scrap in aluminum production was more than 60 percent. If any mass-produced material can claim to have circular flows over time, aluminum is that material.

The cultural dimensions of aluminum reuse include the rhetorical pleas for efficiency and patriotism in World War II salvage campaigns and the championing of recycling by environmentalists and industries since the late 1960s. By that time, the aluminum industry’s promotional efforts had increased awareness among designers that salvaged aluminum was both durable and more affordable than virgin aluminum.

And recycling has provided a significant source of American aluminum beyond that used in cans, foil or warplanes. The variety of goods fashioned from aluminum has expanded since the mid-1950s. Recycled material has made aluminum more affordable and abundant, and any consideration of the goods made of aluminum since 1950 must take into account that recycling helped make those goods possible. The cans, lawn furniture, siding and wiring we see on the market today all benefited from recycled material. Vehicles, durable furniture and musical instruments have also benefited from recycled material.

However, there’s more to aluminum recycling than just keeping material out of landfills and reducing production costs for new items.

The U.S. Centers for Disease Control identifies skin irritation, pulmonary fibrosis, and other respiratory system diseases as occupational health hazards associated with aluminum exposure, and regulators in the United States and Europe have observed environmental problems associated with recycling the metal since the 1960s.

Furthermore, a 1970 legal study noted the problem of solid wastes produced by removing impurities in scrap aluminum, wastes that necessitated using collection methods such as a baghouse or electrostatic precipitator. Chlorine gases are frequently used in aluminum production, creating noxious fumes. Burning off impurities in the processing of scrap aluminum may release airborne dioxins and furans, compounds known to be carcinogenic. Liquid ammonia is also a common byproduct. These emissions both endanger human health and make processors subject to regulation in the United States and the European Union.

A 1979 British reference manual, the “Waste Recycling and Pollution Control Handbook,” noted that pollution control in scrap aluminum processing was a serious problem. Wastes produced by aluminum recycling included fumes from the degreasing and de-oiling of swarf (metal filings) as well as solid wastes (slags and mineral impurities). Processors could manage wastes with investments in technology, but “the severity of the pollution prevention requirements is illustrated by the fact that the cost of pollution control can be about 75 percent of the cost of the basic smelting plant,” the handbook noted. 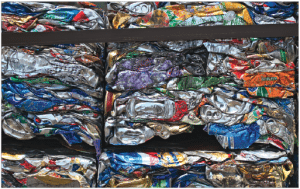 Unlike most industries, the aluminum scrap trade has many suppliers providing materials to a small number of large customers.

More than 20 years later, another British survey of the scrap aluminum industry described the salt slag and other waste products from secondary smelting and dross processing as presenting “a problem of disposal. In some areas it is classified as a hazardous waste product and must be dumped under controlled conditions. The disposal cost of slag in Europe is commonly $50 per tonne or more, and this cost and the regulation of disposal has raised interest in the recycling of salt slag.”

Wet Venturi fume scrubbers use a caustic solution spray to break down the fine particles and dissolve the chemical gases. Once this is accomplished, the solution is scrubbed away and requires its own disposal as a toxic waste. According to the book “Operations in the Nonferrous Scrap Metal Industry,” wet Venturi scrubbers are also “very expensive to buy and install, are difficult to maintain, and the costs are very high to operate, causing additional substantial costs to the smelting operation.”
Subsequent technological solutions included means to process dross, salt cake and ammonia.

Recycling reduces the negative impacts of mining and does result in energy savings and extensions of the life of materials. Producing those technical nutrients, however, releases toxins that could poison workers, neighboring residents, and ecosystems. Although the contaminants released by recycling pale compared to the ecological damage of mining and smelting primary aluminum, the waste products of scrap recycling must be noted when considering the consequences of returning the metal to production.

Carl A. Zimring is an associate professor of sustainability studies at Pratt Institute in New York City. In addition to “Aluminum Upcycled,” he is the author of “Cash for Your Trash: Scrap Recycling in America” and “Clean and White: A History of Environmental Racism in the United States.”