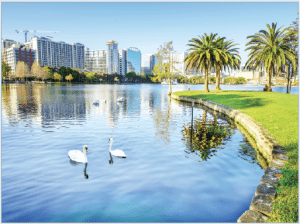 It can be difficult for a recycling program to implement major changes. Switching to single-stream, including more materials or removing others from the accepted list can all lead to more contamination in the stream.

In Orlando, Fla., the city’s Solid Waste Division has successfully transitioned its program in the past through phased-in implementation and substantial public outreach. It is currently using those same methods to evolve the program again and increase collection service.

“It helped us identify problems or concerns of our customers, starting with the introductory meetings, and then as we went through, ways to solve it,” said Mike Carroll, Orlando’s Solid Waste Division manager.

Curbside recycling in Orlando launched with a modest newspaper program in 1990. After a consultant analyzed the program’s early results, in 1992 the city rolled out a two-bin system. Newspaper, which was still the only fiber collected, went into one bin. In the other, residents placed glass, aluminum cans, and PET and HDPE bottles.

“That remained our method, with a little change here and there based on market conditions and what our processor could handle,” Carroll explained.

Additional fiber materials were accepted over the years, bringing in magazines, cereal boxes, and eventually almost all types of paper products. Then, in 2007, Orlando switched to a single-stream, cart-based system and began accepting a wider variety of materials. The program now accepts plastics Nos. 1-5 and 7 as well as glass, metal and a broad range of paper.

“When I go to a homeowners association, it’s much simpler,” Carroll laughed. “I just tell them what they can’t put in.”

Carroll noted glass has the weakest market of all the collected recyclables. There are two bottle plants in Florida, but most of the glass must be trucked out of the state to find an end use. Other collected glass in Orlando is utilized as alternative daily cover, road aggregate, a paint additive or in construction materials. 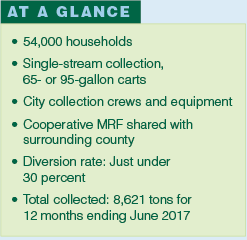 Orlando’s recycling program is city-run, with city-owned carts and trucks and municipal collection crews. Collected materials are transported a little more than 10 miles to a cooperative MRF that’s shared with the surrounding Orange County and several other smaller municipalities. The MRF is owned by the county and operated by Recycle America Alliance.

During the 12 months ending in June, Orlando crews collected 8,621 tons of recyclables from the residential single-family stream.

“I like to remind customers, they’re already paying for [recycling], please use it,” Carroll said.

Single-stream recycling turned around a trend of declining recyclables collection volumes a decade ago, Carroll said. That decline was driven by package lightweighting and packaging reduction. Annual collection had dropped into the 5,000 ton range before carts came into the equation.

Orlando introduced single-stream collection with a phased approach that allowed time to educate. Carroll noted contamination didn’t significantly increase during the single-stream rollout, and he attributed that fact to gradual implementation as well as long-time residents who were well-trained in proper recycling from years of source-separation.

The city is now using the same tactic to introduce another substantial change to the recycling program.
In the years since single-stream was introduced, Carroll has heard a common remark from homeowners and neighborhood associations across the city. With the larger recycling carts and the volume of material residents were able to recycle, the every-other-week collection schedule was too infrequent, they said.
“We did a once-a-week collection pilot with a very small number of homes,” Carroll said. “Two garbage routes, basically, a little over 4,000 houses for a little more than a year.”

During that period, city staff learned the common concerns residents were voicing. Larger families were concerned about the reduced garbage collection, so the Solid Waste Division started offering a free second garbage cart to households that were utilizing their recycling bins. Households can also request up to six extra collections per year.

Now, Orlando is rolling out weekly collection citywide, phasing it in one-third of the households at a time.

“We’re doing it in thirds, quite honestly, because that’s about how many homes we can handle questions and concerns with good, hands-on customer service,” Carroll said. “If we switched the whole city, we don’t have enough people that know this business and know how to solve the customer questions.” 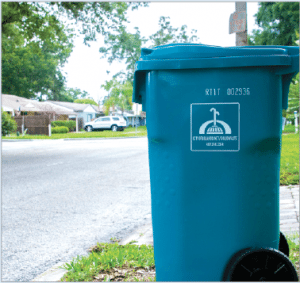 Orlando is currently transitioning to weekly curbside recycling pick-ups. The system had collected every other week, but city officials determined that to be too infrequent once single-stream collection was implemented.

Looking down the line

Florida has a 75 percent statewide diversion goal it aims to meet by 2020. That target, which counts waste-to-energy as diversion, has been slightly de-emphasized as it was legislated into effect, but Orlando has also adopted city-specific recycling goals. The city is aiming for zero waste by 2040.

“When you pick a target, you pick an ambitious one,” Carroll said.

That means the trend will likely continue toward more recycling initiatives in the city, and efforts are underway toward capturing material from new streams.

For example, Orlando offers backyard compost kits to residents at no extra charge. And another change under consideration is on the commercial recycling side. Carroll said he often hears from apartment residents and office workers that they like what the city’s doing on the single-family side, but that there are no recycling options for commercial buildings.

“We want to solve that, we want them to have the opportunity to recycle wherever it is they live or work,” Carroll said.

A pilot program is underway to communicate details of the potential ordinance to developers, apartment managers and building owners. It would follow the familiar phased approach, with the first phase requiring future construction projects to require recycling facilities. The second phase would target the largest existing commercial properties, with further phases addressing smaller and smaller buildings.