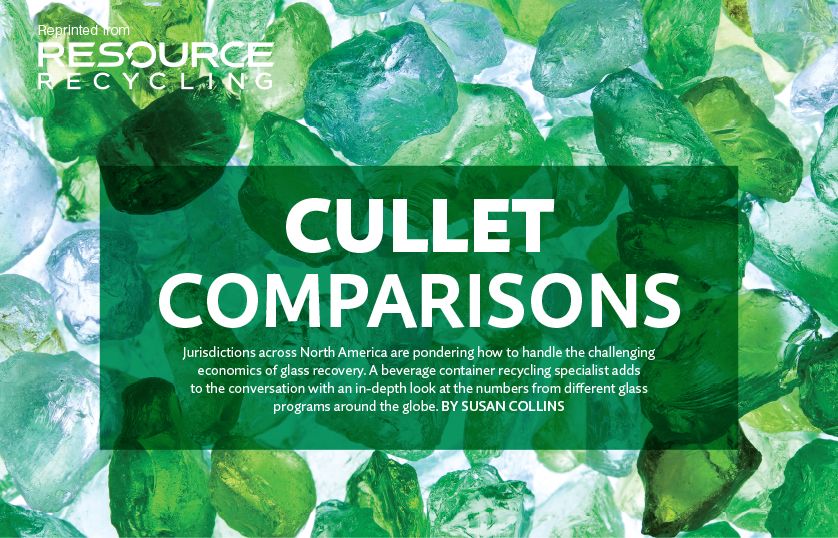 Glass recycling has been in the news a lot lately in the United States. Some cities have removed glass from their curbside programs while others have started new glass drop-off programs.

However, in nearly all the media coverage, the subjects of quantity, quality and efficacy were missing. There was no discussion of how much glass was being recycled, how much was lost due to destructive collection and sorting techniques, how much could be recycled under optimum conditions, or how glass could contribute to total household or community recycling rates.

Those nuances of glass recovery are critical to understand as cities and stakeholders try to make the best decisions about handling the material. Glass, after all, remains a major part of the materials mix. In the U.S., about 38 billion glass beverage containers are consumed each year, and that number has held steady since 2010. When other food and non-food containers are also considered, total glass generation comes to roughly 80 pounds per person per year (generation rates will vary somewhat from state to state, mainly due to the relative popularity of beer versus wine, and cans versus bottles).

Furthermore, glass is making up a larger segment of the municipal recycling stream. Back in 2012, the Container Recycling Institute calculated that glass accounted for 17 percent of all single-stream curbside tonnage, by weight. More recently, some industry experts have estimated glass makes up 20 to 25 percent of all MRF materials by weight as paper continues to decline. This is too large a percentage of the stream to ignore.

To help paint a more detailed picture of this segment of the industry, CRI recently began researching glass recycling quantities diverted through different program types, using a common metric of pounds per capita per year of furnace-ready glass. Making an effort to distinguish the material that is of high enough quality to use in production of new containers is important because not all glass coming out of the back of processing facilities is the same.

Glass “cullet” can be used in place of silica, limestone and soda ash and other ingredients to make new glass bottles or fiberglass. Cullet is defined as recycled broken or waste glass used in glassmaking, and furnace-ready cullet is uniform in size, free of contaminants and often sorted by color. Cullet creation is the form of glass recycling that saves huge quantities of energy and toxic emissions.

Glass fines, meanwhile, can be used as abrasives, and many recycling programs use lower quality glass as roadbed or aggregate. But these uses don’t have the energy savings of cullet sent to a furnace.

Why do we see recovered glass end up in these various forms? The variety of collection techniques across jurisdictions creates the range in quality at the end of the process. Some recycling programs collect whole, separated glass containers, and have a yield rate of 97 to 98 percent, with most of the “contamination” being the labels and caps that are attached to containers. Other programs collect glass mixed with other materials.

In addition, the industry sees a variety of sorting techniques at MRFs – often, imprecise processing leads to contamination problems or glass crushed into pieces that are too small to be considered furnace-ready.

Clearly, it would be advantageous to understand how much recovered glass in modern recycling programs is actually high-quality material, and to begin to address that issue, we reviewed available statistics from both common and unique glass collection systems in several areas. The research looked into glass collection programs in three U.S. cities and one city in the U.K.; glass collection programs in five states and one Canadian province; and results from some cities in the European Union, as reported by FEVE, the European federation of glass packaging producers.

The findings detailed in this article are too preliminary to be considered true benchmarking, but the work nevertheless serves as a good first step as the industry continues to explore the possibilities in glass recycling. Our findings follow, ranging from modest collection volumes to truly exemplary results. 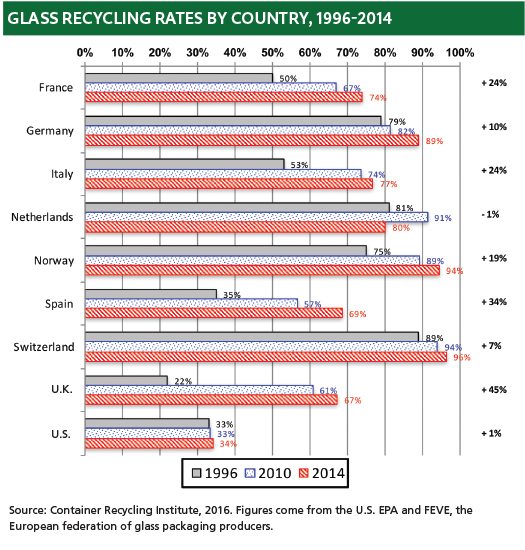 Around the country and the world

Before we begin to look at metropolitan-area and statewide programs in the U.S. and elsewhere, let’s see how glass recycling in the United States compares with European programs. The European Union established the Packaging Directive in 1994, which set material-specific targets for recycling, including the glass recycling target of 60 percent.

Of the 28 countries in the EU, only Greece and Cyprus, at 21 percent and 32 percent, respectively, have lower rates than that of the United States.

As mentioned above, however, variations abound in the effectiveness of glass recovery efforts across the U.S.

The RIRRC recently worked with recycled glass processor Strategic Materials, Inc. (SMI) to build a small, auxiliary facility for the sole purpose of pre-cleaning the post-MRF glass before sending it to the SMI glass beneficiation facility in Massachusetts. In 2014, RIRRC’s MRF produced 13 pounds per capita of glass. Most materials processing executives say that glass from typical single-stream processing facilities will yield about 65 percent usable cullet, with the remainder being fines and non-glass residue. After accounting for these losses, we can conclude that the yield in Rhode Island is about 9 pounds per capita of furnace-ready cullet.

CRI research on Ohio data showed a similar per-capita figure. The 2011 gross glass collection rate in Ohio was about 9.5 pounds per capita, according to the “Ohio Glass Recycling Study Final Report,” produced for the state. This includes residential and commercial curbside and drop-off recycling programs, as well as a small amount of “additional glass recycling.”

After adjusting for losses, we estimate a yield of 7 pounds per capita in the Buckeye State.

In other states, significant effort has been put into developments specifically aimed at improving glass recycling. 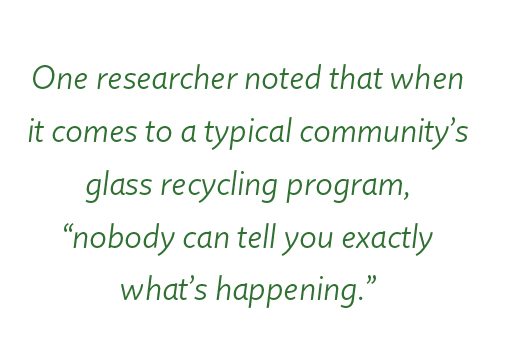 One example is North Carolina, which is home to three glass beneficiation facilities and three glass-bottle-making plants. North Carolina is the only state with legislation requiring bars and restaurants to recycle glass, and a program aimed at those generation points collects about 30,000 tons of material per year, or 6 pounds per capita. In addition, municipal curbside collection and drop-off programs have a gross collection rate of 25 pounds per capita.

When we bring those figures together and adjust for contamination and loss typical of municipal collection, we arrive at a North Carolina furnace-ready estimate of 22 pounds per capita.

Scott Mouw, the state’s recycling director, told us that because North Carolina does not have a container deposit law in place, “increased glass recovery depends on other general improvements to the recycling system, such as conversion to carts, or other kinds of special legislation.”

Even greater levels of recovery of quality glass can be seen on the West Coast. California and Oregon both have beverage container deposit laws, and in 2015 the glass redemption rate in California was 73 percent while Oregon’s redemption rate came in at 67 percent. Neither system includes wine or spirits. Oregon’s law currently covers most carbonated beverages plus still water, and California’s law includes additional non-carbonated beverages, like tea and coffee.

In addition to the container deposit laws, both states have rigorous collection programs for residential and commercial customers statewide. And in California, the law requires recycling collection for multi-family residential buildings and commercial businesses that generate 4 cubic yards of trash or more per week. Many Oregon community programs, including the one in Portland, provide separate glass-only collection in the residential sector, according to a 2008 study by the Oregon Department of Environmental Quality.

Adjusting for losses, the states produce 41-42 pounds per capita per year of furnace-ready glass. 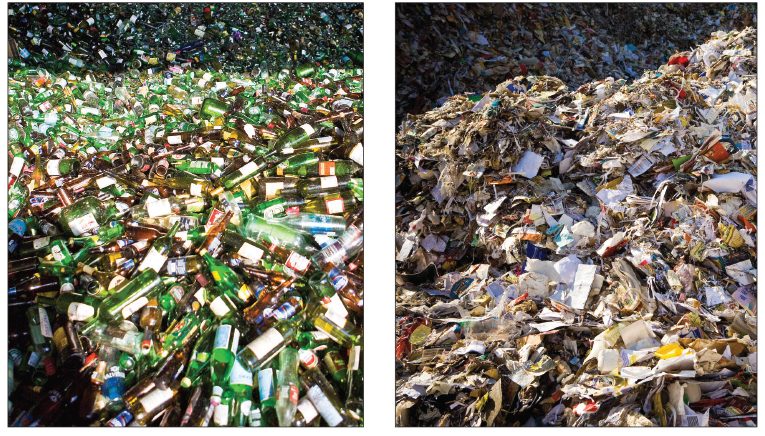 The two photos above were taken on the same day at the glass processing center in California. The image on the left shows bottles collected at a redemption center, the image on the right is a highly contaminated glass load delivered from a single-stream MRF.

Looking at the municipal level

While state and provincial efforts have had effects in glass collection, other initiatives have been implemented more locally. For example, Missouri and Kansas do not have container deposit laws, and the cities in the Kansas City metropolitan area do not collect glass in curbside recycling programs. The lack of availability of glass recycling programs was an inspiration for the founding of Ripple Glass in 2009 by three executives from Boulevard Brewing in Kansas City. Ripple placed 60 40-cubic-yard purple roll-off bins in carefully selected locations throughout the Kansas City metropolitan area to serve as drop-off locations for glass containers.

Ripple collects the glass and processes it at its $4 million facility. In later years, small companies began offering door-to-door glass-only pick-up programs, collecting glass from individual households as well as bars and restaurants in the metro area. Ripple reports that this material has minimal contamination, and the resulting furnace-ready cullet is sold to the nearby Owens Corning fiberglass manufacturing facility and other manufacturers.

Ripple Glass is processing about 18 pounds of glass per capita per year in the Kansas City Metro area, an estimate based on Ripple’s statement that it provides one roll-off bin per 20,000 residents, with each bin yielding 180 tons of glass per year.

The City of Leeds in the U.K. has established “bottle banks,” or glass recycling drop-off points, with one location for every 1,900 people in the city. In 2015-16, the initiative collected approximately 28 pounds of glass per capita, or 50 percent more per capita than the Kansas City metro program.

Finally, for a unique municipal program dedicated to delivering high-quality glass, we can look to the City of Fayetteville, Ark. The municipality collects glass from single-family homes using multiple 18-gallon bins, and city crews hand-sort the recyclables at the curb into multiple compartments in curbside-sort trucks. Multi-family residents at several large complexes, meanwhile, are required to sort their recyclables by material type, into multiple compartment roll-off bins. Also, about 50 rollcarts for glass collection are currently in use by businesses in areas such as the city’s entertainment district. These efforts all ensure glass remains separate from other materials, leading to clean loads. Ripple collects the consolidated glass from the city and provides free transportation (236 miles one-way). Altogether, Fayetteville recycled 1,569 tons of high-quality glass in 2016, or 38 pounds per capita.

Limited by lack of information

The United States as a whole recycles about 23 pounds of glass per capita, but we’ve estimated that about 50 percent of that comes from the 10 states with container deposit laws. 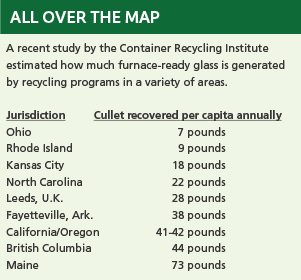 Our research also found that there is a lack of information specific to glass recycling quantities at the city and state level, and even less information is posted on websites to inform residents where their glass was going once it was collected. After a few weeks on this project, one researcher noted that when it comes to a typical community’s glass recycling program, “nobody can tell you exactly what’s happening.” When there are good reports on the gross quantities of glass shipped, the yield was unknown, as was the amount of furnace-ready glass versus lower-quality glass versus residue to landfill.

To help the U.S. improve its national rate of glass recycling and to ensure more of that material is of higher quality, some key actions can be considered. First, policymakers and state and municipal decision-makers can take steps to improve glass recycling by putting more exact language about what “recycling” means in their recycling contracts and include reporting provisions on the tons sold and quality levels.

In addition, not all MRFs are performing to the same standards, so a nationally recognized glass specification would help. Facility certification is another best practice, and it is being used around the country already for facilities that handle construction and demolition debris.

Those steps – and continued research into the quality levels of recovered material – can help bring some much-needed transparency into glass recycling.