Community Spotlight: Major city grows program by keeping residents and haulers on board

The 10th largest city in the country has a diverse population that spans 180 square miles, yet it manages to achieve a 72 percent citywide diversion rate. The director of environmental services for San José says the key to achieving such a rate is simplicity.

Kerrie Romanow has led the environmental services department for five years. Before that, she spent five years as the assistant director.

San José has several programs that produce clean materials and are simple for customers to use. And while some of these programs have been successful on smaller scales, San José is the largest city to implement them, particularly the “loose in the street” yard waste program.

“So if you cut down a tree, you just chop it up into 4-foot segments and you leave it at the curb,” said Romanow. A claw truck is used to pick it up.

This program was implemented in the early 1990s as a way to increase diversion tonnages. Recently, the City tried to move away from loose in the street to a cart for both yard waste and food scraps, but Romanow said residents didn’t take to the change.

“Our residents really did not like having the yard waste cart,” she said. In addition, some of them needed more than one cart because palm fronds didn’t fit inside. 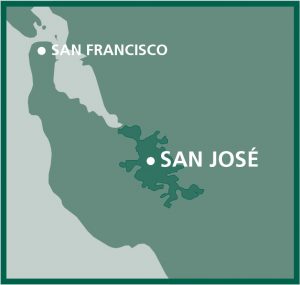 This failed pilot project around organics carts exposed many of the benefits to the loose in the street program. For example, said Romanow, people tend to sweep their sidewalks, medians and other common areas more often when they can just sweep the material right into the street.

In addition, gardeners don’t have to haul the material away with them and the stream is a lot cleaner than when it is mixed with food scraps. The yard debris material is taken to a large state-of-the-art composting facility in southern Santa Clara County for composting. Most of this material is used for local agriculture, including organic crops.

For commercial clients, San José has a wet/dry system for refuse. Everything that is wet, mainly food, goes into the wet can, and everything else goes into the dry can. Romanow said that arrangement makes it easy for commercial generators to separate material instead of stressing about what is recyclable and what is not.

The collectors sort the dry material on the back end, and because it is separate from the wet material, the collectors are able to recover and sell high-quality materials. A portion of the wet material is sent to a large dry fermentation anaerobic digestion facility in north San José, which creates biogas for energy and compost.

When this system went live in 2012, participation went from 23 percent to 80 percent, said Romanow.

Multi-family properties use a similar system.

The program Romanow is most proud of is the city’s large-item curbside collection initiative. Each resident gets two free curbside removals each year of a large item. That large item can be something like a large bag of trash, a refrigerator or a couch. Multi-family residents get unlimited large-item pick-ups.

Some of the programs within the City of San José are a direct result of hauler suggestions. For example, the City allows some small electronics and bags of textiles and clothes inside the blue recycling cart, right alongside the milk jugs and scrap paper.

“The haulers are very good at finding markets and being able to collect material,” Romanow said. 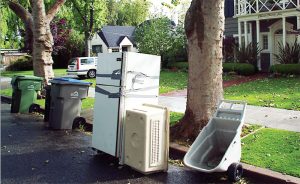 San Jose allows each single-family household to have two free collections of large items at the curb each year. The initiative has cut down on illegal dumping.

One hauler, Garden City Sanitation, is also responsible for a small pilot project involving split carts in residential neighborhoods. Garbage goes in one side of the cart, food scraps go in the other.

“[The haulers] are great partners, they’re very flexible,” she added. “Anything they can get a market for, they’re super interested in. Anything we think can be reusable we’re interested in. And so together we just try to make it as easy as possible for our community.”

San José has a goal to reach zero waste by 2022. Romanow acknowledged the City has a ways to go to reach that aspiration, but she said a simple approach is the best way to move forward on it.

“Like many municipal services, you really have to customize things to the community,” Romanow said. “San José is very pragmatic and if it makes sense, our community does it. Residents are not going to do some things that take a lot of extra effort. We try and make it very easy for our customers to participate in the system.”

“We don’t send big mailers, we send postcards,” said Romanow. The postcard has the key message written on it in all three languages. It used to be just in English and directed speakers of other languages to go online. Romanow said the new system is reaching people much better.

Romanow thinks San José can be used as a model for any community looking to increase its recycling rate.

“If something works in San José, I honestly believe it can work anywhere. We have such a diverse population and we’re so spread out,” she said. The City isn’t concentrated like Chicago or San Francisco, cities that have some sort of uniformity to them, she noted.

“We tend to be kind of middle of the road in terms of adopting things,” she acknowledged. “If we can make it work here, it can probably work anywhere.”