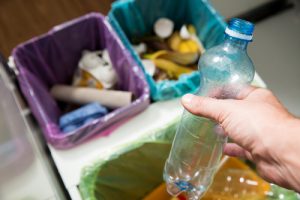 Plastic products sold in California with “biodegradable” and “compostable” printed on their labels cost Walmart nearly $1 million in a settlement earlier this month.

Walmart is not the first company to find itself at odds with California law: The first lawsuit citing the law came in 2011, when three water bottle companies were sued by California’s attorney general for making “false and misleading claims” about how their products break down. The case was settled the following year.

It’s a scenario that could be popping up more and more as advocacy groups push for more states to follow suit, according to the US Composting Council, which has written model legislation for regulating labels.

In the Walmart case, a group of 23 district attorneys in the state sued the retailer and its affiliate, Jet.com. Nancy O’Malley, district attorney for Alameda County, which includes the cities of Oakland and Berkeley, said in a statement that the retailer sold plastic products with labels out of compliance with state law.

“Unfortunately, Californians concerned with reducing plastic waste in landfills are commonly misled to purchase plastic bags and other plastic products based on marketers’ unsubstantiated claims of biodegradability,” O’Malley said, “but almost nothing breaks down in a landfill. That’s why the sale of plastic products labeled ‘biodegradable’ is illegal in California and why today’s settlement is a win for both consumers and the environment.”

Walmart expressed appreciation to California’s district attorneys for working with the company and reiterated its emphasis on sustainability in its products.

“We’re proud of the enhancements we have made to help ensure that the products we sell to California customers are in line with the State’s guidance on biodegradable labeling,” said Randy Hargrove, Walmart’s director of corporate communications, in a statement to Resource Recycling.

In 2011, California became the first state to pass legislation regulating biodegradability claims on products, but the federal government has had rules on the books for years through the Federal Trade Commission (FTC) Green Guides. These guidelines establish definitions for various measures of environmental friendliness.

In October 2013, the FTC took action against six companies regarding compostable and biodegradable claims, including one that was sanctioned with a $450,000 fine (one of these was tied up in lengthy proceedings for years after the initial action).

But there are many products that are noncompliant with the FTC guidelines, yet don’t make it to federal attention, Oshins said, leading some states to seek their own legislation.

“It’s hard to take a case straight to the FTC,” Oshins noted. “They just don’t have the ability to enforce those laws.”

Other states are looking to follow California’s lead, particularly when it comes to plastic bags.

Minnesota enacted a statute last year strictly regulating the labeling of plastic bags in the state. Lawmakers in Maryland are considering a similar bill that would place prohibitions on biodegradable and compostable packaging. A bill proposed last week in the Illinois legislature would take roughly the same action.

“The same labeling that would work in California would work anyplace else, because it is more restrictive,” Oshins said. “If everyone just complied with the Federal Trade Commission’s Green Guides, that would go a long way. The fact is that many don’t.”

Bob Lilienfeld, a packaging expert who works with the American Institute for Packaging and the Environment (AMERIPEN), a packaging industry group, agreed that the safest bet for companies is to comply with California’s law across the board.

“Your best course of action is to follow the toughest state regulation you can find,” he said.