Community Spotlight: A rural program with a history of pushing boundaries 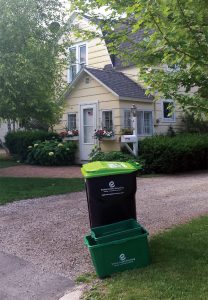 A small and diverse rural community along Lake Michigan is forging its own path when it comes to recycling.

Emmet County’s Department of Public Works (DPW) started its recycling program back in the 1980s. It didn’t take the county long to realize it needed a dedicated leader if it wanted a self-sustaining and long-term program. Elisa Seltzer was hired 26 years ago and has been there ever since.

Over the last quarter century, the northern Michigan county has consistently increased the number of materials it collects and its diversion rate. The recycling program, which receives no county general fund money, is funded mostly by the sale of recyclable and has run in the black every year since Seltzer took charge.

Emmet County owns and operates its own materials recovery facility (MRF). It also employs its own haulers and drivers for recycling. The county processing facility has evolved into a hub-and-spoke MRF and contracts with five other communities to serve a total of 90,000 to 100,000 households.

“Of all the counties that we service, we’re the only one where we provide both commercial and residential curbside recycling to 60 percent of single-family households,” said Seltzer, who is director of the county’s DPW. Overall, the participation rate is 80 percent and the recycling rate is 42 percent, she noted. 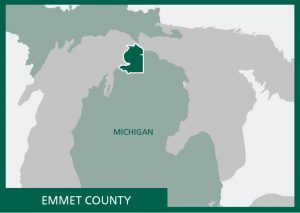 Emmet County has operated a dual-stream curbside program since 2010. “Before that, we were source separated so our trucks had five compartments and people had one bin and the driver was sorting the five different materials into the compartments,” Seltzer said.

She added there are clear benefits to dual-stream. The approach yields very clean materials, allowing the county to sell commodities that some single-stream systems can’t. These items include green glass, plastic containers and film.

“We have really strong markets for our clean materials,” said Seltzer.
In the county’s collection paradigm, cardboard, paper and bags go in a covered, 64-gallon rollcart, and mixed containers (glass, plastic and cartons) go in two bins.

In all, residents have 100 gallons worth of capacity available to them every week.

Emmet County also operates 13 drop-off sites that are free and open 24 hours a day. When Emmet County offered residents rollcarts over the summer, Seltzer was sure she would see a decrease in the material coming into the drop-off sites. But she said recycling went up through all avenues.

“The more convenience and the more options you give people, the less likely material is going to get wasted.” said Seltzer. 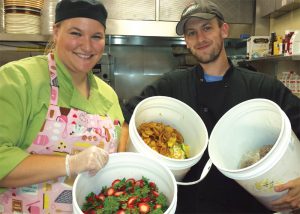 Two years ago the county launched a food-scraps recovery pilot initiative aimed at the commercial sector.

Collecting plastic bags curbside is rare, but for Emmet County, it makes sense. “They’re easy to pick off the sort line and be recovered,” said Seltzer.

All bags, film and overwrap go inside one bag which is tied shut. It then goes into the rollcart with the paper and cardboard. Seltzer admits adding plastic film to the program in 2010 caused some trepidation.

It works for the county because its MRF is set up for dual-stream processing.

“Because we’re dual stream we don’t have all that front-end equipment that gets clogged up with plastic bags, which is why other MRFs don’t want them,” said Seltzer.

Seltzer thinks one reason the program works so well is because it gives people a reason to recycle. “We build in incentives everywhere we can, lots of carrots,” she said.

One strategy is the county’s pay-as-you-throw program. While Emmet County doesn’t handle garbage collection, it does license all haulers and companies that do, and the County requires solid waste collectors to charge based on volume.

Emmet County also runs the area transfer station, and charges more to landfill items than to recycle them. For example, the County used to collect mattresses for landfilling at $24 each. In 2013, Seltzer found a company that recycles mattresses for less than the price of landfilling, so the mattress fee is now $12. “That’s a price incentive, that’s all that is,” she added.

The County offers similar price incentives for things like wood and asphalt shingles. There is never a charge for hazardous waste recyclables collected from households. 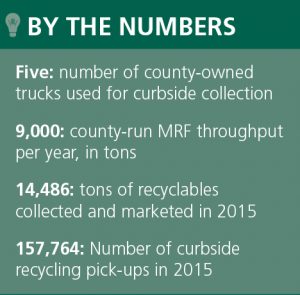 Emmet County is also in its second year of a pilot food-scrap collection program. Twenty commercial entities are currently taking part, including restaurants, bars, florists, bakeries and even the local casino. In the first year, Emmet County collected 90,000 pounds of food and floral scrap. During the second year, it collected 220,000 pounds and is expanding the pilot program to the winter months. (The County is providing liners to the 64-gallon bins used in the program to prevent food from freezing and sticking to the inside.)

The achievements of Emmet County are hard to find in other places. Seltzer thinks part of the success, especially when it comes to participation, is a result of being transparent. The County lists all the mills and factories it sells its commodities to, and 97 percent of the commodities go to businesses in Michigan.

“I think that people like to hear that it’s keeping jobs and resources in the state,” said Seltzer. “We’re all about ‘you can make a difference in your own life by recycling.”