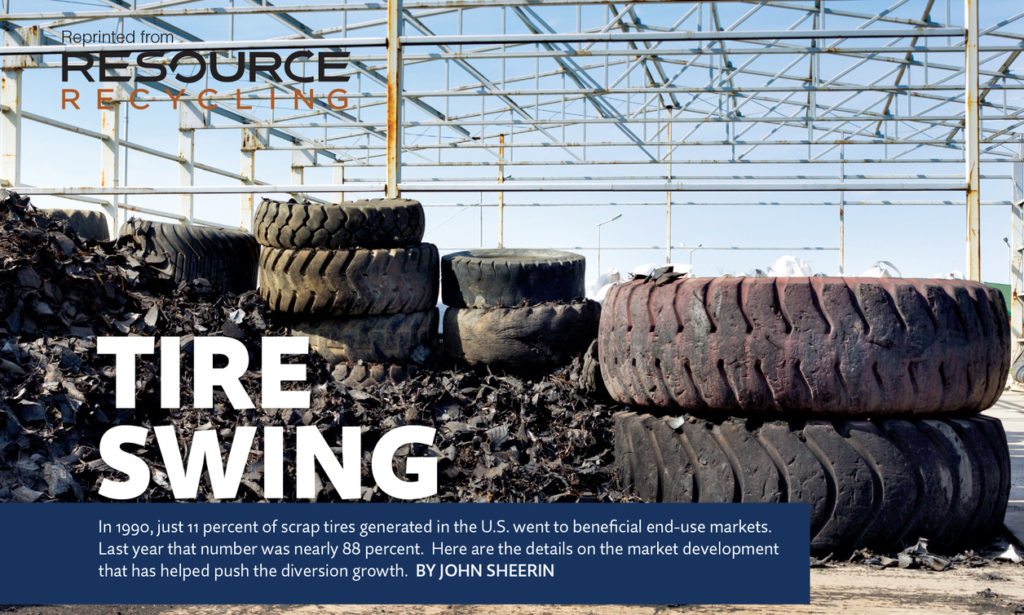 Scrap tires have long been treated as a challenging solid waste management issue due to the multiplicity of materials used in tire construction and the practically irreversible vulcanization of the rubber that makes the tires strong. However, working with states, industry, academia, and other partners, since the 1990s the U.S. has developed a strong and highly successful scrap tire management industry.

This article will describe the beneficial end-use markets that made up that system in 2015 and place them in historical context. Rubber Manufacturers Association (RMA) statistics dating back to 1990 allow us to see the growth and maturing of the U.S. industry through ups and downs in the economy. Having reviewed all available state data and surveyed processors, RMA can describe overall scrap tire flows with a high degree of confidence. Analysis of available information also allows us to better understand the threats and opportunities for the U.S. scrap tire management system.

Scrap tires not delivered into a beneficial end-use market may be landfilled in some states. The total beneficial end-use markets plus landfilled constitutes the percent managed. In 2015, just over 10 percent of tires generated in the U.S. went to landfill, and the total percent managed was 99.1 percent. This was a reduction compared with 2013 when generation was lower and the management rate exceeded 100 percent, probably due to stockpile abatement.

No estimate of leakage from the management system is made at this time. Unfortunately, some scrap tires are illegally dumped and although clean-ups can address this, the more proactive approach is to have strong management systems and strong enforcement of state regulations that close off leakage.

Checking in on a wide array of markets

The development of markets for recovered tire material has been a critical factor in the growth of beneficial end-use rates. For many recycled materials, markets are “supply limited”– aluminum recyclers, for instance, can recycle every UBC they get, but they are limited by insufficient collection and subsequent sorting requirements. Scrap tire markets, on the other hand, are “demand limited.” As more markets open up, more scrap tires can be beneficially used. Since more scrap tires are generated than the market size, the remainder must be managed – the repository of last resort is landfill.

So what are the markets currently available, and how have they evolved?

Three major beneficial end-use markets consume tire derived fuel (TDF) in the form of whole tires or, more commonly, 2-inch chips. They are cement kilns, pulp and paper mills, and utility boilers. Overall, TDF consumed roughly 1922 kilotons of tires in 2015, a 9.3 percent reduction from 2013 – one of the key factors for this was the mid-2013 closure of the last tire-to-energy facility making electricity directly from whole tires. Still, in 2015 the TDF market consumed 48.6 percent of annual scrap tire generation. The beneficial end-use market share for TDF has hovered around 50 percent for the last decade or more.

A total of 41 cement kilns were active consuming scrap tires at the end of 2015, and the trend in the industry seems to be toward fewer, larger cement kilns using larger volumes of TDF. Meanwhile, 23 pulp and paper mills were consuming scrap tires at the end of 2015. Since 2013, one paper facility entered the beneficial end-use market, though several large users reduced their consumption significantly. Low-priced natural gas has been challenging the economics of TDF. 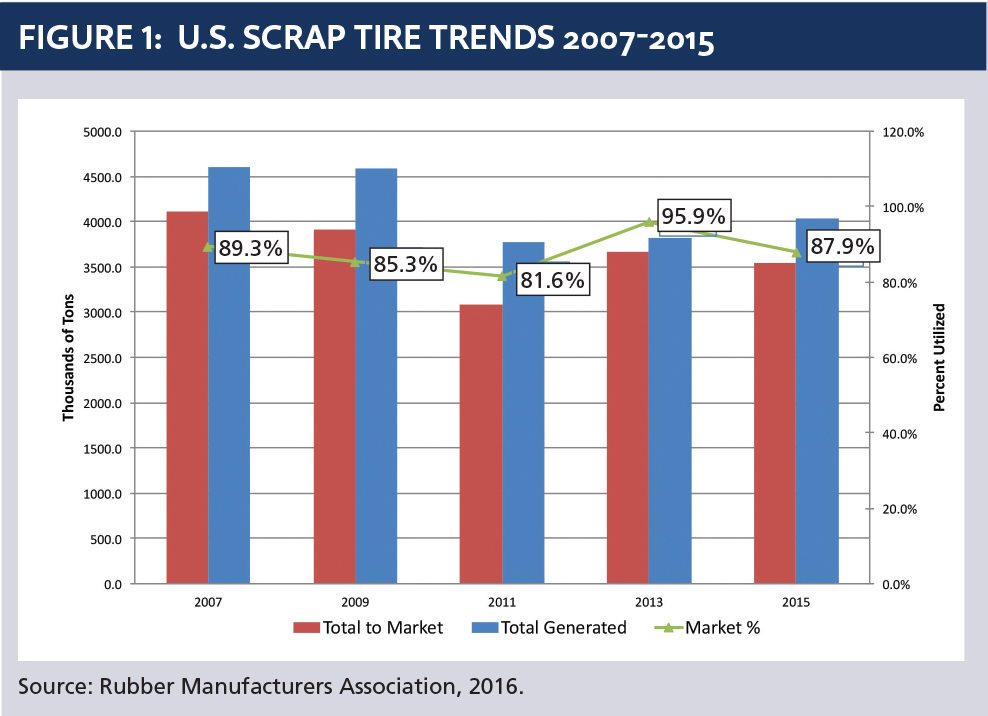 Shifts in the ground rubber market

Molded and extruded products consumed 357 kilotons of tires in 2015, making up about a third of the overall ground rubber beneficial end-use market. The market is reported as up 10 percent since 2013, though that may be a bit of an overstatement.

Synthetic turf applications, meanwhile, consumed 255 kilotons of tires. This equated to 25 percent of the overall, ground rubber market, and the segment has a solid 2015 in spite of negative press relating to alleged health concerns. It was reported as increasing 33 percent from 2013 – this too could be an overstatement.

Mulch and playground applications consumed about 225 kilotons of tires in 2015. This market consumes about 22 percent of the scrap tires moving to ground rubber. While it was reported as down 25 percent since 2013, many processors say the market is up.

Operations recycling old tires into new ones represent just a small piece of the overall ground rubber market. This market is restricted by the vulcanized and mixed condition of ground tire rubber. Because it’s vulcanized, the rubber molecules are permanently crosslinked and cannot be economically broken down into original materials. This is similar to a cake that gets baked – at that point, it can’t be easily separated back into its original materials. Nevertheless, this is a high-value market which could grow in the future.

Finally, export of crumb rubber for use in pigments, coatings and other manufacture is another high-value but small market for finely ground crumb rubber. This market also could grow in the future.

This analysis excludes the import of ground rubber into the U.S. from Canada. Canadian scrap tire programs sometimes subsidize ground rubber producers. This facilitates exports, which correspondingly reduce the volume of U.S. scrap tires going to the ground rubber market.

A handful of other applications also take in recovered tires.

Civil engineering beneficial end-use markets use scrap tires in construction projects for their valuable engineering properties such as light weight, drainage capabilities, and elasticity. This category also includes alternative daily cover uses at landfills. In 2015, civil engineering made up 7.8 percent of the overall beneficial end-use market. This was a significant increase over 2013, and with state encouragement seen of late in Colorado, California and other geographic areas, further growth is anticipated.

Seven electric arc furnace facilities were identified as using tire derived fuel in 2015. Volume estimates were tough to come by and the apparent 60 percent reduction in scrap tire consumption in this area may be more a reflection of weak reporting than actual reduction in use. In 2013, an estimated 65,000 tons of tire material were consumed while the estimate for 2015 is only 26,000 tons. 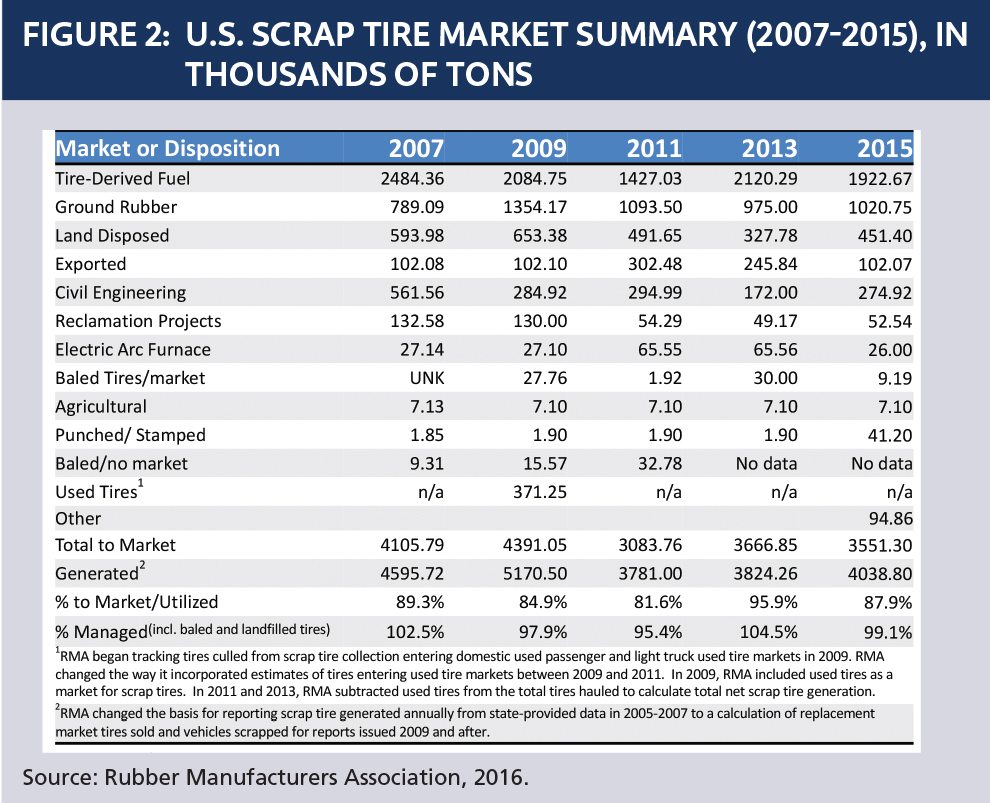 This market has been challenged in the past by proprietary technology and patents interfering with widespread adoption of a proven beneficial end-use market.

Landfilling scrap tires is not a beneficial end-use market but does help prevent the disposed material from causing harm to the environment. In 2015, approximately 451 kilotons of scrap tires were disposed in landfills or monofills, accounting for about 27.5 million mixed tires. While this disposed material will not cause the same problems stockpiling might – blight on the landscape, fires or mosquito-borne disease – it does consume valuable landfill space and discards the remaining value in the tire material. The primary causes for landfilling are lack of local markets for scrap tires, low volumes, and high transportation costs. Forty states prohibit landfilling of whole tires, and 12 states ban disposal of tire pieces. Nevertheless, even where banned, scrap tires can leak into landfills covered by trash, or as auto shredder fluff from vehicle recycling.

Landfilling of scrap tires increased by almost 33 percent from 2013 to 2015, and roughly 10 percent of all U.S. scrap tires now head down this route. 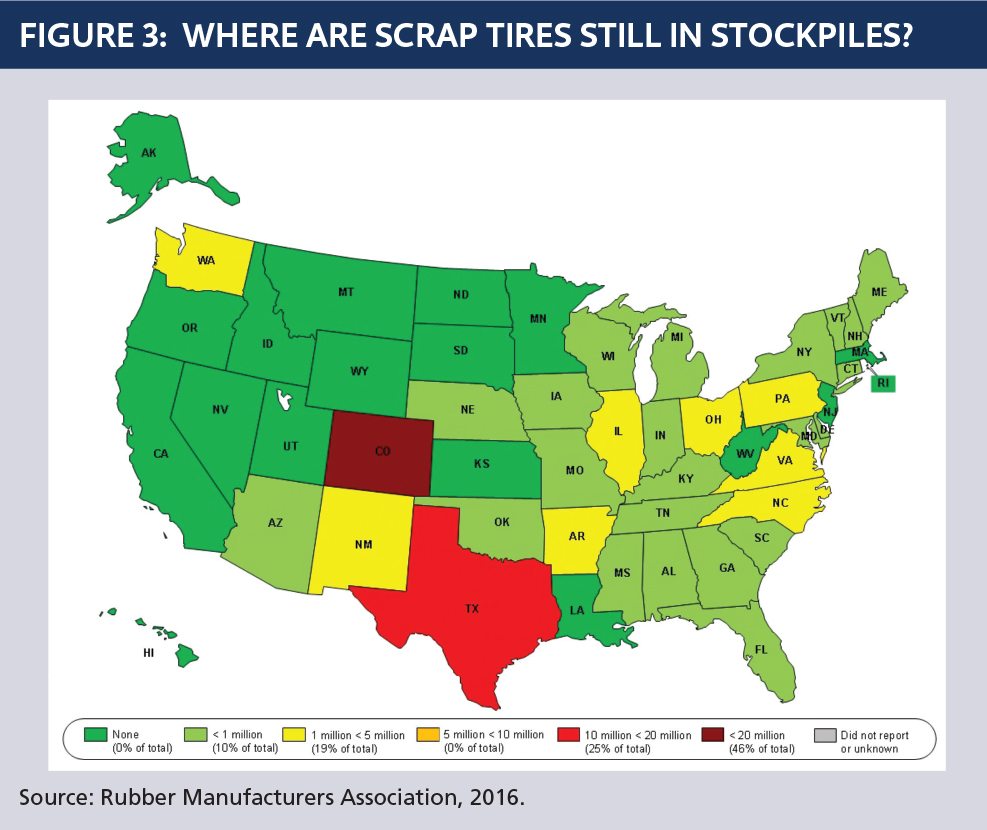 Continued state progress on stockpile abatement reduced the known number of tires in stockpiles to around 67 million. This reduction of 8 million tires since 2013 is even more notable when considering that the two states with the most piles had limited reductions. Colorado has monofills with an estimated 31 million tires that may require future abatement, though they are under the purview of Colorado’s 2014 program. While Colorado has addressed some small and midsized stockpiles, the major monofills remain. In contrast, Texas has at least 17 million tires in numerous stockpiles spread throughout the state with no program to address them. Excluding the special case of Colorado, the rest of the country combined has about as many scrap tires in stockpiles as Texas.

The amount of tires in stockpile situations has reduced over 93 percent since 1990, when over 1 billion were identified. This is a major environmental success story, and while more work remains to be done addressing remaining stockpiles and miscellaneous small scale illegal dumping, most states can be justifiably proud of their records to abate these fire and disease risks, particularly in light of emerging disease risks like the Zika virus.

Note that this reckoning does not include any factor for stockpiles that are not reported, or are unknown at this time. Typically, there are more stockpiles in a state than officials are aware of. Therefore, consistent with our methodology, the stockpile number is probably a lower limit. Further, there is uncertainty in stockpile size estimation that can tend to underestimate the actual size.

No major beneficial end-use market for scrap tires is free of challenges. Synthetic turf applications were threatened by negative press in 2015 but paradoxically got through the year with an increase in beneficial end-use market size. This year may not be so favorable, however, in part because synthetic turf fields have a long lead time to purchase and install so effects of the negative press may only now be showing.

All management decisions must be made weighing a host of different factors. In the abstract, TDF has air emissions, civil engineering applications or any land-based use can lead to leaching, and some ground rubber uses could expose people to synthetic chemicals. Are these effects objectionable? Or are they below objectionable levels? We cannot compare alternatives to a hypothetical zero effect but rather can only compare among alternatives. The “no action” alternative has effects of its own. Selecting alternatives with low impacts and high benefits based on scientific analysis across the product life cycle appears optimal.

On the other hand, opportunities abound for creative, innovative recycling and beneficial use of scrap tires. The natural latex content of TDF (24 percent) is recognized in greenhouse gas regulation as carbon neutral and scrap tires burn hotter and cleaner than coal. There is room for a TDF niche in the U.S. energy future. Electric arc furnace beneficial end-use markets could pick up, and civil engineering beneficial end-use markets may grow with state leadership and growing expertise from key processors.

The RMA is committed to 100 percent beneficial end use for scrap tires, with zero stockpiles or illegal dumping. The progress since the 1990s is significant, but there is more work to do.

John Sheerin is director of end-of-life tire programs at the Rubber Manufacturers Association. He can be contacted at [email protected]