This story originally appeared in the October 2016 issue of Resource Recycling. 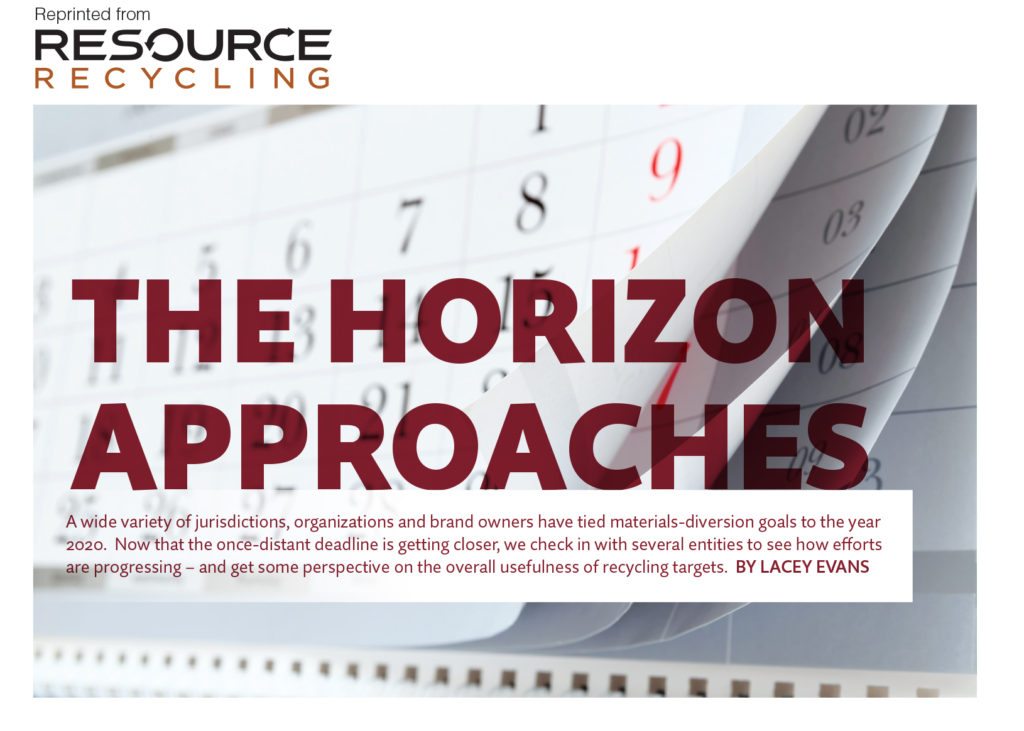 How do we ensure forward progress when it comes to recycling? How do cities and companies successfully inform residents and partners they are on the right track?
For many, part of the answer is goal-setting, and over the course of the last two decades many recycling targets have been tied to the year 2020. That nice, round date seemed far off when many of these goals were established. But now the dawn of the next decade is seemingly around the corner, and that means the day of reckoning is coming soon for a variety of programs.

The 2020 goals that have been officially pronounced are as varied as the municipalities and companies setting them. San Francisco wants zero waste by 2020. London would be happy with a 50 percent recycling rate. Massachusetts wants to reduce disposal by 30 percent, while Florida is aiming for a 75 percent recycling rate.

An analysis of 2020 industry goals shows that targets vary widely, and companies and communities are using a range of methodologies to calculate their numbers. At the same time, stakeholders are trying to reconcile counting methods that stay constant with a materials stream that’s forever shifting. Some industry veterans, meanwhile, note that setting rigid goals misses the point altogether.

Clearly, going for goals is a complex process, but it’s a topic that will be increasingly prevalent for many over the coming months and years.

Declines in the Golden State

The state of California is aiming big. It wants a 75 percent recycling, composting and source reduction rate by 2020. That means in the next four years, a total of about 22 million tons of additional material will need to be reduced or diverted. Broken down further, it means each person in California will have to reduce what they throw in the garbage by more than four pounds each day.

In recent years, California’s rate remained steady at around 50 percent. However, the most recent statistics show it has dropped to 47 percent.

Mark Oldfield, communications director for the California Department of Resources Recycling and Recovery (CalRecycle), said the decline has to do with the state’s improving economy: People are buying more goods, and they’re not necessarily recycling the old materials.

Moving organics and food waste out of landfills is one of the state’s top priorities. Out of the 33 million tons of waste disposed of in California in 2015, around a third of that was compostable organics, according to Oldfield. A law that went into effect this year requires businesses and various other commercial entities to compost.

“It will take time to see the benefits,” said Oldfield.

Another example of 2020 goals from the West can be seen in the City of Tempe, Ariz., which is aiming to divert/recycle (Tempe uses those terms interchangeably) 25 percent of discards community-wide. Like California, it is focusing in part on organics and has launched a pilot composting program, although it only accepts yard debris, not food. Three times a year, the City asks residents to separate leaves and uprooted weeds from their bulky waste, and it is composted locally. The pilot program has collected 3,000 tons per year.

Steven Pietrzykowsky, Tempe’s solid waste manager, said the City is working with the state to get the proper permits to make the pilot a permanent program. He knows the municipality will need infrastructure improvements to make that happen, mostly heavy equipment.
“Whether it’s a concrete pad, whether there’s certain types of air flow that’s needed in that type of process, we’re looking at what equipment is needed in terms of grinders, trommel screens, windrow turners, front-end loaders, things of that nature,” said Pietrzykowsky.

Oldfield also admits California needs more infrastructure to achieve its goals. That requires funding, which itself is complicated by recovery efforts.

“[The] disposal-related functions of our agency are funded by tip fees, by landfills,” Oldfield explained. “So if you’re pulling more and more materials out of landfills, that means the funding for our oversight, our program, goes down.”

The state, just like materials recovery facilities (MRFs) and processors, is also a victim of down markets. People can recycle all they want, but if a MRF can’t make money from commodity sales, there is a risk those materials will stop being collected.

“If we can build a better infrastructure here in California so that we are reusing more of those materials right here, we do somewhat inoculate ourselves from these global commodities upswings and downswings,” Oldfield said, “because we’re creating demand right here in the state.”

‘It has to make fiscal sense’

One thing that’s true of many 2020 goals is that there are no direct consequences from coming up short.

Oldfield noted the California 75 percent number is an “aspirational target” and “not a mandate.” But he also pointed out there are laws that have been passed by the state legislature that are tied to the goal. One is the 2014 Mandatory Commercial Recycling law, which, similar to the recently implemented organics law, requires businesses and commercial entities to provide recycling services. Oldfield, however, said mandates themselves aren’t enough to hit the goal. 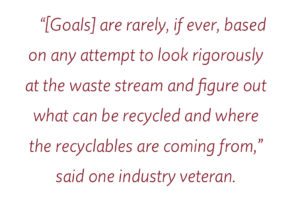 Tempe’s Pietrzykowsky said nothing is mandated in relation to the city’s diversion goal, but he also said that fact actually creates challenges. Without the teeth of a hard mandate, municipal decision-makers have no direct incentive to put extra resources toward recycling.

“Everything we do is proactive and really it has to make fiscal sense,” he said.

Tempe’s diversion programs are funded only by fees charged to customers. They are not bolstered by any outside assistance from the city or the state, which means fiscal sustainability is a challenge. “Any programs we do we have to be able to sustain that financially within the current rate,” Pietrzykowsky said.

Set in 2015, Tempe’s 25 percent overall goal has several individual targets baked into it. The municipality has a 40 percent recycling/diversion rate goal for single-family homes, a 9 percent target for the multi-family realm and a 25 percent objective within the commercial industry.

Currently, the overall rate is 13 percent, and the residential segment is at 23 percent.
Tempe evaluates and analyzes the goal and related programs on a quarterly basis and reports up the chain of command. Pietrzykowsky said his department analyzes all the programs and gives leaders options, which include possible program changes. He characterized the goal as flexible.

That adjust-as-needed approach may seem to go against the very idea of setting a target in the first place, but Chaz Miller, director of policy and advocacy at the National Waste & Recycling Association (NWRA), said overly rigid goals can be problematic.

“[Goals] are rarely, if ever, based on any attempt to look rigorously at the waste stream and figure out what can be recycled and where the recyclables are coming from,” said Miller.

Miller cited Seattle as a city with a very steady and consistent approach to its goal, which is to divert 70 percent of its waste to recycling and composting by 2022. The City is required to update the plan at least every five years. Seattle officials also review progress annually, and if recycling progress isn’t being made, the City will get to the root of the issue. Miller said that approach enabled Seattle to hit a 57 percent recycling rate in 2014.

Miller also said he would like to see more realistic recycling goals and singled out “zero waste” language.

“Zero waste in itself by a local government is unattainable,” said Miller, though he did note the concept is plausible in a commercial environment. “A factory manager controls what comes into the factory. Mayors can’t control what their residents buy.”

But mayors and other leaders can help control what is recycled. In 2015, for example, the City of Vancouver, Wash. partnered with the American Chemistry Council’s Flexible Film Recycling Group to increase recovery of plastic bags and other polyethylene (PE) film.

The Beyond Bag campaign focused on increasing the availability of drop-off locations as well as increasing awareness of how and where the bags could be recycled. It was tied to the Flexible Film Recycling Group’s goal of recycling 2 billion pounds of PE film packaging annually by 2020.

Keith Christman, the managing director of plastic markets for ACC, said in one year the Vancouver effort doubled the amount of material going back to the grocery stores and also decreased contamination in curbside recycling carts by over 70 percent.

“It reduced the amount of film in those MRFs and increased the material going back to the grocery store,” Christman said.

The Flexible Film Recycling Group’s 2 billion-pound goal is not far out of reach – in 2014, 1.7 billion pounds were recovered. Christman said outreach will be the key to getting the rest of the way there.

“The thing that is lacking is this knowledge of people’s ability to bring it back to the stores and get it recycled and give it a new life,” he said.

Something else to consider when examining recycling goals is how they are defined and calculated.

Tempe measures its goal by weight, dividing the tonnage of what is diverted by the tonnage collected. However, Pietrzykowsky said flexible packaging, lighter water bottles and other “evolving ton” factors could force leaders to consider a different way of quantifying progress.

“I think measuring a diversion rate off of a waste generation rate in terms of amount of waste generated per capita per day may be a more accurate way to measure our diversion, and it may drive us to recalibrate our diversion goals,” said Pietrzykowsky. “But right now we’re measuring it by weight, and we think that’s fairly accurate.”

What qualifies as diversion is also an important point to note. For example, Florida is trying to reach a 75 percent recycling rate by 2020, and according to state documents, it is currently at 54 percent. But that number includes tonnages that go to waste-to-energy.

The state of California does not count waste-to-energy when calculating its rate, nor does it count material used as alternative daily cover at landfills, Oldfield said.

Pietrzykowsky has lots of experience in the municipal solid waste industry. He said he often hears questions like this: “San Francisco is touting a 75 percent diversion rate, why can’t we?” His answer is never simple.

NWRA’s Miller added that cities or states that have set aspirational goals “should rethink and base it on science, base it on facts, base it on reality.”

So should cities rethink their goals? Be more flexible? Panic and throw everything out the window? It’s probably not necessary to go that far, but well-meaning local governments owe it to themselves and their residents to set realistic goals and avoid unfair comparisons.

The takeaway from this might be some advice from Miller, who wishes cities good luck and tells them to just be patient.