Another type of residue

This story originally appeared in the July 2016 issue of Resource Recycling. 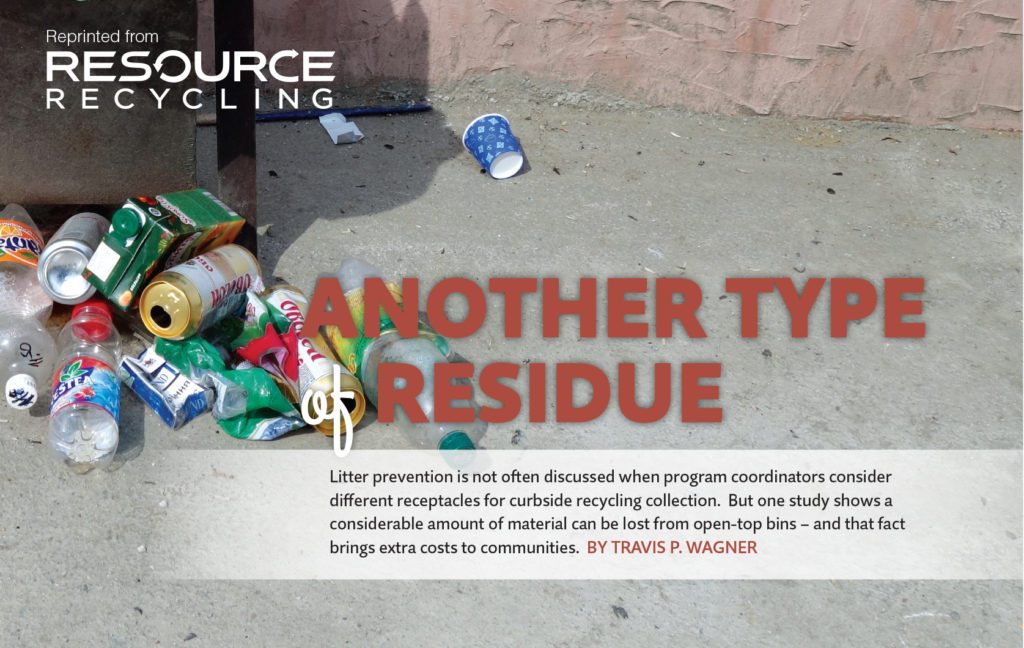 According to the U.S. Environmental Protection Agency, more than 9,800 residential curbside collection programs for recyclables are in place in the U.S., and together they serve 73 percent of the U.S. population. Curbside collection of recyclables brings convenience to residents and more waste diversion to communities, but what type of collection container is best to feed the needs of stakeholders? There are many container variables, including color, style, size, lids, RFID technology, labels and level of convenience – all of these factors can influence the effectiveness and costs of programs. And most of those factors have been studied and analyzed extensively.

The one factor that does not always receive consideration is the degree to which a container will contribute to (or prevent) curbside litter. This issue is particularly relevant to small open-top recycling bins. While many communities have transitioned to large lidded carts in recent years, the 18-gallon bin remains a regular on many curbsides.

A 2013 study by the author and Gordon W.S. Lane found that, of 782 responding municipalities, 178 (with a combined population of 17.2 million) used open-top bins with capacities of 18 gallons or less in their curbside programs. Given the low cost of these containers, one can understand their popularity.

However, a recent study on the amount of litter that is generated from these bins shows that their inability to control loose debris brings a different kind of cost to towns and cities. It comes in the wages paid to litter collectors, in extra tip fees paid to dispose of collected material and in the overall decline in aesthetics and property values that communities experience when litter is not prevented in the first place.

Blowing in the wind

How do small open-top recycling bins cause litter in the first place? The lack of a lid is the obvious answer, but the issue is actually more complex. While the lack of a lid allows the contents to be exposed to the elements, the small volume capacity invites overflow of materials. When bins are filled to the brim (or beyond), the materials can become litter due to three major factors: wind, collection spillage and scavenging. 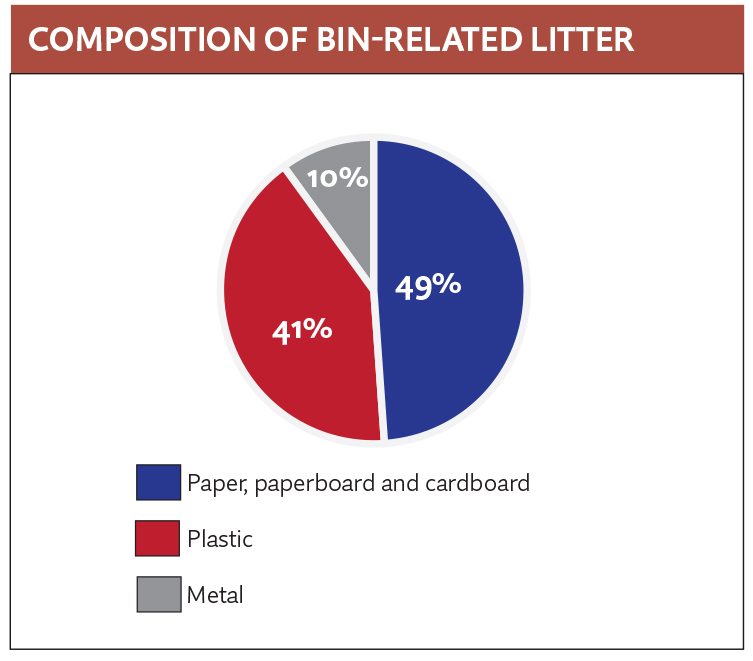 When it comes to wind, the possibility for litter becomes greater the longer material sits at the curb. A study done in the Canadian province of Alberta in the 1980s found that a 10-to-15 mph wind gust can blow a lightly crumpled piece of paper 20 feet and a 50 mph gust can carry it 120 feet.

It is not just prevailing winds; passing traffic creates gusts as well. Wind that encounters ground-level obstructions can cause a sudden horizontal and/or vertical shift, creating curbside turbulence or eddies. The resulting turbulence is all that is needed to send material into the street, especially if the bins are overflowing.

This threat has heightened as more plastics have come into the stream and packaging of all kinds have gone through lightweighting. Also interesting to note is the fact that single-stream collection of recyclables means materials can be placed loosely into the bins, which causes the contents to be less secure and more susceptible to wind compared with dual-stream collection.

Another concern is that during the collection process, material can spill as a container is handled, dumped and then placed or tossed back to the curb. Residents can also spill materials as they carry their bin to the curb. Although spillage is primarily a function of overflow, the collection process itself can be a cause. For example, in Portland, Maine, a task-based incentive system is used: Workers are paid for a full shift regardless of when their collection routes are completed. This system can entice workers to collect materials as quickly as possible, and they’ll toss bins back to the curb to save time. That action, however, can result in spillage and the dislodging of stuck wet or compacted materials.

Finally, scavenging also is a likely cause of litter, but little data exists on this factor. Scavenging of curbside bins is common in bottle-bill states, where individuals will sort through curbside receptacles to find containers that can be redeemed. Given that the standard 18-gallon bin has a wide opening but no lid, they become inviting targets. But scavenging can result in a mess of materials being knocked onto the ground. Animals are known to scavenge trash and recycling, though with recyclables, critter-curiosity occurs only if materials are contaminated with food waste.

To determine the amount and cost of litter created by small, open-top recycling bins, a study was conducted in the summer of 2015 in Portland, Maine. The City uses primarily 18-gallon, open-top bins, which were distributed free when the curbside recycling program was first started. Portland offers free single-stream curbside collection of recycling and collects fiber, metal, and plastics Nos. 1-7. A pay-as-you-throw program structure is also in place – residents are required to purchase specific trash bags for garbage, a policy that aims to push residents toward minimizing their waste generation. The current residential recycling rate in Portland is 35.8 percent. 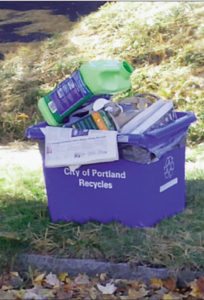 A recent study in Portland, Maine found 15.2 percent of curbside recycling bins were overflowing each week.

The study investigated two sections of town – an urban area and a suburban area that are on separate hauling routes. The study team conducted six litter-characterization events, three for each area, over a six-week period. During each event, researchers collected, segregated, counted and weighed all fresh litter larger than 1 square inch that was attributed directly to the recycling bins. The litter all came from within 10 feet of bins.

Combining the two study areas, we found a mean of 20,590 pieces of litter generated from the recycling bins of every 1,000 households. This translated to 3.74 tons of litter per 1,000 households, per year. The team’s count is conservative because on several occasions, researchers saw and talked with individuals who picked up litter while retrieving their bins.

As shown in the figure above, fiber (paper, paperboard and cardboard) was the most common material showing up in the litter mix. Plastics (PET clamshells, bottles, and straws) were the next-highest count, and metals, predominately aluminum, made up the rest.

The research team also wanted to measure the frequency and extent of overflowing bins. The study found 26 percent of households set out multiple recycling bins on a weekly basis and 15.2 percent of all recycling bins were overflowing each week with the mean overflow volume being 66.9 percent – in other words, for those containers that were overflowing, on average, the overflow equaled approximately 12 gallons, by volume. These results mean that residents generally had more recycling than could be collected in the small bins, prompting many to use multiple receptacles that still often ended up overflowing. This phenomenon meant greater exposure of recyclables to the wind.

In many litter studies, estimated collection costs vary widely and rely on highway litter cleanup costs by volunteer organizations or highway maintenance crews based on a per-road-mile cost. Unfortunately, such data is not very helpful to municipalities trying to estimate the cost scenarios when trying to select a recycling container for residential programs.

The Portland study took the approach of calculating a per-piece cost, which would allow municipalities to better estimate their own costs. It took 54 person-hours to collect the 2,152 pieces of litter picked up during the six litter collection events. This means the average litter collector was nabbing 43.2 pieces per hour (this should also be viewed as a conservative figure – the litter was fresh and relatively concentrated as it was collected within 10 feet of the bins). The cost calculation for any municipality is straightforward. Paying the current federal minimum wage of $7.25 per hour with no benefits means a per piece cost of $0.17 (43.2 pieces per hour at $7.25 equates to 16.8 cents per piece). Of course, paying a higher wage and/or including fringe benefits would increase the per-piece cost.

The collection cost is by far the largest cost component, but it’s not the only one. When a recyclable becomes litter, it then likely becomes trash, which means lost revenues, additional disposal tipping fees and hauling charges. Litter also can increase costs for stormwater drain cleaning, and it can reduce property values and increase citizen complaints over aesthetics.

Although the capital cost of purchasing small open-top bins is very attractive when compared with the cost of larger wheeled carts, solid waste managers should consider all the likely effects. As the Portland study showed, the continuing economic impact of litter can be significant.

An additional goal of this study was to establish a baseline for a future research project to answer the question of whether volume constraints when it comes to a receptacle will mean more recyclables ending up in the trash. In the absence of empirical evidence, every indication points to the answer being “yes.”

Travis P. Wagner is a professor of environmental science and policy at the University of Southern Maine in Portland. His research focus is on solid waste management and extended producer responsibility. He can be contacted at [email protected]
The study outlined in this article was funded by a grant from the Maine Economic Improvement Fund. This article is based on a detailed study from the author and Nathan Broaddus. Their research paper was published this year in the journal Waste Management and is called “The generation and cost of litter resulting from the curbside collection of recycling.”