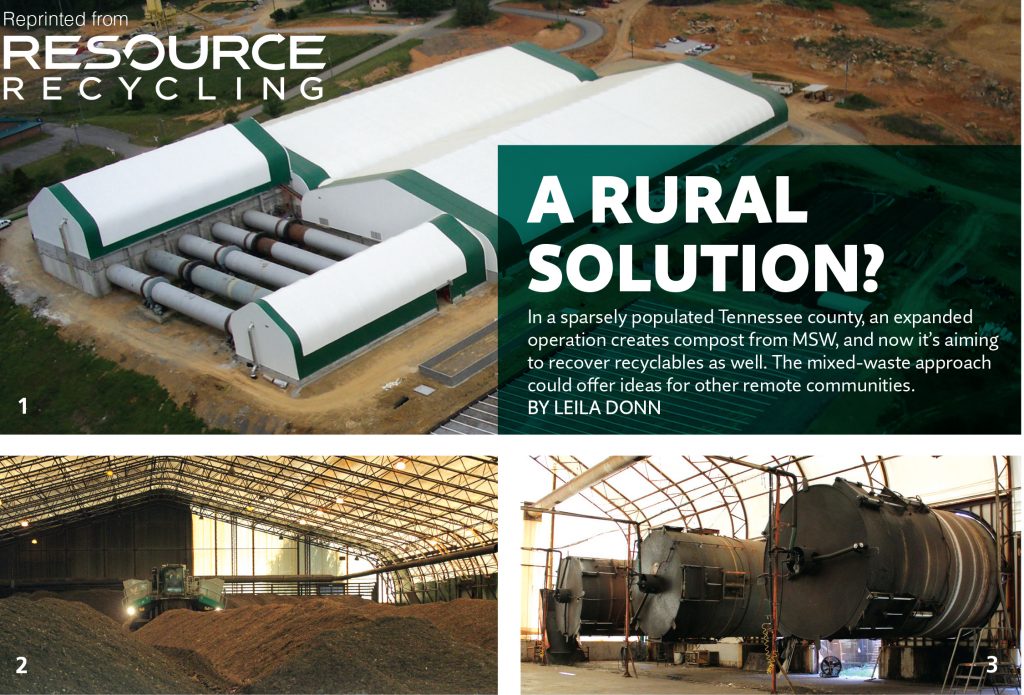 Plans to divert recoverable materials from the waste stream via mixed-waste processing have generated much industry discussion of late when they’ve been proposed in heavily populated areas such as Houston, Indianapolis and Montgomery, Ala.

But what about collecting trash and recoverable materials together in rural locales? In less-populated pockets of the country, tried-and-true collection methods like curbside recycling don’t always add up economically, and recycling officials are hungry for new solutions.

It’s notable, then, that one operation is testing mixed-waste diversion possibilities in Tennessee’s Sevier County, a mountainous area in the eastern part of the state that is home to Great Smoky Mountains National Park.

Sevier Solid Waste, Inc. (SSWI) currently receives bagged garbage from Sevier County residents, tourists, restaurants, businesses, and it uses an aerobic digester to expedite the process of composting 60 percent of the county’s municipal solid waste (MSW). Within a year, the operation aims to boost diversion further with the addition of an automated mixed-waste facility that will target a range of recyclable materials.

SSWI also plans to partner with PHG Energy to build a biomass gasification plant fueled by compost and wood waste. The plant may eventually provide the power to run both the composting and recycling processing facilities on-site.

“SSWI’s high diversion rate decreases the need for local landfill space, important in an area as scenic and highly visited as Sevier County,” said Lori Munkeboe, director of the Tennessee Department of Environment and Conservation’s Office of Sustainable Practices. “We are happy to see their facility expanding.”

As the SSWI efforts unfold, waste management officials from other rural jurisdictions will likely be watching with interest. Here is a rundown of how the facility operates today and what diversion-oriented alterations are slated for the months ahead.

Increased capacity in wake of fire

The SSWI facility was built in 1992 as a response to limitations on the lifespan of the area’s landfill and associated difficulties with securing new land for a landfill amid the county’s rugged terrain. The SSWI aerobic system currently processes all types of municipal solid waste, excluding construction and demolition debris. It operates continuously, running 24 hours a day, 365 days a year. 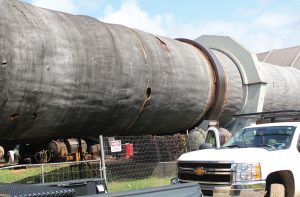 In 2007, a fire destroyed all of SSWI’s building structures, though the digesters themselves were undamaged. The facility was rebuilt in 2009 at a cost of over $10 million, which was paid for with money from insurance as well as a small state grant from the Tennessee Department of Environment and Conservation (TDEC). The original facility was smaller and was only able to process 150 tons of material per day. The new building benefits from a larger footprint and is able to process 350 tons of material per day. It is currently processing 300 tons each day. These numbers make SSWI one of the largest mixed-solid-waste compost facility in the country.

Incoming bags of garbage are combined with a small amount of compost that has already been processed and placed in rotating drums that are 185-foot long, and 14-foot wide – these are the aerobic digesters. Material remains in the digesters for about three days. Air is blown into the drums, and that air and heat generated by microorganisms together kill pathogens and speed the process of decay.

Once removed from the digesters, material is screened and placed into windrows, where it is periodically turned for about 30 days. Municipal wood waste is ground up to serve as a biofilter and to provide odor control. The material is screened again and transferred to a storage area for one to three months.

The finished Grade A compost is sold to farmers, contractors, and soil blenders, providing SSWI with revenue from the product.

Tom Leonard, general manager of SSWI, said the company has worked to create a reliable end product, even if the specifics of the incoming stream vary. “Since much of our waste stream comes from very touristy areas including Pigeon Forge and Gatlinburg, we never know how much waste we are going to get or what its composition is going to be,” he noted.

SSWI was recently awarded a TDEC Materials Management Program Composting Facility Grant that will help the company repair and maintain the digesters and other equipment – some of this machinery is over 20 years old and, of course, has gone through a fire. The $970,000 state grant required a 50 percent match from SSWI, and it’s the largest the operation has ever received.

An eye on recyclable materials

Currently, SSWI is only able to offer recycling in the county at three drop-off centers that accept commingled plastics Nos. 1-7, aluminum, steel, cardboard, newspapers and magazines. The company estimates these drop-off sites are used by 5 to 6 percent of the community. The material collected at the drop-off centers is processed by a private recycling company in a neighboring county. Meanwhile, recyclables that are included in the MSW stream and processed at SSWI’s compost facility are currently landfilled since they do not break down in the composting process.

The company says 3 million pounds of aluminum, 5.5 million pounds of steel and around 13 million pounds of plastic currently go through the facility and the digesters. SSWI staff felt an opportunity for recycling exists, and last year the firm was awarded a $300,000 grant from TDEC’s Materials Management Program for the construction of an on-site recyclables processing facility, which will aim to process all the recyclable materials that come through the compost plant.

SSWI plans to open the facility by 2017, with the help of another state grant to fund materials separation equipment.

Recyclable material will be separated from processed compost and transported to the new recovery facility. Recyclables will be shredded to 6-inch-minus before traveling up a conveyor belt through a Nihot vacuum system that will separate film from the other materials. Steel will be extracted with a cross-belt magnetic separator, aluminum will be separated by an eddy current and plastics will be separated with an optical sorter.

Metals and plastics will be washed and moved into appropriate markets, and the plastic film will be shredded and sold to a cement company for use as fuel. Having a system in place for plastic film is notable, as all material initially heads to SSWI in plastic bags.

SSWI is currently working to identify the best way to clean their materials. Because recyclables are gathered after they have been run through the digesters, they will be entering the recycling stage covered in unfinished compost.

Company officials are looking into one innovative cleaning method that would enable them to wash everything together before it is separated. Older methods of mixed washing have been shown to lack the power to adequately clean the material, which is sometimes physically blocked by large amounts of plastic film.

Even after the implementation of the new washing process, the three existing recycling drop-off centers will remain open as alternate recycling options for Sevier County residents.

SSWI has additionally partnered with PHG Energy to construct a biomass gasification plant that may provide another market for finished compost through waste-to-energy. The initiative aims to also eventually provide energy for the recycling and composting facilities.

PHG is providing $2.25 million for the project, with another $250,000 in the form of a grant awarded by TDEC’s Office of Sustainable Practices. The project is in-process and will be completed by August 2016.

SSWI produces more than enough compost for its current market. This excess compost, combined with an abundant supply of woody waste, will fuel the gasifier. Initially, the system will use a built-in thermal oxidizer to treat odorous air that is a product of the composting process. This method of odor control will use less electricity than the large fans that the current system relies on. The gasifier will eventually be used to generate the energy required to power the composting and recycling facilities on-site. In addition to generating energy, the plant will use excess material to produce a high-carbon biochar that can be sold as fuel.

“These projects are paramount to the success of the program,” said Tom Doherty, Clean Tennessee Energy Grant Program administrator. “Additionally, this project satisfies a substantial portion of the energy reduction goals for the municipality as well as for the state.”

Sevier County’s unique methods of handling MSW provide a look into one way of handling material in a rugged, mountainous – and scenic – setting.

Leila Donn works for the Tennessee Department of Environment and Conservation’s Office of Sustainable Practices, where she helps find solutions to food waste, promotes sustainability at state parks and writes about Tennessee’s sustainable projects for national and regional publications. She can be contacted at [email protected]