Single-stream recycling collection is dependent on the capabilities of materials recovery facilities to sort the incoming mass flow into categories that can be successfully marketed. And equipment innovations are a big part of the sortation effort.

Some technologies, such as optical scanners, can identify plastics and other items based on chemical composition or color. Others, such as trommel screens, rely on physical properties of material to sieve recyclables into processible fractions. And then there’s equipment that takes advantage of how specific actions affect the movement of different types of products on the line.

This last sorting strategy has helped MRFs unscramble the incoming flow into separate fiber and container processing streams for further processing. Disc screens are effective because they interact with two-dimensional fiber products differently than they do with three-dimensional recyclables such as rigid containers – fiber products “surf” over the discs, but containers fall between them. The type of separation achieved is controlled by such variables as the disc size, geometry and spacing.

Of late, another method has emerged to help operators sort 2-D materials from their 3-D counterparts. The innovation is called ballistic (or elliptical) separation, and as more types of recyclables enter single-stream programs, the technology could be key for MRFs aiming to keep pace with the programs they serve.

According to Rutger Zweers, director of sales for equipment manufacturer Stadler America, the ballistic separation idea was first developed by Germany-based Stadler as a sorting solution in Europe for recyclable and waste materials. Within the last five years, the ballistic approach has started to be adopted in North America as part of new MRFs or system upgrades. Figure 1 provides an example of a typical ballistic unit with some of its key components identified. 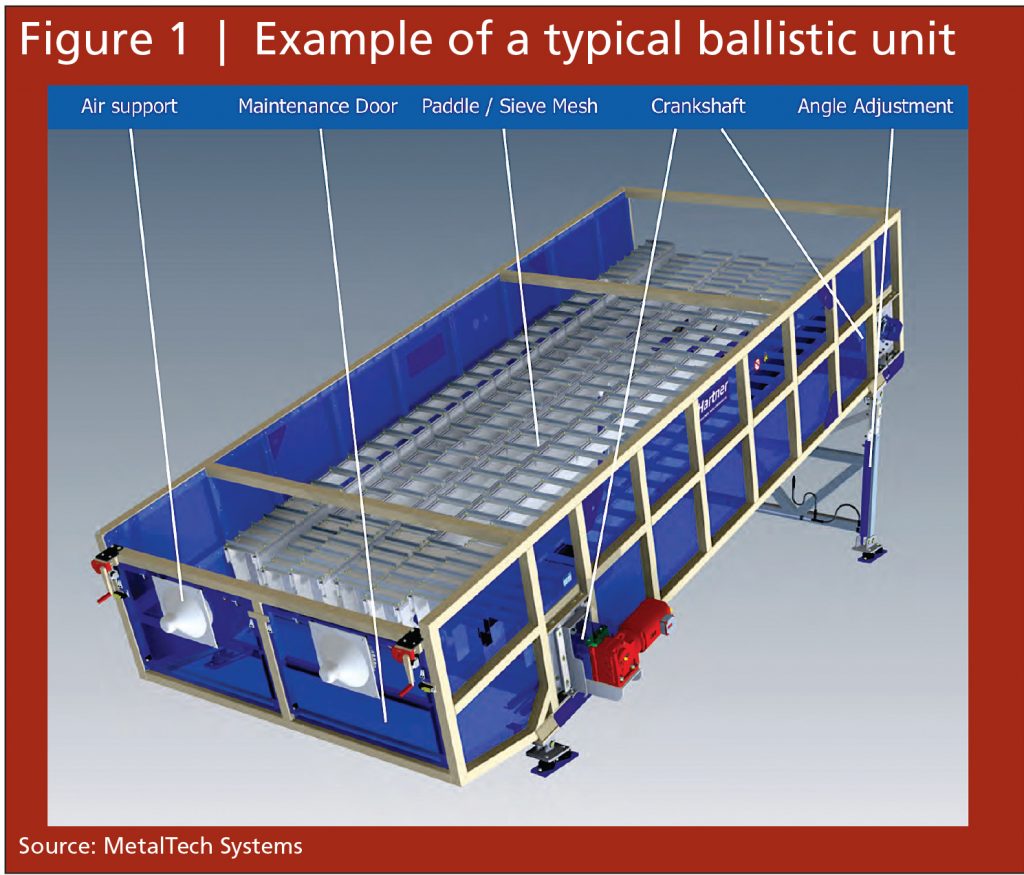 One end of the unit is elevated to create a slope that averages about 15 degrees. Material is typically metered at the lower end with the infeed positioning dictated by available spacing and manufacturer recommendations with respect to the mass flow being processed. Crankshafts then power a series of perforated vertical paddles to move in an elliptical motion so that each paddle is moving both vertically and horizontally.

Figure 2 shows what happens to a material stream after it is metered onto the deck of the machine. Flat materials move forward to the top end while 3-D products fall backwards to the lower end of the deck. At the same time, the paddle perforations allow the screening out of smaller materials. Some manufacturers also provide an option to stack one to three units in order to accommodate a higher throughput or to achieve multiple screenings based on different paddle perforations in each deck.

The technology is commonly described as one that separates separating “rounds” from “flats.” But according to Chris Hawn, North American sales manager for Machinex, a better way to understand ballistic separation is imagining materials reacting differently to the process of being bounced around. A similar perspective is provided by Richard Howard, vice president of MetalTech Systems. “One type of material (2-D) absorbs energy and the other is repelled by it,” he explains. The result is that flat and flexible 2-D materials cling to the paddles, which move those items forward. At the same time, 3-D rigids will generally bounce backwards in response to the paddles’ upward strokes.

Understanding the physics underlying ballistic sortation will help facility operators anticipate what the impact might be due to changes in the mass flow composition. New materials, such as plastic thermoforms and cartons, are being added to many municipal recycling programs due to their increasing use in various consumer product applications, but they don’t always have the classic round shape of more traditional containers. Yet MRF operators report that ballistic separation handles these recyclables like 3-D materials, directing them to the appropriate processing lines.

In Europe and other overseas operations, ballistic units are used for sorting a number of mass flows, including sorted fiber or container streams, municipal single-stream collections, mixed solid waste, and construction and demolition materials.

North American MRF veterans say one of the early uses for the technology here was the removal of 2-D material from the more valuable non-ferrous scrap being recovered from shredded automobiles. Currently, the fastest-growing market for ballistic separation is the processing of municipal source-separated recyclables, especially those recovered through single-stream collections. A few ballistic units have also been installed at mixed-waste facilities, which take in loads that have trash and recyclables mixed together. 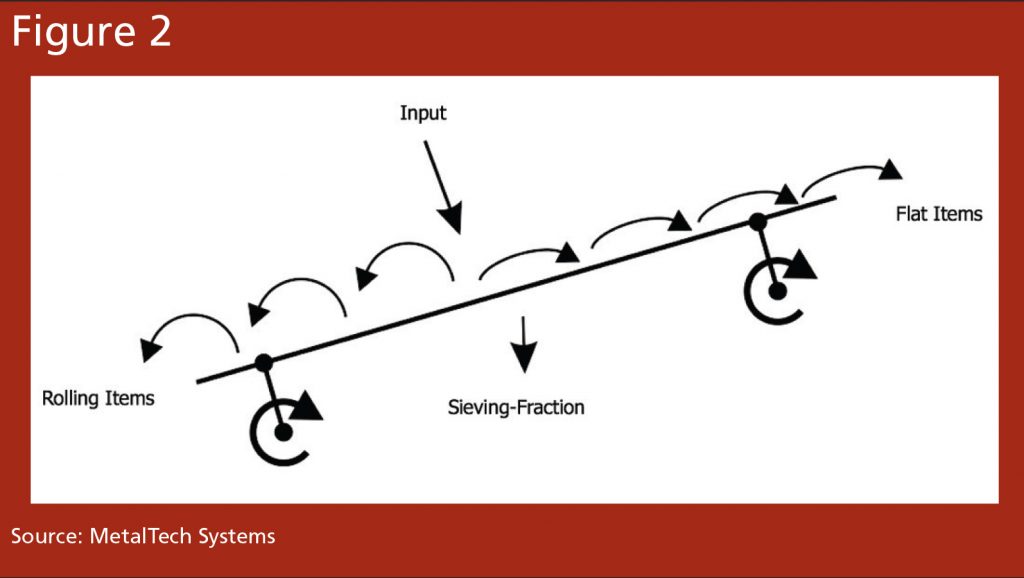 Will ballistic separation be a mainstay in the North American market? Typically, a technology gains traction when it demonstrates certain advantages with respect to costs or solving specific operating problems. The following attributes of ballistic separation show how the method is helping MRFs in one or both of those areas:

Reliable separation. A ballistic unit is currently used in a MRF operated by the quasi-governmental Rhode Island Resource Recovery Corporation MRF. Ballistic technology at the facility removes 2-D materials such as film and fiber and undersize contaminants from the plastic container stream before the plastics encounter optical sorters. Brian Dubis, operations manager, reports that even flattened PET or HDPE bottles “tend to go where they should go.” He adds, “I was surprised how clean the plastic materials came out.”

Less Maintenance. Ballistic technology “is relatively clean and easy to maintain” says Erik van Dijk, executive vice president of manufacturer Van Dyk Recycling Solutions. This is largely due to the unit design, which avoids wrapping and entanglements from film and wire-type materials. This is clearly a significant advantage.

“Even though a lot of municipalities try to persuade residents to not put bags in the system, the films and similar contaminations continue to increase,” says Hawn of Machinex. Efficient handling of film and wire wrapping results in less time lost to regular or unscheduled MRF maintenance, which in turn boosts production rates.

Safety. When a ballistic unit is shut down for maintenance, the deck becomes a solid surface that is considered safe to walk on for maintenance and occasional repairs. Says Williams, “When you climb up on it, unlike a disc screen, there aren’t a bunch of holes to fall through.”

Once MRF designers and operators determine whether ballistic solutions are appropriate additions to their facilities, they must then figure out how to apply the technology most effectively. Discussions with ballistic equipment manufacturer representatives yielded a number of key points to keep in mind.

An operator needs to first identify the ballistic machine’s role in the material-handling system as a whole. Will it be used for splitting an incoming stream into more manageable process flows such as mixed fiber and containers, or function more as a polisher for improving the market quality of a specific material stream? A complete understanding of the stream can be helpful in answering such questions. “Throughput rates are density driven,” states Zweers of Stadler America, meaning it is necessary to have reliable composition data so that the operator knows the expected ratio of 2-D to 3-D materials.

Along similar lines, it’s important to have a grasp on anticipated changes to the stream over time. This includes short-term fluctuations in quantity and composition based on seasonality factors as well as longer-term changes due to program policy changes (adding new materials to the collection mix, for example).

The next step, experts say, is refining the specifications for how the ballistic equipment will be applied. Some of these variables include:

Deck elevation. While the average elevation used for the ballistic deck is 15 degrees, this number can range, depending on the manufacturer, and may be anywhere between 12 and 25 degrees. The optimal elevation, says Zweers, is based on finding the “right balance for the separation of 2-D from 3-D.” Setting the elevation too shallow heightens the risk of 3-D material ending up headed down the 2-D path, and a deck elevation too steep has the opposite effect.

Paddle design. The paddle design serves two important functions: First, it provides the bounce needed to separate out the 3-D materials. Depending on the composition of the process stream, the “aggressiveness” of the paddle bounce can be influenced by paddle length and the use of a specific ridge design on the paddle surface. In addition, vendors point out that ballistic units used to process a glass-heavy stream should have paddles made from abrasion-resistant steel alloys. The second function of the paddles is screening out smaller materials. Typical paddle perforations are 2-inches-by-2-inches, but the perforation dimensions can be customized to achieve specific screening objectives.

Air assist. Ballistic units can be equipped with fan units at the lower end of the deck to help “push” 2-D materials up the deck. The need for air assist is ultimately determined by the composition of the stream.

The benefits of competition

The introduction of ballistic technologies into the North American recycling facility market means that operators and programs have another solution in their tool boxes as they aim to produce clean, high-quality material for buyers. It also creates a notable dynamic in the equipment marketplace, providing further pressure to manufacturers of alternative screening and sorting methods to come up with yet another level of innovation that will keep their products attractive to users on technical and economic grounds.

Hopefully, such competition is creating a race to the top and lifting all stakeholders in the recycling value chain. At the same time, innovation can help MRFs and other material handlers keep pace with the fast-evolving waste stream, or at least clearly show decision-makers where limits of material recovery currently lie.

Roger Guttentag is an industry consultant and the author of the monthly “Recycling Online” column in this publication. He can be contacted at [email protected]