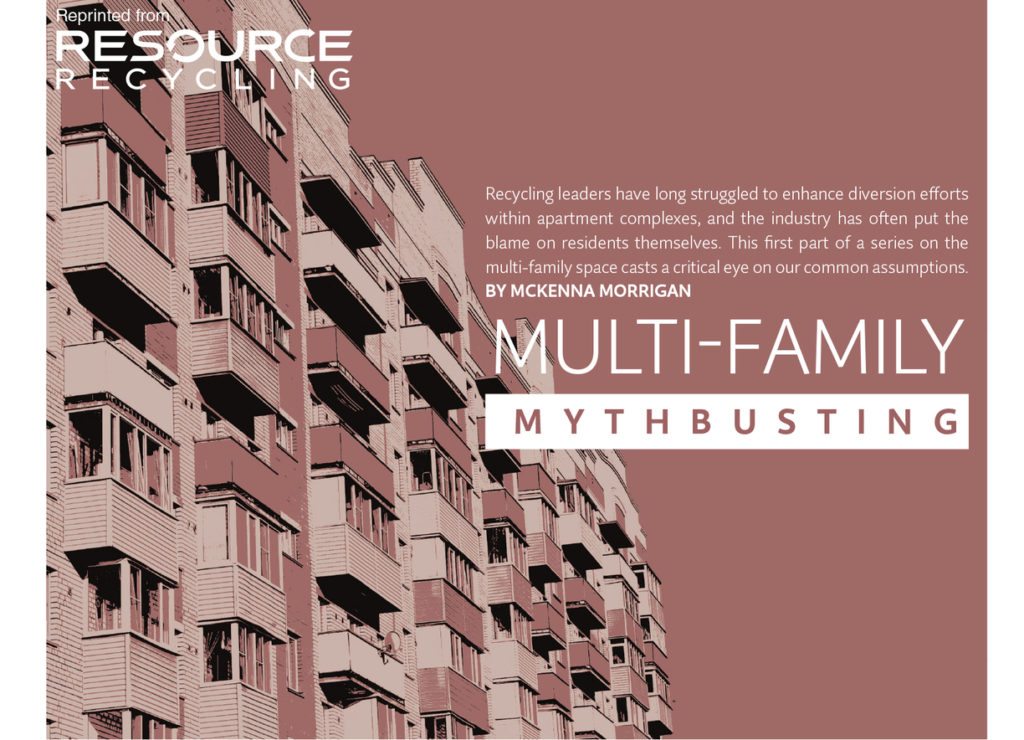 Mention “multi-family” to a room of recycling coordinators and you will probably hear groans.

Why is it that apartment dwellers seem less apt to cleanly divert materials? Are the usual explanations for the difference in outcomes really accurate? And are low multi-family recycling rates inevitable or can we boost program performance?

For local governments, recycling service providers and advocates, these questions are increasingly urgent. Nearly 20 percent of U.S. households now live in apartments and condominiums, and that number is much higher in urban areas. Achieving ambitious recycling goals and improving material quality requires us to take a deep, honest look at the multi-family sector.

This first of three articles focusing on multi-family will explore four common assertions about multi-family residents and their recycling habits – and it will show how these oft-repeated explanations fail to tell the whole story.

Although the national recycling rate may not show it, Americans generally report strong support for recycling. In multiple surveys conducted by research firm Gallup since 2000, nine in 10 Americans reported participating in recycling. In 2013, 85 percent of American adults surveyed by marketing firm DDB said they viewed recycling as important. But some in recycling circles suggest that apartment dwellers are not so enthusiastic.

Cascadia Consulting Group’s [Editor’s Note: the author is a senior associate at the firm] research in this area, however, has found that multi-family residents’ attitudes about recycling and their willingness to recycle generally mirror those of single-family residents.

As part of a pilot program conducted for Bellevue, Wash., Cascadia surveyed residents of luxury downtown apartment and condo towers. Nearly three-quarters (72 percent) of survey respondents reported that recycling was “very important” to them personally, and virtually all other respondents reported that it was “somewhat important.” This finding is in line with the general ethos of residents in a region with a long history of support for recycling.

Another study illustrated it’s not just wealthy Seattle-area multi-family dwellers who seem to care about recycling correctly. Washington’s Kitsap County is home to Naval Base Kitsap, the third-largest naval base in the country, which draws thousands of service personnel and their families to the area. Apartment buildings in this area experience high turnover, and many residents arrive from parts of the country not typically associated with recycling fervor. Still, in a Cascadia pilot project for Kitsap County, 83 percent of apartment residents surveyed said that recycling was “very important” or “somewhat important” to them personally. Two-thirds of residents reported recycling either “most items I know are recyclable” or “everything I can.” On-site audits of garbage and recycling containers at Kitsap apartments backed up residents’ claims: Recycling containers were brimming with recyclable material and had relatively low levels of contamination.

The bottom line: If most multi-family residents already say they do care about recycling, simply telling them about the benefits of recycling is unlikely to yield results.

Some recycling professionals suggest that multi-family rates are low simply because residents do not know the specifics of how to recycle in their buildings, or because they are confused about what can go in the bin.

Our research, however, suggests that recycling knowledge can be as high among multi-family residents as it is among single-family residents. Since 2013, Cascadia has quizzed more than 1,800 apartment dwellers in three western Washington counties about recycling. When asked where to place items discarded at home, more than 85 percent of residents correctly identified common materials that belong in the recycling bin: cardboard boxes, newspapers, metal beverage and food cans, plastic bottles, glass food and beverage containers, envelopes and junk mail.

Apartment and condo dwellers do not live in a vacuum. They work and play in the same places as single-family folks, so all are likely encountering the same away-from-home recycling programs, receptacles, signs and promotional campaigns. Many multi-family residents have lived in single-family homes at some point in their lives and have experienced recycling in that environment.

At the same time, multi-family residents rarely receive the kind of regular recycling education and information that single-family residents do. Often, multi-family properties are treated as commercial properties and are not included in municipally provided residential recycling programs. In this context, property managers are treated as the customer and little, if any, effort is made by municipalities and service providers to engage residents directly. Educational materials for residents, if created at all, are given to property managers for distribution, a strategy that our research has shown to be highly unreliable for actually reaching residents.

The bottom line: Many multi-family residents already know what and how to recycle, and they deserve the same level of regular and direct recycling communication that single-family residents receive.

Another common explanation attributes low multi-family recycling rates to the demographics of apartment residents, who – according to the National Multifamily Housing Council – tend to be younger, have lower incomes, and are more likely to be Hispanic than the average U.S. household. According to this explanation, even if apartment residents support the idea of recycling, the daily stresses of life for these households, limited English proficiency, or different cultural norms in the home get in the way of actual recycling participation. However, many studies over the years have demonstrated that demographic variables are not reliable predictors of recycling behavior.

An English-only campaign designed for single-family households is of course not going to achieve stellar results if it’s simply transferred to a diverse multi-family population. Nor will translating your existing educational materials into additional languages. On the contrary, it is important to recognize and adapt your program to address the diverse backgrounds and perspectives of multi-family residents. Taking well-planned steps to tailor a multi-family campaign to the needs and specifics of a given population is a far cry from simply writing off a group of residents as impossible to influence.

Toronto’s program exemplifies a successful recycling campaign for a wide-ranging group of multi-family residents. In this ethnically diverse city of 2.6 million residents, over half are immigrants (51 percent), more than a quarter speak a language other than English or French at home (28 percent), and nearly half of all residents live in multi-family buildings (47 percent), according to Canada’s national statistical agency. Since 2008, Toronto’s Solid Waste Management Services has invested in a multi-pronged strategy to increase multi-family recycling, and the outreach acknowledges and embraces residents’ diversity.

For example, Toronto’s 3Rs Ambassadors program enlists apartment residents to champion recycling and waste reduction with neighbors in their own buildings, sparking enthusiasm for recycling across linguistic and cultural boundaries. Toronto has doubled its multi-family diversion rate in the past seven years – from 13 percent in 2007 to 26 percent in 2014 – clearly demonstrating that progress in the multi-family sector is possible, regardless of resident demographics. Toronto will continue working to increase this rate and is rolling out organics collection in apartments to achieve greater diversion.

Effectively engaging diverse populations demands that most recycling programs stretch beyond their traditional approaches, making time to understand residents’ backgrounds, views and behaviors, and undertaking multilingual outreach and education efforts that align with cultural norms and values. A later article in this series will further discuss how to adopt this type of approach.

The bottom line: Residents at all income levels, across languages and from all cultural backgrounds can be enthusiastic recycling participants if effectively engaged using culturally competent program design.

Myth 4: Multi-family residents are just too lazy to recycle right

When other explanations are exhausted, some recycling advocates resort to the argument that multi-family shortfalls can be chocked up to plain old laziness on the part of residents.

While it is certainly true that apartment recycling often requires more effort than recycling in a single-family setting, our experience indicates the barriers to resident participation are much more complex than the simple matter of convenience. Most apartments we visit lack basic recycling infrastructure: Recycling containers are poorly marked (if at all), are located far from garbage containers and are too small to hold all of the materials generated by residents between collection days. Paradoxically, insufficient garbage capacity is also a common problem at apartments that can interfere with recycling – if garbage containers are full before collection day, residents have nowhere but recycling containers to put their garbage, contaminating the properly diverted materials. In addition, residents often report lacking a dedicated container or bag in which to collect recyclables within individual apartments and to use to transport materials to central collection areas. In short, residents aren’t being lazy – they simply don’t have a reliable system to participate in.

Addressing these barriers and providing a supportive recycling infrastructure can lead to dramatic improvements. For example, residents at properties that took part in a recent Kitsap County pilot project typically filled up their recycling containers with well-sorted materials long before collection day. By adding more collection capacity in combination with door-to-door resident outreach and distribution of tote bags, participating properties nearly tripled the amount of recycling collected. Specifically, weekly recycling volumes increased from an average of 6 gallons to 16 gallons per apartment, with minimal change in contamination.

In a project in Bellevue, meanwhile, the residents in high-rise apartment and condo buildings who have supportive recycling infrastructure and sufficient collection capacity divert nearly half (47 percent) of all waste generated, by weight.
These are not isolated cases. In pilot projects across three western Washington counties – covering dozens of properties and a wide range of resident demographics – recycling rates at properties that improved their recycling infrastructure increased between 40 percent and 130 percent (by volume) over baseline levels.

The bottom line: Ensuring that apartment dwellers have access to the basic recycling infrastructure essential for successful participation is a necessary first step in improving multi-family recycling rates.

It is indisputable that multi-family recycling rates currently lag behind single-family rates in virtually every community in the country. But our commonly accepted explanations contain more myth than truth, preventing recycling programs from addressing the real barriers and drivers that affect multi-family recycling rates. The good news is that there are straightforward and affordable actions that any community can take to identify and address the real barriers, dramatically improving the quantity and quality of recyclables collected from multi-family buildings.

Want to know how you can take action and see results in your community? Stay tuned. The second part of this series will outline five best practices for boosting multi-family recycling.

McKenna Morrigan is a senior associate at Cascadia Consulting Group in Seattle, where she specializes in recycling and materials management policy, program design, research and analysis. She can be contacted at [email protected]