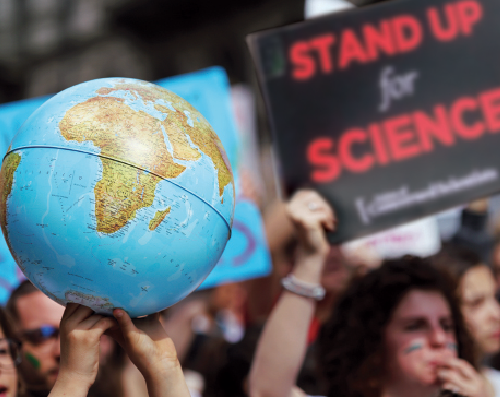 Take, for example, the global climate strike that took place Sept. 20. Huge numbers took to the streets in the student-led demonstrations – estimates put participation between 4 million and 7.6 million worldwide – in a push for meaningful action around reductions in greenhouse gas emissions.

Of course, the events of Sept. 20 themselves will not immediately transform our ability to tackle one of the most challenging problems to ever confront human beings. In September, the Washington Post and Kaiser Family Foundation released results from a national poll that showed that 76% of U.S. adults view climate change as a major problem but fewer than 50% would be willing to pay an extra $2 per month on electricity bills to combat a warming world.

The U.S. EPA, for example, has stated that increasing our national recycling rate by seven percentage points would reduce greenhouse gas emissions by 9.8 million metric tons of carbon equivalent, roughly the same as the energy used by 1 million homes each year.

StopWaste, the public agency that leads materials recovery efforts for California’s Alameda County, notes that 4 tons of CO2 is kept out of the atmosphere for each ton of old corrugated containers kept out of the landfill.

And the American Chemistry Council has reported that all the PET and HDPE containers recycled in 2008 led to 2.1 million tons of carbon equivalent being saved due to recycled resin displacing virgin in the manufacturing process. That level of carbon savings is comparable to taking 360,000 cars off the road, according to a report from the group.

The realities of reducing material use get even more nuanced as we enter the realm of sustainable materials management, which aims to assess the whole life cycle of a package or product. For example, research from the Oregon Department of Environmental Quality has shown that in certain packaging applications, recyclable packaging isn’t always the best from a carbon emissions standpoint – a non-recyclable pouch that minimizes material use and weight, for example, could be a wiser selection than bulkier packaging that is widely recoverable or made with recycled content.

A similar sense of scientific analysis will be expected to be carried out around how we manufacture, use and handle materials. And the science is making it clear that if our ultimate goal is to maintain the well-being of Earth’s ecosystems and people, waste minimization is a far more important endeavor than waste diversion alone.

Taking the long view, such a strategy is also wise from a business standpoint.

The next generation of voters and decision-makers is making it clear that all choices we make must be viewed through the lens of limiting emissions to the greatest degree possible. If recycling programs and companies want to be ready to serve those leaders of tomorrow, they need to start looking through an “emissions first” lens right now.

Dan Leif is the managing editor of Resource Recycling. He can be contacted at [email protected]