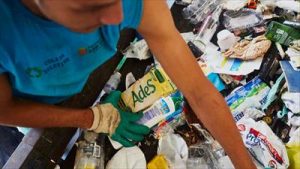 Unilever thinks the key to tackling multi-material flexible packaging waste may be to dissolve, separate and precipitate its PE content so it can be recycled. The giant brand owner plans to test the approach at a facility in East Java, Indonesia.

In May, Plastics Recycling Update first wrote about Unilever’s announcement that it will test the long-term commercial-scale viability of what’s called the “CreaSolv” process. The company will target pouches, bags and packets – items it refers to as “sachets.”

The CreaSolv process uses solvents to selectively dissolve targeted polymers so they can be separated from other plastics and contaminants. A precipitating agent is then used to recover the polymer from the solution so it can be recycled.

Multi-layer packaging isn’t the only challenging material being targeted with the technique. European companies in the EPS value chain are working to apply CreaSolv to the recycling of PS foam building insulation containing banned flame retardants.

When it comes to multi-material flexible packaging, Unilever officials recently provided additional details on their efforts. The company answered questions about the development of the process, its capabilities, limitations and next steps.

The CreaSolv process has been patented by the German Fraunhofer Institute for Process Engineering and Packaging IVV.

It was developed in 2003 as a method used to separate brominated flame retardants from e-plastics and and plastics from electrical appliances, according to a Unilever spokesperson.

“Around 2009, one of our material engineers came across this technology and questioned if it could be applied to multilayer plastic packaging,” the spokesperson wrote in an email.

Unilever worked with Fraunhofer to adapt and refine the technology, and the collaboration resulted in additional patents for new applications, the spokesperson said. The companies developed a new solvent so the process could be applied to multi-layer flexible packaging.

When asked how the process manages food residue, the spokesperson noted that material will be shredded and washed prior to entering the CreaSolv process. Additionally, the solvent is recirculated so it can be reused in the process.

Putting the process to work

The process of dissolving plastics so contaminants can be removed isn’t entirely new. Among several companies using the approach, Canadian company called Polystyvert uses essential oils to dissolve EPS, then recovers it from the solution so it can be recycled. Doing so removes contaminants and enables cost-effective transportation from collection point to processing plant.

Unilever noted solvent-based recycling isn’t new, but the application and methodologies vary. In Unilever’s case, the approach will be used to remove only PE from mixed-material packaging. PE was targeted because it makes up at least 60 percent of multi-layer flexibles in Indonesia, which is a critical country in which to tackle the issue of sachet waste, the spokesperson said.

In its announcement, Unilever’s chief research and development officer, David Blanchard, stated that the company intends to make the technology open source so other companies could use it. The spokesperson cited the MuCell extrusion and compressed aerosol approaches, both used to lightweight containers, as an example of technologies it shared.

“Providing open access to technologies creates the opportunity to create wider, systemic shift towards a circular economy,” the spokesperson said.

For CreaSolv, Unilever plans to build the pilot plant in East Java, Indonesia, a sprawling province home to roughly 40 million people. It’s capital is Surabaya, the second largest city in the country after Jakarta.

The spokesperson said the company would have a better idea of the facility’s throughput capacity as it completes plant construction. It is scheduled to come on-line later this year.