It is estimated that 95 percent of plastic packaging material is annually lost to the economy after a single use, with that material typically ending up in combustors or landfills, or polluting the ocean. This is tied to the poor profitability of recycling some grades of plastics, a long-term structural issue that is frustrating concerned citizens, governments, brand owners, and, of course, the waste management sector.

In response, stakeholders up and down the value chain are seeking expanded technological means of utilizing a commingled waste plastics stream to feed new plastics production – this approach has been referred to as chemical recycling or “advanced” plastics recycling. This is part of a vision of a circular economy for plastics, where the fossil hydrocarbon feeds for new plastics production would be replaced by molecules recovered from post-consumer wastes rather than recovered mixed plastics simply being used to manufacture less valuable products that themselves might not be recyclable.

NexantECA, an advisory firm for the chemical and energy sectors, recently released a report called “Olefins from Mixed Plastics Waste – Are Thermolysis Routes Viable?” The study analyzes the production of synthetic naphtha (via pyrolysis) and methanol (via gasification) from mixed plastics waste and the subsequent production of ethylene in different geographic regions under a consistent price scenario of the first half of 2020.

This article lays out some of the report’s key details.

Arriving back at olefins

Unlike mechanical recycling of plastics, thermolysis does not involve degradation of material properties on every cycle, since the method takes resins back to small molecules to rebuild the plastics “from scratch.” However, pyrolysis and gasification go about this business by entirely different means.

Many of the miscellaneous plastics comprising the No. 7 category also consume ethylene in their production.

How does thermolysis fit in? Olefins are produced by feeding the naphtha made in plastics pyrolysis into a steam cracker. Or they can be made by gasifying plastics, making methanol with the syngas produced, and making olefins using methanol-to-olefins technology. 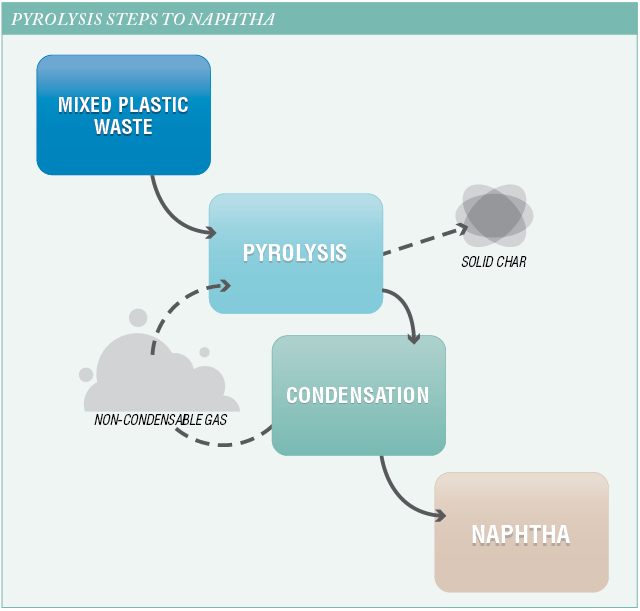 As illustrated above, pyrolysis involves the thermal decomposition of mixed plastics in an anaerobic process. A number of hydrocarbons are produced – as vapors, liquids and solids – and after condensation, the liquid stream can be used as is or separated into different components, depending on the application. Although only naphtha is shown in the diagram, other products could include fuels such as diesel, as well as waxes and other petrochemical products, including aromatics (see sidebar below).

As illustrated in the next diagram, gasification involves the thermal conversion in the presence of oxygen of mixed plastics to syngas, which is a reactive mixture of carbon monoxide, carbon dioxide and hydrogen. The ratios among these can be adjusted by reaction with steam, and gas cleanup is employed to match the needs of downstream processing.

Gasification generally operates at higher temperatures than pyrolysis, requires oxygen, and the char produced is typically recycled to be converted to syngas. The syngas produced can be used for the production of chemicals (such as methanol), as well as heat and power.

Olefins are now the largest end use of methanol due to the development of methanol-to-olefins processes, primarily in China, where the carbon source is coal. In other regions, such as the United States, the Middle East and Australia, methanol production is a way to monetize “stranded” natural gas reserves. The methanol produced in these scenarios is typically exported to consumers in populated areas or to where forest products are made. A large use for methanol is to make urea-formaldehyde resins that are used as the binder for plywood and particle board. 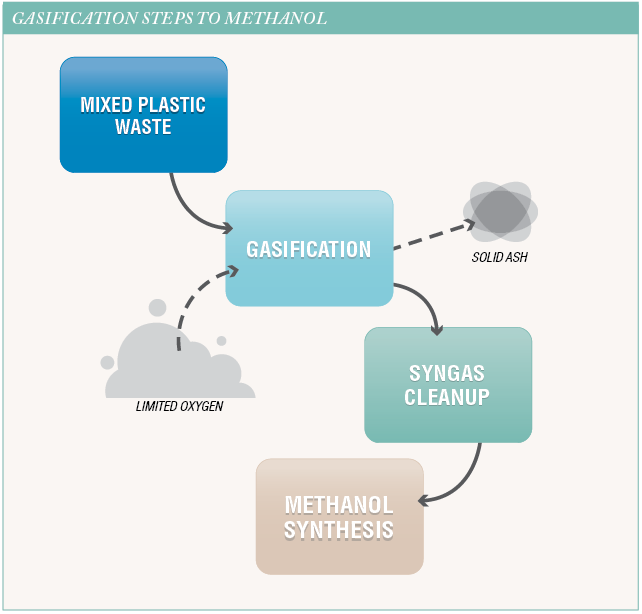 With an understanding of the basic science around pyrolysis and gasification, we can now move into some of the economic elements.

First is location. Thermolysis plants tend to be modular in design. There are many different factors that could affect the location of the thermolysis plant. Some of the key factors include:

In the case of gasification, there is no widely existing infrastructure for shipping the syngas produced, nor is it economically practical to build such. Therefore, a small-scale methanol plant would have to be built at the gasifier site and the methanol shipped to the next step in the value chain (a methanol-to-olefins operation, for example), or the gasification plant would need to be co-located with an existing methanol plant.

One way out of this restriction is using an auditable “book and claim” accounting system along with the well-established practice of commodity “swapping.” Imagine methanol is produced at location A, which may be very distant from a large, economically viable methanol-to-olefins facility. Any methanol conveniently available to that facility can be swapped for the methanol produced via gasification at location A. This methanol from location A can instead be sold into the general market most accessible to location A.

The large methanol-to-olefins facility could practice that kind of swapping with multiple locations using plastic-based gasification. The olefins it produces aren’t coming directly from recovered plastics, but end users of the plastic made from the olefins can nonetheless say that the production cycle is helping to advance the circularity of plastics.

Another key economic factor is how the thermolysis products will be utilized.

For example, in the case of pyrolysis, if the major product is fuel, then it would probably be best to locate the plant near the plastic waste source and sell the fuel to local customers. However, if the major product is naphtha, it can be shipped by several methods such as barge, rail and truck. Naphtha produced at refineries can be used directly on-site and is often captively consumed in the catalytic reformer process for producing gasoline and/or aromatics. However, it is less common for naphtha from a refinery to be integrated with a steam cracker for olefins production.

Other variables that will affect the economic viability of thermolysis using plastics include raw material costs, capital investments and capacity of a given plant.

In its study, NexantECA determined that in the United States, adding 25 percent of plastic-derived naphtha to a steam cracker produces ethylene at a cost that is only marginally above the market price. But such an operation could be fully profitable if a price premium of about 15 percent was put on the final product.

NexantECA believes that many brand owners would be willing to pay such a premium to be able to participate in a more robust way in the circular economy.

With regards to a plastics-based gasification for ethylene production in the United States, NexantECA concludes that this route is unlikely to be profitable under current conditions. However, NexantECA includes analyses of the sensitivity of cost of production, and thus, profits.to such key parameters as capital costs, utilities and net costs of the mixed plastics feedstock.

When it comes to feedstock costs, key factors include tipping fees and logistics costs, which are extremely variable with geographical location. Also, there is of course a vast difference between mixed plastics coming from different sources, and it matters greatly whether the loads have PET and HDPE removed

It’s also important to note that none of this accounts for the possibility of a carbon tax, trading regime or other policy driver. Action in this realm could be a game-changer on the economic viability of thermolysis approaches for plastics management.

In looking at various market considerations, the issue of bioplastics also comes up.

Many brand owners have sought bioplastics as a solution to the opposition they are seeing to single-use plastics, but bio-based resins have not been a panacea in the short term, and many stakeholders have lost faith they will be in the long term.

One major reason why can be seen in the case of PLA, which has not been adopted en masse for beverage bottles and has been restricted to applications such as coatings and some foodservice items. The lack of wider use is tied to the fact the PLA bottles in the stream in large numbers would make PET and HDPE recycling more problematic. However, plant-based plastics could be handled in thermolysis operations that use mixed plastics as feedstock. Thus, developing the technologies – and making sure that bioplastics are correctly diverted – could be a gateway to plant-based plastics growth.

The concept of a circular economy has taken on a life of its own for the short and medium terms. Already, we are seeing petrochemical giants such as BASF, Braskem, Dow and SABIC move ahead to feed renewable materials to olefins steam crackers.

And with the COVID-19 pandemic continuing to push new trends in how materials are being used, the pressure for solutions is only growing. Most disposable masks, gowns and protective suits are made of non-woven polypropylene, and takeout and e-commerce are bringing more single-use plastics to American doorsteps.

In addition, we are continuing to see efforts in various industries to reduce carbon footprints and address the ocean plastic pollution problem. In short, governments, NGOs and companies are desperate to implement strategies that will manage plastics more effectively. Thermolysis could be an important part of the picture.

Ron Cascone, who was principal at NexantECA, died on March 5 after a long battle with cancer.

Marisabel Dolan is a senior consultant at NexantECA. and can be contacted at [email protected]

Since 1965, NexantECA has offered techno-economic assessments in energy, chemicals, plastics and renewables. The firm has recently used this base of knowledge, experience and data to work globally with brand owners and others to evaluate various technologies for mechanical, chemical and thermal plastics recycling approaches. NexantECA’s thermolysis report is the latest in a series on the theme of recycling of waste plastics, including a 2019 special report, “Sorting through Plastic Waste – Is Chemical Recycling a Solution?” Find more at nexanteca.com.